President Bush Appoints Henry Kissinger to Head 'Independent' Commission to Investigate 9-11: Kissinger Was Involved in the Bombing of Vietnam, Cambodia and Laos (Deaths: More Than 2 Million); the Ove

No, it’s not September 11, 1973, the day democratically elected Chilean President Salvadore Allende died in the palace as the Pinochet regime rose to power. A regime backed by President Richard Nixon and then-Secretary of State Henry Kissinger.

It’s September 11, 2001. Kissinger will investigate why the government failed to prevent the worst attack on the US since Pearl Harbor.

Henry Kissinger served as secretary of state under Presidents Richard Nixon and Gerald Ford. He has been heavily criticized for his involvement with the overthrow of the democratically elected leader of Chile, President Salvador Allende; for the secret, illegal bombing of Cambodia in 1969; and the approval of US military support for the Indonesian invasion of East Timor in 1975.

Kissinger has served in every Republican administration since the 60s.

In the early 80’s he founded Kissinger Associates. As the head of the influential consulting firm, he has represented multinational corporations, including Coca-Cola, American Express, Anheuser-Busch, and ITT.

White House officials say Kissinger will not resign as chairman of the firm, and will not be required to release the names of his current clients. Fred Wertheimer is President of the nonprofit campaign finance group Democracy 21. He told the New York Times Kissinger should leave his consulting business until the commission’s work is done. He said Kissinger is “extremely likely to wind up in conflicting positions given the business relations he appears to have around the world.”

The New York Times reports Kissinger has used his relationships with current administration officials including Vice President Dick Cheney, to get closer to President Bush. Kissinger was evidently invited to the White House over the last year for a series of lunches with Bush and Cheney. White House advisors say Cheney was the first to raise the idea of approaching Kissinger for the 9-11 position.

sThe reaction to Henry Kissinger’s appointment has been fierce. Steven Aftergood is a government secrecy expert at the Federation of American Scientists. He told Reuters: “’Kissinger is not distinguished as an impartial judge of government misconduct, to put it mildly. To the contrary, he is an investigatee, not an investigator, and one who has stubbornly resisted the disclosure of official information to members of Congress, courts of law, private researchers, and others.”

The Reporters Committee for Freedom of the Press sued Kissinger over access to his official papers as national security advisor and secretary of state, and lost in the US Supreme Court. The Committee’s executive director Lucy Dalglish told Newsday: “I honestly don’t think he has a stellar track record for this [assignment]… My concern is his propensity for secrecy, which unfortunately fits too well the pattern of the current White House.”

Democratic leaders in Congress immediately named George Mitchell as vice chairman of the 9-11 committee. Mitchell is the former Senate majority leader and peace envoy to Northern Ireland and the Middle East.

Well today we’ll take an in-depth look at Henry Kissinger’s record. We turn now to a documentary called 'The Trials of Henry Kissinger.' The film is directed by Eugene Jarecki, written by Alex Gibney, and narrated by Brian Cox. 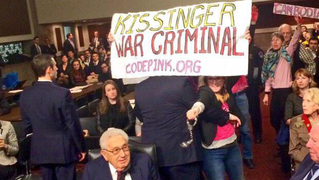