From COINTELPRO to the Shadow Government: As Fred Hampton Jr. Is Released From 9 Years Ofprison, a Look Back at the Assassination of Fred Hampton

In a moment we are going to hear from Fred Hampton Jr., who was recently released from prison in Illinois where heserved 9 years on charges of “aggravated arson” following the nationwide protests in 1992 after the acquittal of theLA police officers who beat Rodney King. Fred Hampton Jr. is the son of Black Panther leader Fred Hampton who wasassassinated on December 4, 1969 in a COINTELPRO operation in Chicago. We begin this part of the program by going tosome rare archival footage of Fred Hampton shortly before his assassination. His words are then followed by his wifedescribing his killing. Here is Fred Hampton speaking in the late 1960’s.

A group of Hip Hop activists has just kicked off a nationwide tour aimed at educating young people on issueseffecting Black and Latino communities-the prison industrial complex, police brutality and the struggles to freepolitical prisoners. The tour is called Dare to Struggle, Dare to Win and it features Fred Hampton Jr. whose fatherwas assassinated on December 4, 1969 in Chicago as part of the FBI’s COINTELPRO operations. Fred Hampton Jr. was acommunity organizer working with the National People’s Democratic Uhuru Movement. Following the Simi Valley verdictin 1992 which acquitted 4 white police officers of the beating of Rodney King, rebellions broke out across the US.The corporate media called them riots. Fred Hampton Jr. was arrested on charges of aggravated arson, convicted andsentenced to 18 years in prison. An international campaign to free Hampton was launched and on September 14, 2001, hewas freed from prison. Now he is touring the country with hip hop artist Mutulu Olugabala from the rap group DeadPrez and Rosa Clemente. She is co-host and producer of Pacifica station WBAI’s “Where We Live” program. She wasrecently named by Red Eye magazine as one of the 50 top Hip-Hop activists to look out for in 2002.

Web ExclusiveDec 04, 2014WATCH: “The Assassination of Fred Hampton: How the FBI and Chicago Police Murdered a Black Panther” 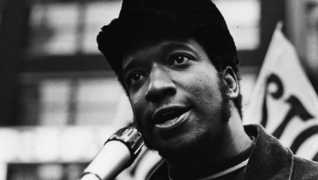 WATCH: “The Assassination of Fred Hampton: How the FBI and Chicago Police Murdered a Black Panther”