Halliburton, Bechtel and Other U.S. Firms Set to Profit From the Rebuilding of Postwar Iraq: Meanwhile the Guardian Reports Halliburton Is Still Paying VP Dick Cheney Up to $1 Million Annually

The Wall Street Journal is reporting the Bush administration is preparing to award a contract valued at upwards of $900 million to a U.S. firm to rebuild post-war Iraq.

USAID invoked special authority to bypass the usual procedures and solicit bids from just these select companies. Spokeswoman Ellen Yount told the Washington Post skirting the rules was justified due to the “urgent circumstances and the unique nature of this work.”

The Toronto Star is reporting international firms from countries that are not publicly backing Washington’s on Iraq are also expected to be prevented from profiting on the reconstruction of Iraq.

The Pentagon already has tapped Halliburton subsidiary Kellogg Brown & Root to help fight oil-well fires in Iraq. Halliburton is the company Vice President Dick Cheney headed until 2000. The London Guardian reports today vice President Cheney is still receiving annual payments from Halliburton. Halliburton refused to say how much the payments are. The required disclosure statement filled by all top government officials says only they are between $100,000 and $1 million.

The Toronto Star,/I> is reporting that the Canadian company Safety Boss Inc., a which specializes in capping burning oil wells, is likely not to see much business in a postwar Iraq although it did such work in Kuwait after the first Gulf War.

The company’s chief executive told the Toronto Star, “It’s a big political football. We could be left out because we’re in Canada and the political waffling here isn’t helping.”

StoryAug 30, 2011Ex-Bush Official Col. Lawrence Wilkerson: “I am Willing to Testify” If Dick Cheney is Put on Trial

The original content of this program is licensed under a Creative Commons Attribution-Noncommercial-No Derivative Works 3.0 United States License. Please attribute legal copies of this work to democracynow.org. Some of the work(s) that this program incorporates, however, may be separately licensed. For further information or additional permissions, contact us.
NEXTMarked for Death: How the SAT Can Recruit You for the Military 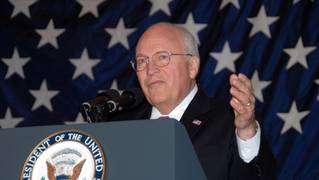 Ex-Bush Official Col. Lawrence Wilkerson: “I am Willing to Testify” If Dick Cheney is Put on Trial