We speak with the author of “Confessions of an Economic Hit Man” about his former work going into various countries to create a secret empire through economics after being recruited by the National Security Agency. Perkins discusses the policy in the context of the recent WTO meetings, the NYC transit strikes, and U.S. economic interventions in Latin America. [includes rush transcript]

StorySep 16, 2022“The Myth of Normal”: Dr. Gabor Maté on Trauma, Illness and Healing in a Toxic Culture

AMY GOODMAN: We turn now to John Perkins, returning to our airwaves, author of Confessions of an Economic Hit Man. Years ago, he wrote the words: “Economic Hit Men (E.H.M.s) are highly paid professionals who cheat countries around the globe out of trillions of dollars. They funnel money from the World Bank, the U.S. Agency for International Development, and other foreign so-called aid organizations into the coffers of huge corporations and the pockets of a few wealthy families who control the planet’s natural resources. Their tools include fraudulent financial reports, rigged elections, payoffs, extortion, sex and murder. They play a game as old as empire, but one that’s taken on new and terrifying dimensions during this time of globalization. I should know,” John Perkins writes, “I was an E.H.M., an economic hit man.” Welcome to Democracy Now!

AMY GOODMAN: Well, since we have last talked, many things have taken place, from the World Trade Organization meetings in Hong Kong to Evo Morales being elected in Bolivia to the New York City transit strike. Can you talk about the connections you see?

JOHN PERKINS:I think we’re seeing a real change in consciousness, which is something we called for here last year about this same time. One of the reasons I wrote the book — because people need to be aware —- where you live in a democracy, and people need to be aware of what’s going on, and I think increasingly people are becoming aware of that. Yes, Bolivia voted for Evo Morales, who ran on a very strong anti— corporation, anti-U.S. platform; and now Evo Morales becomes one of seven presidents in South America, representing over 80% of the population of South America who have voted — presidents who have gone into office because they opposed American policy.

We see in the New York transit strike, laborers standing up to the corporatocracy, saying, 'We deserve to have pension funds. We deserve to have health care. We deserve to have benefits.' And, yes, at the World Trade Organization in Hong Kong, we basically saw the corporatocracy beaten. In the end, they put together, you know, a statement that made it sound like things were all hunky-dory; but, in fact, the developing countries really one in that one. Of course, that started in '99 in Seattle and then again in 2003 in Cancun with the World Trade Organizations there. So, I think in the last year we've seen a tremendous rise in consciousness among people that we want to move into new directions, becoming more democratic, make our leaders respond in democratic ways.

AMY GOODMAN: When you talk about yourself as an economic hit man, explain very briefly. Though we have spoken before, for people who didn’t hear that conversation, talk about your work as a consultant.

JOHN PERKINS: Well, as an — we economic hit men, basically in the last four decades, have managed to create the world’s first truly global empire; and I talk in detail in the book, Confessions of an Economic Hit Man, about this and in various countries where we went in to create this first truly global empire. We’ve done it primarily without the military. The military comes in only as a last resort. We’ve done it through economics, and we’ve done it very, very subtly, so it’s been a secret empire, unlike all of history’s previous empires. Most Americans don’t realize that we’ve created this empire. They don’t realize what we’ve done in Latin America.

And the way economic hit men work, we use many different techniques, but probably the most typical is that we’ll identify a company [country] that has resources that corporations covet, like oil. We’ll arrange a huge loan from an organization like the World Bank for that country; but the money won’t go to that country at all. It goes to big U.S. corporations — Bechtel, Haliburton, ones we all hear about all the time — to build infrastructure projects in that country.

These projects, like industrial parks and power plants, benefit the very rich of those countries and do nothing for the poor, except to leave the country in a huge debt, one it can’t possibly repay, which means it can’t give social services, education, health to its poor, and it’s put in a position where it doesn’t repay its debts; so, at some point, we economic hit men go back in and we say: 'Look, you can't repay your debts, so give us a pound of flesh. Sell oil to our oil companies real cheap or vote with us at the next U.N. vote, or send troops in support of ours some place in the world.’ And that’s how we’ve created this empire; and we’ve done it without most Americans even realizing that it’s happening.

AMY GOODMAN: And explain who you were working for.

JOHN PERKINS: Well, I was recruited by the National Security Agency, the agency that’s getting so much attention right now because of spying on Americans, while I was still in college at Boston University; and the National Security Agency put me through a series of very extensive tests, including lie detector tests, personality tests. And I was in business school. They determined that I could be a good economic hit man.

They also discovered a lot of weaknesses in my character (I like to think of them as kind of the big — the three big drugs of our culture: money, power, and sex) that they could use as a hook to bring me in. So, I was told from the very beginning by this amazing woman, Claudine, (who’s described in detail in the book) who is basically my trainer that, 'Look, you're going into a dirty business. Once you’re in, you can never get out of this business; but we’re going to make it very attractive for you to go into this business.’

JOHN PERKINS: No, I never worked directly for the N.S.A., I worked for a company called Chas T. Main, big consulting firm out of Boston. And these days almost all of this work is done by private contractors. It’s not done directly by the C.I.A. or the N.S.A. They may recruit us, but we work for private industry.

The same is true of the jackals, Amy. If economic hit men fail, which we don’t usually do (but I did in Panama, for example, and I tell in detail in the book about how that ended up) — but my failure ended up in a jackal going in and assassinating Omar Torrijos, the president of Panama. When economic hit men fail, the jackals go in and either overthrow governments or assassinate leaders; and they, too, do not work directly for the government. These days, they’re private contractors. The days of the government agent, the 007, who’s licensed to kill, are long gone.

AMY GOODMAN: When you say you failed, you mean what?

JOHN PERKINS: Well, I was sent in to Panama to bring Omar Torrijos around, to bring him into our system, and he refused to do that. He said, 'Look, I know if I play your game' — he told me directly — 'If I play your game, I'll become very rich. But that’s not what interests me. I want to help my poor people.’ And, so he said, 'You can either get out of Panama or play the game my way.' Well, we decided to stay and try to bring him around. He never would come around. And I knew all along that if I failed to bring this man around something dire would happen to him. And, you know, this is what’s going on in Latin America right now. Evo Morales is being visited this week by an economic hit man who’s going into his office saying, ’Congratulations, Mr. President — ’

AMY GOODMAN: Who? Who is he being visited by?

JOHN PERKINS: Well, an economic hit man who has to remain nameless at this point, but —

AMY GOODMAN: Well, we’re going to leave it there for right now; but this is just part one of our conversation, as we come to the end of our hour. We’re talking to John Perkins. Confessions of an Economic Hit Man is his book, from a man who’s done it, who’s been there, who calls himself an economic hit man. 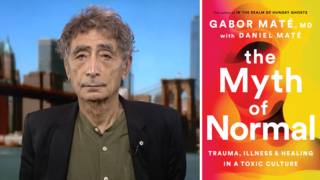