The Israeli linguist, author and peace activist Tanya Reinhart has died of a stroke at the age of 63. Reinhart was one of the most outspoken critics of Israeli government policies and one of Israel’s leading advocates for Palestinian national rights. We play an excerpt of a speech she recently gave in New York and her comments in a 2004 Democracy Now! interview. [includes rush transcript]

Web ExclusiveMay 13, 2021Nathan Thrall on “A Day in the Life of Abed Salama” & Reality of Palestinian Life Under Israeli Rule

AMY GOODMAN: We end today with the Israeli linguist, author and peace activist Tanya Reinhart, who died this weekend of a stroke here in the United States at the age of 63. Tanya Reinhart was one of the most outspoken critics of Israeli government policies and one of Israel’s leading advocates for Palestinian national rights. She was professor emeritus of linguistics and media studies at Tel Aviv University and global distinguished professor of linguistics at New York University. She wrote columns for Israel’s largest daily newspaper, Yediot Ahranot, and had an active following of readers around the world for her critical perspectives on the Israel-Palestine conflict. Her books include Israel-Palestine: How to End the War of 1948 and The Road Map to Nowhere. In December, she moved permanently to New York, saying she could no longer live in Israel due to its treatment of Palestinians in the Occupied Territories. Tanya Reinhart last appeared on Democracy Now! in October of 2004.

TANYA REINHART: And what I believe, like many Israelis, is that the way is to start a new page, to get out of the Occupied Territories and to live side by side with the Palestinians.

AMY GOODMAN: That was Tanya in October of 2004. In that broadcast, Juan Gonzalez, co-host of Democracy Now!, asked her about Democratic politics. We then are going to play a speech that she recently gave here in New York, just a few weeks ago during Israeli Apartheid Week. But this was Tanya Reinhart in 2004.

TANYA REINHART: … will, peaceful intentions. And as long as this is the perspective, he can do whatever he wants in Gaza. He can do just the most horrible things, and it’s true that the present actions of Israel in Gaza are getting much less attention than what happened in Jenin.

TANYA REINHART: Yeah. Well, the biggest problem, of course, is that both candidates fully back Israel. The Democrats are never different on that issue than the Republicans. So, none of what Israel has been doing would have been possible without the stable and constant U.S. support. So, it’s been an axiom in U.S. politics that you don’t touch Israel. Or if you do, you only can mention Israel’s right to exist, but not the Palestinians’ right to exist.

So, although this is not a change, Israeli policy has changed. So we’re not now talking just about supporting the occupation, but supporting the atrocities, the daily killing of Palestinians. And since the situation has changed, it would be appropriate to hear more of the Democratic candidates also criticizing Israel.

AMY GOODMAN: Tanya Reinhart, giving one of her last speeches, actually, just over a month ago. That discussion we had in October 2004. But she was just here in New York at St. Mary’s Church. She was speaking as part of Israel Apartheid Week.

Just two years ago, the Western world hailed “the best of democracy in the Middle East” with Arafat departing and the Palestinian people getting ready for their elections. According to Jimmy Carter, in a report he wrote in the Herald Tribune, the Palestinian elections were, I quote, “honest, fair, strongly contested, without violence and with the result accepted by winners and losers.” Among the 62 elections that had been monitored by the Carter Center, these are among the best in portraying the will of the people.

In a just and well-ordered world, it would be unthinkable that a government that was elected in this kind of a process will be ignored just because Israel does not like the choice of the Palestinian people. But in a world in which the U.S. rules, might is right, and might can define democracy as it wills. Thus, it was announced that the outcome of the Palestinian elections will not be recognized, and until this changes, the Palestinian people as a whole should be punished and starved.

What we see now, since then, is that the U.S. is trying, together with Israel, to impose a long-standing policy that they have always had of trying to push the society into civil war. They are doing this in Palestine by supporting collaborating forces like the forces of Dahlan in Gaza. They are trying to do the same in Lebanon. They are trying this in Iraq. This is the U.S. policy.

The way this is packed is the demand of the Palestinian — the Palestinians are demanded to meet the quoted three demands, the three mantras that keep repeating. The first mantra is that the Palestinians should renounce violence, specifically Hamas should renounce violence. It’s very hard to understand the content of this demand. Already in January 2005, when the Hamas announced that they are — Hamas announced that they are going to move from armed struggle into political struggle and enter the elections, and since then, there wasn’t a single terror attack perpetrated by the Hamas. According to Israeli security sources, the Hamas didn’t even participate in launching of Qassams to Israel until the events of last summer, when Israel attacked Gaza.

The second demand is that the Palestinians should recognize previous accords. In an interview with The Washington Post already a year ago, Hamas Prime Minister Haniyeh explained that according to the Oslo Accords in 1993, five years later in ’98, there should have been already a Palestinian state. Instead, what Israel did during this whole period was appropriate more land, continue to colonize, to build settlements, and it did not keep a single clause of the Oslo Agreements. “From now on,” Haniyeh said, “we will only accept and respect agreements that are good for the Palestinian people.”

AMY GOODMAN: Tanya Reinhart, the former Tel Aviv University professor, moved to New York in December, saying she could no longer live in Israel due to its treatment of Palestinians. The Israeli professor, linguist, author, activist died Saturday of a stroke at the age of 63. 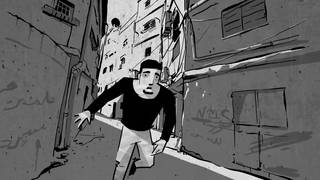