A network of over 150 immigrant organizations across the country have launched a boycott of money transfer giant Western Union. The organizations accuse Western Union of charging immigrants exorbitant fees and non-standard exchange rates when they try to send money home. We speak with a coordinator for the Transnational Institute for Grassroots Research and Action, the umbrella organization coordinating the Western Union boycott. [includes rush transcript]

JUAN GONZALEZ: Immigration reform might have died in the Senate earlier this summer, but the movement for immigrant rights is very much alive. Although Democratic hopefuls at the first Spanish-language presidential debate broadcast Sunday focused on the importance of border security, immigrant rights advocates aim to steer the debate in another direction. They are emphasizing the economic security of migrant workers.

A network of over 150 immigrant organizations around the country have launched a boycott of money transfer giant Western Union. The organizations accuse Western Union of charging immigrants exorbitant fees and non-standard exchange rates when they try to send money home. The boycott organizers say that Western Union’s annual profit of over $1 billion comes from the fees paid on remittances sent by migrant workers to their home countries. Yet, Western Union, they say, reinvests only 41 cents for every $100 of profits back into these immigrant communities.

AMY GOODMAN: Kayhan Irani is the New York-New Jersey coordinator for TIGRA, or the Transnational Institute for Grassroots Research and Action, the umbrella group coordinating the Western Union boycott, joining us now in New York. Welcome to Democracy Now!

KAYHAN IRANI: So the Transnational Institute for Grassroots Research in Action is working with, like you said, over 150 immigrants’ rights groups in America and overseas. We aim to get justice for immigrants and allow them to build the wealth that they have in their communities. You have over $236 billion going around overseas from folks who are working in different countries, going to their families to support them for basic needs. This is not — no one’s buying a second car with this money. No one’s buying a fur coat. This is for healthcare. This is for housing. This is for adequate education. And these basic needs are being charged exorbitant rates. The people are really being taken advantage of. Their love, their commitment to their family is what’s driving the profits of this company. And it’s really sad to see Western Union completely withdrawing from any type of responsibility, and so we want to hold them accountable.

JUAN GONZALEZ: Now, my understanding is that Western Union has gotten into this position, because in many places in the third world, where a lot of towns don’t have banks, but there will be three or four Western Union offices, so they are like the main transmitters of money?

JUAN GONZALEZ: When you talk about exorbitant fees, what are you talking about?

KAYHAN IRANI: So, for example, to send money home to someone, you can get charged between $15 and over $20. But the fees cost Western Union about $3 to $4. So the markup is huge over — again, over something that is not a luxury item. Sending money home is not a luxury item. Low-wage workers who need to support families in other countries, who have been torn apart from families, shouldn’t be charged five — four and five times what it costs Western Union to send a remittance. It’s completely ridiculous. And all the money goes back into Western Union. The billions of dollars of profits, $1.3 billion in operating profits that they made, doesn’t go back to the community, it goes into the pockets of the corporation.

AMY GOODMAN: We asked Western Union to respond to the boycott. I want to play an audio recording of this statement from Daniel Diaz, a Western Union spokesperson.

DANIEL DIAZ: We are proud to provide fast, reliable, trusted customer service at competitive prices in a market with more choices than ever before. These choices have led to lower costs across our industry. We take pride in the role that Western Union plays in empowering communities everywhere, by making it possible for immigrants to support their families and give back to those they love most. Finally, we’re proud of the direct engagements we’ve made with communities and partnerships we’ve formed to take action and support programs that empower individuals to become more self-sufficient. At Western Union, we’re committed to serving our consumers worldwide.

JUAN GONZALEZ: Well, I’d like to get your response to that comment, but also I understand that even some international organizations like the World Bank and others have questioned these Western Union rates and the impact it’s having on transmittals.

KAYHAN IRANI: Yes. In fact, the World Bank has said that if Western Union lowered their fees by a third, they would still be making plenty of money, that they would still have healthy competition and have a healthy profit margin over their competitors. The industry itself is inflated. The industry itself if being allowed to profit hugely, because no one has been raising their voice. This is the money. This is the love. This is the commitment of millions of people who have been ripped apart from their families, who have to go work in other countries and who work low-wage jobs. These are not rich people.

I went to an ESL class yesterday to talk to some folks out in Queens, and when I asked them, I said, “Are you guys millionaires? How do you see immigrants? Do you think immigrants are rich, immigrants have financial power?” And they all said, “No, no. We’re not rich. We’re poor.” And I said, “Well, what about the $232 billion that you have? Because that’s how much you sent over the last year.”

AMY GOODMAN: I was reading a piece by Francis Calpotura from Foreign Policy in Focus called “Remittances: For Love and Money.” Interesting figure: Studies show if money transfer fees were cut in half, 33 million people could be lifted out of poverty in the developing world. That’s for money transfer fees overall.

KAYHAN IRANI: Right. That’s the industry. And there you have it. It’s completely ridiculous. It’s really sad to see Western Union’s comment about, you know, how they help immigrants build wealth and how they are giving back to the community and how they’re very happy to empower the community, except when it comes down to it. Thirty-three million people could be lifted out of poverty, and they’re fighting over change. Western Union reinvests 41 cents for every $100 of profit back into the community. That’s abysmal. 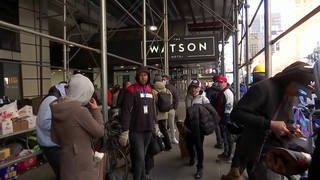