Tensions are rising in Zimbabwe as official presidential election results have still not been announced. Opposition leader Morgan Tsvangirai claims he won the poll against President Robert Mugabe but said he would not claim victory until the official count by the Zimbabwe Electoral Commission was known. We speak with Gerald LeMelle of Africa Action and journalist and political activist, Grace Kwinjeh. [includes rush transcript]

StoryJan 10, 2020The Weaponization of Data: Cambridge Analytica, Information Warfare & the 2016 Election of Trump

AMY GOODMAN: In Zimbabwe, the prospects for a presidential election run-off appear more likely after the state-owned Herald newspaper said President Robert Mugabe failed to win a majority for the first time in nearly three decades.

The first official indication of the result of Saturday’s election says neither Mugabe nor his main challenger, Morgan Tsvangirai, gained 50 percent of the vote, which would be needed to avoid a run-off. Tsvangirai says he won the poll but said he would not claim victory until the official count by the Zimbabwe Electoral Commission, or ZEC. On Tuesday, he denied widespread speculation that his party, the Movement for Democratic Change, is in talks to arrange Mugabe’s departure.


MORGAN TSVANGIRAI: Let’s not be influenced by speculation. There is no discussion, and therefore this is just a speculative story. Please, let’s wait for ZEC to complete its work, and then we can discuss the second sentence that will affect the people.

AMY GOODMAN: Tsvangirai said he would release his tally of the presidential result on Wednesday. No official results have been announced four days after the polls closed, fueling suspicions of rigging. Fears are growing that prolonging the declaration of results could lead to violence. Roadblocks have been set up around the capital, Harare, and there has been a marked increase in the presence of paramilitary police on the streets of major cities.


Gerald LeMelle is executive director of Africa Action. He joins us from Washington, D.C. Welcome to Democracy Now!


GERALD LEMELLE: Thank you for having me, Amy.


AMY GOODMAN: Can you tell us the latest?


GERALD LEMELLE: Well, there is a lot of confusion, but the latest we’ve been able to discern from the various sources is that Zanu-PF actually, according to unofficial sources within Zanu-PF, actually agree that Robert Mugabe did lose the election, but that he lost by 48 to 42 percent, which means that under Zimbabwe law there would be a run-off. You have to get over 50 percent in order to win. Of course, the MDC and Tsvangirai say that this is not the case, that he won outright, and he’s going to release his results sometime today.


The interesting thing, though, Amy, is that Robert Mugabe has not made any comments. The Zimbabwe Congress of Trade Unions suggested in an email that Mugabe would be speaking today, but there was no confirmation or no indication of where this information came from.


AMY GOODMAN: Can you talk about the significance of this election for the people of Zimbabwe, Gerald?


GERALD LEMELLE: Yeah. After three very troubled elections, I think the people of Zimbabwe deserve to have their voices heard. It’s very similar to the situation in Kenya and other elections around the continent. African people want to participate in the election of their leadership, and they want their leaders to be accountable. And Zimbabwe has not had this in the last several elections. Each election has been — resulted in extreme amounts of violence. The good news about this particular election is that there has not been as much violence, if any. There have been the typical of shenanigans that we see in elections past, but there has been no violence. And for civil society groups, this is very, very important. It’s a very important election, and it’s an indication that perhaps they may have some say in their future.


AMY GOODMAN: We’re also joined on the telephone from South Africa by Grace Kwinjeh, a journalist and political activist, founding member of Zimbabwe’s main opposition party, Tsvangirai’s party, the Movement for Democratic Change. Can you tell us the latest, as you understand it, Grace?


GRACE KWINJEH: Well, basically, I think what has happened in Zimbabwe over the past few days is not only welcome, but really historic, in the sense that Zimbabweans have struggled a lot over the past eight years. If you know that inflation is the highest in the world, it’s 1,050 — if you look at the health and education systems, they have all but collapsed. And so, the events of the past days have really been historic.


AMY GOODMAN: What about these rumors that there is some negotiation around Robert Mugabe’s departure?


GRACE KWINJEH: Well, if I’m hearing you correctly, it’s going to be quite a decisive factor, in the sense that they’re going to concede defeat and are going to allow for the people’s will to be — to triumph. And so, I think those are [inaudible] the ground that the MDC leadership and the rest of the civic leadership is having to tread on at the moment.


AMY GOODMAN: And the significance if Robert Mugabe was to step down? He has been the only elected leader since 1980.


GRACE KWINJEH: Yes, he has, and I think by the shows — the result — overstayed his welcome. But what is quite clear is that, from some of the discussions, there’s a fear of retribution. And I think what the opposition has sought to [inaudible] over the past few days to assure that, so there’s not going to be a retribution campaign and that they just want a smooth transition.


AMY GOODMAN: Why are you in Johannesburg as opposed to Zimbabwe, Grace?


GRACE KWINJEH: Well, I’m in exile here. We are more than three million of us who are outside in exile, who are watching with quite a big interest the events at home, because it actually means we might be able to go back home. It actually means we might be able to get our lives back. And if you look at the situation [inaudible], people, Zimbabweans in exile, we have teachers who are sweeping floors; we have doctors who are babysitting. And so, there is a lot of us, professional, qualified doctors, qualified lawyers, who are doing manual work just for survival. And going back to Zimbabwe, being part of reconstruction efforts in Zimbabwe is something that has suddenly presented itself as a big opportunity.


AMY GOODMAN: Why do you have to oppose the government from outside? Why can’t you live in Zimbabwe?


GRACE KWINJEH: Well, I left after I was tortured on the 11th of March, and if you — 11th of March, 2007, together with the civic and opposition leaders. We included Dr. Lovemore Madhuku, Mrs. Sekai Holland, Mr. Nelson Chamisa, [inaudible] Morgan Tsvangirai himself. If you look at the statistics of Zimbabweans who are outside, at least a third of those who are outside here are direct victims of Mugabe’s terror. We really had no choice but to come outside and to continue campaigning against the dictatorship.


AMY GOODMAN: And, Gerald LeMelle, executive director of Africa Action, you mentioned Kenya and comparisons. We just got this in: Kenyan police firing tear gas at dozens of protesters, including Nobel laureate, Wangari Maathai, during a demonstration in the capital of Nairobi, the rally held against plans by the current President Mwai Kibaki to boost the number of ministers in the new cabinet. President Kibaki wants to increase the cabinet positions, but the opposition leader Raila Odinga insists the number should remain at thirty-four or less. The rivals agreed to share power in February after the disputed elections there. Do you have any latest in Kenya?


GERALD LEMELLE: No, other than what you just said. I mean, it’s incredible that Wangari Maathai has to suffer through the excesses of brutality from the Kibaki regime.


AMY GOODMAN: Well, I want to thank you both for being with us. Gerald LeMelle of Africa Action, organization whose mission is to change US-Africa relations to promote political, economic and social justice in Africa; and Grace Kwinjeh, thanks so much for joining us from South Africa. She is a founding member of Zimbabwe’s main opposition party, the Movement for Democratic Change. 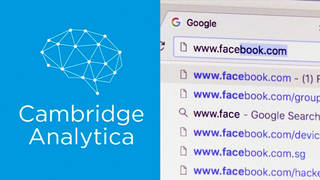 The Weaponization of Data: Cambridge Analytica, Information Warfare & the 2016 Election of Trump