As many as 250,000 people flooded the National Mall in Washington, DC, Saturday for a rally that billed itself as the “Million Moderate March.” The Rally to Restore Sanity and/or Fear was organized by the hosts of Comedy Central programs The Daily Show and The Colbert Report. We air parts of Jon Stewart’s keynote speech on fearmongering and the corporate media, as well as an exchange with basketball legend Kareem Abdul-Jabbar on Islamophobia. Actor Sam Waterston also reads a poem by Stephen Colbert. [includes rush transcript]

AMY GOODMAN: As many as 250,000 people flooded the National Mall in Washington, DC Saturday for a rally that billed itself the Million Moderate March, a gathering for people who are politically dissatisfied but not ideological. The Rally to Restore Sanity and/or Fear was organized by Jon Stewart and Stephen Colbert, the hosts of the Comedy Central programs The Daily Show and The Colbert Report. The attendance at Saturday’s gathering easily outstripped the number of people at the “Rally to Restore Honor” called by right-wing Fox News host Glenn Beck in August, which drew an estimated 87,000 people. The crowd also exceeded the numbers at the progressive “One Nation Working Together” rally organized earlier this month by labor and civil rights groups.

The rally included several musical performances, celebrity appearances, and comedic interludes by Jon Stewart and Stephen Colbert, but the main target of the event was the corporate media. In his closing speech, Stewart described the media as, quote, “the country’s twenty-four-hour political pundit perpetual panic conflictinator.”

JON STEWART: I’m really happy you guys are here, even if none of us are really quite sure why. So, what exactly was this? I can’t control what people think this was. I can only tell you my intentions. This was not a rally to ridicule people of faith or people of activism or to look down our noses at the heartland or passionate argument or to suggest that times are not difficult and that we have nothing to fear. They are, and we do. But we live now in hard times, not end times. And we can have animus and not be enemies.

But unfortunately, one of our main tools in delineating the two broke. The country’s twenty-four-hour political pundit perpetual panic conflictinator did not cause our problems, but its existence makes solving them that much harder. The press can hold its magnifying glass up to our problems, bringing them into focus, illuminating issues heretofore unseen. Or they can use that magnifying glass to light ants on fire and then perhaps host a week of shows on the sudden, unexpected dangerous flaming ant epidemic. If we amplify everything, we hear nothing.

There are terrorists and racists and Stalinists and theocrats, but those are titles that must be earned. You must have the résumé. Not being able to distinguish between real racists and Tea Partiers or real bigots and Juan Williams or Rick Sanchez is an insult, not only to those people, but to the racists themselves, who have put in the exhausting effort it takes to hate — just as the inability to distinguish terrorists from Muslims makes us less safe, not more.

The press is our immune system. If it overreacts to everything, we actually get sicker, and perhaps eczema. And yet, with that being said, I feel good — strangely, calmly, good —- because the image of Americans that is reflected back to us by our political and media process is false. It is us through a funhouse mirror, and not the good kind that makes you look slim in the waist and maybe taller, but the kind where you have a giant forehead and an [bleep] shaped like a month-old pumpkin and one eyeball. So, why would we work together? Why would you reach across the aisle to a pumpkin—[bleep] forehead eyeball monster?

If the picture of us were true, of course our inability to solve problems would actually be quite sane and reasonable. Why would you work with Marxists actively subverting our Constitution or racists and homophobes who see no one’s humanity but their own? We hear every damn day about how fragile our country is, on the brink of catastrophe, torn by polarizing hate, and how it’s a shame that we can’t work together to get things done. But the truth is, we do. We work together to get things done every damn day!

The only place we don’t is here or on cable TV. But Americans don’t live here or on cable TV. Where we live, our values and principles form the foundation that sustains us, while we get things done, not the barriers that prevent us from getting things done. Most Americans don’t live their lives solely as Democrats, Republicans, liberals or conservatives. Americans live their lives more as people that are just a little bit late for something they have to do — often something they do not want to do, but they do it. Impossible things every day that are only made possible through the little, reasonable compromises we all make. […]

Sanity will always be and has always been in the eye of the beholder. And to see you here today and the kind of people that you are has restored mine.

AMY GOODMAN: That was comedian Jon Stewart, host of The Daily Show, speaking to hundreds of thousands of people Saturday at his Rally to Restore Sanity and/or Fear. We’ll have more from the rally after break. Stay with us.

AMY GOODMAN: “The Next Movement” by The Roots, here on Democracy Now!, democracynow.org, The War and Peace Report. They performed at the rally in Washington.

SAM WATERSTON: Look around at these people. How safe do you feel? Your car, when you parked, did you lock it? Thinking reasonably now, what are the odds that nobody here’s a pickpocket? That guy who just coughed down your neck, could he have an infection? The restaurant where you went to brunch, did it fail its health inspection? A madman could set loose a virus for which there isn’t a cure. And while these things may be unlikely, ask yourself, are you sure? And can you be sure that you won’t get Ebola from a tainted diet cola, toxic waste or getting chased by a bearded ayatollah.

AMY GOODMAN: The actor Sam Waterston of Law and Order, reading a poem by Stephen Colbert that he said he had written the previous day, called “Are You Sure?”

STEPHEN COLBERT: Our first fear medal goes to those news organizations who barred their employees from attending Jon’s rally, because they thought it might make them look biased: ABC, CBS, the AP, the New York Times, and especially National Public Radio. Congratulations. Oh, no! Oh, no! Not NPR! If their employees attend Jon’s rally, someone might think that NPR is liberal!

AMY GOODMAN: Jon Stewart, meanwhile, gave a medal of reasonableness to Jacob Isom, a twenty-three-year-old Texan skateboarder who shot to fame after helping stop a planned public burning of the Quran in Amarillo City Park in September. A local news video about the video and a subsequent remixed version became an instant hit on YouTube last month.

JON STEWART: Our next honoree reacted quickly when he found himself face-to-face with a flammable situation.

JACOB ISOM: Snuck up behind him and took his Quran. He said something about burning the Quran. I was like, “Dude, you have no Quran,” and ran off.

JON STEWART: I like that. Can we hear that again, maybe with a dance remix?

JON STEWART: Thank you, YouTube. Now, obviously I don’t normally condone ripping things out of people’s hands, but I think in this situation it was the most reasonable thing to do. Ladies and gentleman, our final awardee, Jacob Isom. Sir? Come on up, brother. Oh, there you go.

STEPHEN COLBERT: Boo-ya! Dude, you have no medal! How’s that feel?

AMY GOODMAN: The Rally to Restore Sanity and/or Fear also touched more directly on the growing Islamophobia around the country. This is a snippet of an exchange between Jon Stewart and Stephen Colbert, featuring surprise guest, former basketball star Kareem Abdul-Jabbar.

STEPHEN COLBERT: What about Muslims?

JON STEWART: What? What about them?

STEPHEN COLBERT: They attacked us.

JON STEWART: Stephen, “they” did not. Some people who happen to be of Muslim faith attacked us. But there are 1.5 billion Muslims in the world. Most of them —

STEPHEN COLBERT: Did not, is what you’re saying?

JON STEWART: That is correct.

STEPHEN COLBERT: He is a specific bad Muslim person.

JON STEWART: Yeah, but that’s not — there are plenty of Muslim people that are not bad and that you would like, and that’s fine.

STEPHEN COLBERT: Oh, really? Who? Who would I like?

JON STEWART: That is someone that you would —

KAREEM ABDUL-JABBAR: Well, we’re acquaintances. You know, a real friend understands that no matter what religious position someone plays, we’re all on the same team. 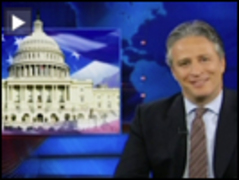