Hundreds of thousands of people marched through the streets of Washington, DC on Sunday to call for immigration reform. Estimates of the crowd size ranged from 200,000 to 500,000. Illinois Congressman Luis Gutierrez, the chairman of the Congressional Hispanic Caucus Immigration Task Force, emphasized the urgent need for Washington to act on comprehensive immigration reform. [includes rush transcript]

We end with a look at the largest rally of the Obama presidency. On Sunday, tens of thousands of people, hundreds of thousands, marched through the streets of Washington, DC for immigration reform. Estimates ranged from 200,000 to 500,000.

We stand here at the front door of American history. Tens of thousands of immigrants are filling America’s front yard — the very same place where the overlooked and the dispossessed have always traveled to seek redress for their claims. The question is, what history will we make at this spot today?


At one end of America’s front yard, behind all of you, sits Abraham Lincoln, the great emancipator. In 1863, with one signature, he turned hope into victory for millions of African American slaves. Injustice and cruelty was attacked and defeated by a courageous man with this weapon — a pen — because when Abraham Lincoln moved this pen across the Emancipation Proclamation, he also moved African Americans out of the desperate shadows of slavery and into the bright sunlight of freedom.


REP. LUIS GUTIERREZ: I like those words. We will repeat them again and again, until we turn our hope into victory and we are heard.


After Dr. King said “justice now,” in that building back there, Congress passed the Civil Rights Act, and President Lyndon Johnson made equality a reality for African Americans. How did he do it? He did it with a pen, a simple pen. Abraham Lincoln had a pen. Lyndon Johnson had a pen. My friend Barack Obama has a pen. Barack Obama’s pen can turn our hope into victory. And we want Barack Obama to use his pen. We want him to use it now!


Our friends, our families, our neighbors have waited too long. If America has a problem it can’t solve, our enemies blame immigrants. Lost your job? Blame immigrants. Costly healthcare? It’s those immigrants. But you know what? I say the blame game is over, for today we’ve come to the front door of American history to say that the wait is over, the time is now, we’re ready to turn our hope into victory. Let’s bring about comprehensive immigration reform.


So today I want to leave you with this message. We’ve been patient long enough. We’ve listened quietly. We’ve asked politely. We’ve turned the other cheek so many times our heads are spinning. Here in this place where Americans facing injustice travel to have justice delivered, we need to present our demands. What is it that we want?

To me, it’s simple. It’s time to let immigrants come out of the shadows into the light of day and for America to embrace them and protect them once and for all.

Illinois Congress member Luis Gutierrez speaking at the rally for immigrants’ rights in Washington, DC. Hundreds of thousands of people came out. Congressman Gutierrez is the chair of the Congressional Hispanic Caucus Immigration Task Force, emphasizing the urgent need for Washington to act on comprehensive immigration reform. 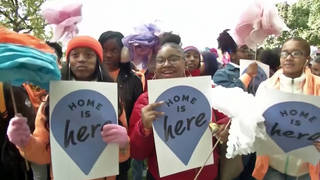