47 Years Ago in Detroit: Rev. Martin Luther King, Jr. Delivers First “I Have a Dream” Speech

We turn now to another historic march down Woodward Avenue in Detroit. It was June 23rd, 1963, when the Rev. Dr. Martin Luther King, Jr. led a civil rights march of thousands and delivered a speech with what would become his most famous words: “I have a dream.” The speech came two months before the historic March on Washington. We play an excerpt of the speech and talk to Grace Lee Boggs, who helped organize the march. [includes rush transcript]

AMY GOODMAN: We’re broadcasting on the road here in Detroit, as we turn now to another historic march down Woodward Avenue in Detroit. It was June 23rd, 1963, forty-seven years ago today, when the Reverend Dr. Martin Luther King, Jr. led a civil rights march of thousands and delivered a speech with what would become his most famous words: “I have a dream.”

AMY GOODMAN: The Reverend Dr. Martin Luther King, Jr., speaking June 23rd, 1963, forty-seven years ago today. That’s right, you heard him correctly. He was not speaking at the March on Washington; it was here in the Motor City where he first proclaimed those words, “I have a dream.”


Legendary Detroit organizer, philosopher Grace Lee Boggs helped organize Dr. King’s 1963 march, called the Grand March, down Detroit’s Woodward Avenue. We visited Grace Lee Boggs at her home, where she’s lived for more than half-a-century, and I asked her about when King came to Detroit.


AMY GOODMAN: Were you here in 1963 when Martin Luther King came?


GRACE LEE BOGGS: Yes, I was in the Freedom March. I remember it was very interesting. He came — as a matter of fact, I helped organize the Freedom March down Woodward Avenue. It was on Saturday, June 23rd. And then we had Walter Reuther, Martin Luther King. They were all —-


GRACE LEE BOGGS: Yeah, the UAW. They were all on the front line of the march. I didn’t have much use for Martin Luther King at that time, because I was really much more enamored of Malcolm. And it’s only, I think, after King went to Chicago and got some sense of what happened, what was happening, with young people in the Northern ghettos that he began to change, and I became very fond of him. I mean, learned so much from him.


AMY GOODMAN: So he gave his first “I Have a Dream” speech here.


GRACE LEE BOGGS: Yeah, but he also, in 1954, gave a speech at the Second Baptist Church downtown, where he said many of the things about transformational values that he said later on in 1967 in his anti-Vietnam War speech. It’s very interesting to watch his development.

AMY GOODMAN: Legendary Detroit organizer, philosopher, Grace Lee Boggs. We spoke with her at her home on Monday night here in Detroit. Grace turns ninety-five years old this week. Her birthday will be celebrated here at the US Social Forum. Vince Harding will be there. Danny Glover will be there. She’s also being a part of a number of the sessions here, where more than 10,000, 15,000 people have gathered to deal with war abroad and at home and to talk about alternatives.

Adrienne Maree Brown on the US Social Forum, Detroit and Octavia Butler

NEXTAdrienne Maree Brown on the US Social Forum, Detroit and Octavia Butler 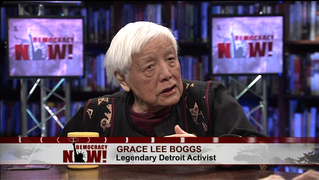