Two days after Shirley Sherrod was fired from her job at the Agriculture Department over allegedly racist comments she made in a selectively excerpted internet video posted by Tea Party activist Andrew Breitbart, Sherrod has received an apology from both the White House and Agriculture Secretary Tom Vilsack. Sherrod used to oversee rural development in Georgia, and Vilsack offered her another unspecified position within the department. Sherrod said she would consider it. We speak with the Rev. Jesse Jackson, who suggests Sherrod accept the new position: “She would be a great face of redemption on our quest for racial and gender justice and quality.” [includes rush transcript]

AMY GOODMAN: We begin today with the story of Shirley Sherrod. Two days after the Agriculture Department fired her from her job over allegedly racist comments she made in a selectively excerpted internet video posted by Tea Party activist Andrew Breitbart, Sherrod has received an apology from both the White House and Agriculture Secretary Tom Vilsack. Sherrod used to oversee rural development in Georgia, and Vilsack offered her another unspecified position within the department. Sherrod said she would consider it.


TOM VILSACK: In the conversation, I started off by extending to her my personal and profound apologies for the pain and discomfort that has been caused to her and to her family over the course of the last several days. I wanted to give her the opportunity to express what I’m sure has been an extraordinary range of emotions that she must have had, and still probably does have. But she was extraordinarily gracious. I wanted to make sure that she understood that I regretted the circumstances and that I accepted full responsibility for them.

AMY GOODMAN: The controversy began when conservative activist and blogger Andrew Breitbart posted to his website a decontextualized excerpt from a forty-five-minute speech Sherrod gave at an NAACP event in March. In the snippet on Breitbart’s website, Sherrod is seen admitting to having been reluctant to help a white farmer who sought her help twenty-four years ago, when she was working for a nonprofit agency established to help black farmers. The clip did not show Sherrod’s larger point, which was the exact opposite: moving beyond categories of race to a more comprehensive understanding of poverty.


But based on the clip on Breitbart’s website, Sherrod was fired from her USDA post, denounced by the Obama administration and even the NAACP. Sherrod defended her statements on CNN, and the white farmer, Roger Spooner, and his family backed her up. The NAACP, meanwhile, realized it had been, quote, “snookered” by Fox News and released a video of her full speech Tuesday, revealing the full extent of the deception.


Here is a longer excerpt from Sherrod’s March 27th speech, which she began by noting that her father had been murdered forty-five years ago by a white farmer, when she was just a young girl.


So, I didn’t give him the full force of what I could do. I did enough, so that when he — I assumed the Department of Agriculture had sent him to me, either that or the Georgia Department of Agriculture, and he needed to go back and report that I did try to help him. So I took him to a white lawyer that we had — that had attended some of the training that we had provided, because Chapter 12 bankruptcy had just been enacted for the family farmer. So I figured if I take him to one of them, that his own kind would take care of him.


That’s when it was revealed to me that, y’all, it’s about poor versus those who have, and not so much about white — it is about white and black, but it’s not — you know, it opened my eyes, because I took him to one of his own, and I put him in his hand and said, “OK, I’ve done my job,” and then, about seven days before that land would have been sold at the courthouse steps, the farmer called me and said the lawyer wasn’t doing anything. And that’s when I spent time there in my office calling everybody I could think of to try to see — help me find a lawyer who would handle this. And finally, I remembered that I had gone to see one just forty miles away in Americus with a black farmer. Working with him made me see that it’s really about those who have versus those who don’t. You know. And they could be black, they could be white, they could be Hispanic. And it made me realize then that I needed to work to help poor people, those who don’t have access the way others have.

AMY GOODMAN: That was Shirley Sherrod, making a much larger point than she was accused of.


Well, for more on how the Obama administration has handled Shirley Sherrod, I’m joined now from Chicago by the Reverend Jesse Jackson of the Rainbow/PUSH Coalition. He is also a friend of Sherrod’s.


Welcome to Democracy Now!, Reverend Jackson. So you have on Monday —-


AMY GOODMAN: —- Shirley Sherrod driving in her car. She’s being harassed, I guess you could say, by a top official in the Department of Agriculture, telling her to pull over, texting her, saying they wanted her to text her resignation. Finally she does this. But then, unlike other situations in the past, Shirley Sherrod started to speak out. You know Shirley Sherrod as a civil rights activist from a family of civil rights activists. Tell us about her and about what happened to her with President Obama and the Agriculture Department.


REV. JESSE JACKSON: Well, you see the classic case of an innocent person. Unearned suffering is redemptive. That’s why she is so compelling to the nation, because of her story. Her husband, Charles Sherrod, was one of the co-founders of the Student Nonviolent Coordinating Committee, along with Julian Bond and John Lewis and James Bevel and that generation of freedom fighters. And, of course, her and Charles were married. In the intervening season, her father was killed. I mean, she is an authentic freedom fighter.


And what she was sharing was her growth. We’ve learned to survive apart and now must live together. She was describing her process of growth. And, of course, we saw the blogger use a kind of intentional character assassination to make a rather limited, but painful, political point. And one of the stories we learned from this is just how toxic bloggers and cable can be when they are not held to a higher standard of professional journalism and accepted as such.


AMY GOODMAN: Reverend Jackson, the rush to judgment here. I mean, you had Andrew Breitbart posting this edited video clip. I mean, it’s not as if we hadn’t seen this before, the same person doing that video that took down ACORN, which has now been fully exonerated. This — not only the Obama administration and the Department of Agriculture, in fact the NAACP, which is now extremely sorry, Ben Jealous expressing regret over having rushed to judgment and saying what she had said was shameful. Talk about the right wing and the — what seems like the Obama administration’s extremely nervous reaction. Shirley Sherrod said that when she had to pull over on the side of the road in Georgia, when she was being told to resign, that the main reason, she was told, was that she would be on Glenn Beck that night.


REV. JESSE JACKSON: You know, we saw some of this in the character assassination of [inaudible] and Van Jones and ACORN. This idea of using the media to racially target people to make a political point really is a kind of new low. And the White House, of course, is wrong in overreacting and not affording her due process. As she stopped on the highway, she was feeling the pain of character assassination. She was being disrupted and discredited and destroyed. But she had the will, because she is a freedom fighter fighting back. And once America saw her story, America turned in a very different direction.


And I think beyond her story is the Spooner story, for here you have a case where black and white found common ground. That’s why I said that at some point here that President Obama invite the Sherrod family and Spooner family to the White House, because they represent, to me, an even more compelling story than the Gates-Crowley dialogue that took place some months back. It shows people are working to overcome. And the White House — it raises the next question that now, because race remains such a hypersensitive issue, we must now look at the broader picture. Today, we are facing unenforced and unfunded civil rights law. So while we have the joy of President Barack Obama and these athletic heroes on the field, the reality is blacks are number one in infant mortality, number one in short life expectancy, number one in poverty, lack of blacks in the Capitol, industry, technology and deal flow. Blacks are about three times the national average in unemployment. It’s a great moment not just to dialogue about the racial disparity, but a chance to invest and do something about it.


AMY GOODMAN: Would you — if Shirley Sherrod was asking your opinion on whether she should now take this new job at the Department of Agriculture, would you advise that she should?


REV. JESSE JACKSON: Well, I would advise that she take the job, because I think she can use this moment to be an even higher level of educator. It’s not unusual for us to have picketed theaters one day and then, a few months later, be an employee at that theater. To march for the right to vote and be bloodied, that doesn’t mean you don’t vote. You turn that moment of pain into a moment of power. And so, she would be a most credible source to deal with — I talked with Secretary Vilsack yesterday, and he was trying to describe what this position might look like, some kind of outreach, some connection between farmers in the rural area, black and white and brown. She has credibility on all sides. She would be an excellent government representative in this agricultural area. And the Department, itself, of Agriculture has such a long history of racial oppression. And that’s why you have these huge lawsuits, including the black farmers, now facing it. So I think she would be a great face of redemption on our quest for racial and gender justice and equality.


AMY GOODMAN: Reverend Jesse Jackson, I want to thank you very much for joining us from Chicago, the Rainbow/PUSH Coalition. 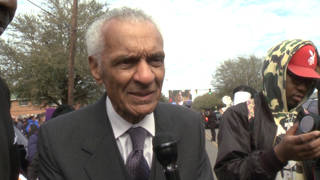