Scores of people were arrested in Oakland, California, Thursday night in protests over the verdict in the Oscar Grant shooting. Grant was the unarmed twenty-two-year-old African American man who was shot dead by Johannes Mehserle, a white transit officer, on an Oakland train platform on New Year’s Day 2009. A jury in Los Angeles convicted Mehserle of involuntary manslaughter, but he was acquitted on the more serious charges of second-degree murder and voluntary manslaughter. [includes rush transcript]

JUAN GONZALEZ: We go now to Oakland, California, where scores of people were arrested last night in protests over the verdict in the the Oscar Grant shooting. Grant was the unarmed twenty-two-year-old African American man who was shot dead by a white transit officer on an Oakland train platform on New Year’s Day 2009. Cell phone videos of the shooting show the transit officer Johannes Mehserle pulling out a gun and shooting Grant in the back while he was laying face down on the ground on the train platform.


On Thursday, a jury in Los Angeles convicted Mehserle of involuntary manslaughter, but he was acquitted on the more serious charges of second-degree murder and voluntary manslaughter. The jury included eight women and four men. No African Americans served on the jury. Mehserle will be sentenced on August 6th. Involuntary manslaughter carries a penalty of two to four years in prison, but a sentencing enhancement for using a gun means he could face an additional three to ten years behind bars.


WANDA JOHNSON: That the system has let us down, but God will never, ever let us down. Though the system has failed us, though we fight continually, but you know what? One thing I know, that the race is not given to the swift nor to the strong, but to the one who endures 'til the end. And as a family and as a nation of African-American people, we will continue to fight for our equal rights in this society. The Scripture tells us that the rich bribe the judges, and certainly we have seen the judges be bribed. Certainly we have seen how this judicial system has worked on such a case as this. We couldn't even get six hours of deliberation. And we have a new juror who came in who had not even probably reviewed the evidence with the other jurors. But the jury had already had their minds tainted.

AMY GOODMAN: Wanda Johnson, the mother of Oscar Grant. The family’s attorney, John Burris, also spoke to the media after the verdict.


JOHN BURRIS: Now, of course, we feel that the involuntary manslaughter conviction is better than no conviction at all. We do recognize and appreciate that there are — there probably is some historical significance, that I, in my long history being involved in police matters since 1979 and well over thirty homicides involving the police, I’ve never had a case where an officer was convicted of any crime against an African American male. So, in that sense, it’s a small victory. But it does not, in and of itself, fairly and accurately represent that the system works. But it cannot work in a situation where a person is killed with his hands behind his back, with an officer over him, claiming that he has seen something, and that becomes an involuntary manslaughter.


John Hamilton was in Oakland yesterday and filed this report.


JOHN HAMILTON: The streets and highways leading out of Oakland were packed with cars early Thursday afternoon, as jurors announced a verdict in the Johannes Mehserle murder trial was imminent. By 4:00 p.m. when the jury rendered its verdict, much of downtown Oakland appeared to be a boarded-up ghost town. At the Alameda County Courthouse, District Attorney Nancy O’Malley said she was disappointed, but that the verdict was a partial success.


NANCY O’MALLEY: The jury also found true that Johannes Mehserle used his gun. And that finding, itself, indicates to us that the jury completely rejected Mehserle’s claim that he had actually been grabbing his taser. As you’re well aware, that we believe that Johannes Mehserle was guilty of the crime of murder. We presented the case that way. We presented the evidence that way. And the jury found otherwise.


PROTESTER: I’m afraid. I’m scared. This is just another reminder in my life, in my twenty-nine years on this earth, that my worth to this society is not that much. I’m saddened for the family of Oscar Grant and other families who have witnessed or been a part of or victimized by certain and similar violence to Oscar Grant, because he’s not the only one, and unfortunately, this happens in a lot of different circumstances.


G. WAYNE: I think we kind of expected that something like this would happen, because there’s a long history of police abusing minorities of people that don’t have much money, put it frankly, and then getting slapped on the wrist. So, when the trial got moved to LA, we kind of figured something was going to happen that would be more lenient than a typical murder charge.


ZUMBI: And to hear involuntary manslaughter, it’s a slap — to me, it’s a slap in the face to specifically African American men in this country, but also humanity in general. Michael Vick did two years for a dog being killed on his property. Johannes Mehserle is going to do two to four years for murdering a man execution-style. There’s something wrong with the picture in my frame of reference.


JOHN HAMILTON: Much of Johannes Mehserle’s defense centered on the contention that the former transit officer thought he was drawing a taser weapon rather than a firearm when he shot and killed Oscar Grant. Oakland City Councilwoman Rebecca Kaplan.


COUNCILWOMAN REBECCA KAPLAN: Well, this horrible crime and horrible tragic loss of life occurred in part because people policing BART were carrying both tasers and guns. And guns, in that kind of small, enclosed environment that you have in a BART car, are very dangerous. And I think it’s worth asking the question, whether they really should be carrying guns or not.


JOHN HAMILTON: What made Thursday’s verdict of involuntary manslaughter so hard to swallow for many Oakland residents were the multiple video cameras that recorded Oscar Grant’s killing. West Oakland community activist and artist, Cat Brooks.


CAT BROOKS: I cannot reconcile what I saw on the video with the verdict today. How many angles do you need to look at that tape to understand that that was murder? There had to be at least a thousand people out here tonight. They’re in Los Angeles mobilizing tonight. We all know it’s murder. Across the country, we know it’s murder. You know, but it’s nothing new in America. Black and brown babies have been being killed by law enforcement for hundreds of years. Before law enforcement, it was slaveowners. It’s the history of this country. What the miracle of this was, is that finally, for the first time, a police officer was put on trial for murdering an unarmed civilian. The tragedy of it is, is that black and brown people were told yet one more time that their lives mean nothing in this country.


JOHN HAMILTON: As hundreds filed out of downtown Oakland, many others remained, shadowed by an increasing number of riot police.


ZUMBI: I would like people to express themselves, but try to be peaceful about it. I don’t think it helps us to break windows of small business owners in downtown Oakland. I know everybody is mad, and a lot of people feel like it was not the right punishment, but we have to come together as a community on a regular basis, not just when something bad happens, not just when it’s a tragedy.


POLICE OFFICER: …Including the use of force, which could result in serious injury. Section 409 of the penal code prohibits remaining present at an unlawful assembly. If you remain in the area just described, regardless of your purpose, you will be in violation of Section 409.


JOHN HAMILTON: At least one woman was injured when a police car backed into her. Dozens of downtown businesses had their windows smashed. A few suffered looting. Police made scores of arrests with an exact number yet unknown.


PROTESTER: We’ve been pushed back as far as we can go. You have some people back there who have been barricaded and trapped in, and they’re attempting to get us to leave. They’re pushing us all. And they don’t want us here, because we’re speaking truth.


PROTESTERS: No justice, no peace!

AMY GOODMAN: Again, the transit officer Johannes Mehserle faces two to four years in prison. But a sentencing enhancement for using a gun means Mehserle could face an additional three to ten years behind bars. He’ll be sentenced on August 6th. 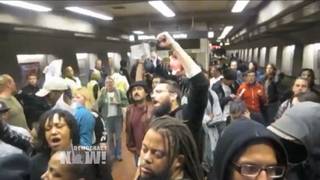