American “vulture” investors, including a top funder of the Republican Party, have demanded that African nations pay over half a billion dollars for old debts, for which the investors paid only a few million. One New York vulture speculator, Peter Grossman of FG Capital Management, is demanding $100 million from the Democratic Republic of Congo. Is he collecting a legitimate debt from the Congo, or is the vulture’s claim based on a stolen security? Greg Palast reports from the Congo, Bosnia and New York in a joint investigation by the BBC, The Guardian and Democracy Now! [includes rush transcript]

AMY GOODMAN: American so-called “vulture investors,” including a top funder of the Republican Party, have demanded African nations pay over half a billion dollars for old debts, for which the investors paid only a few million. These so-called vulture investors attack desperately poor nations. That’s outlawed throughout most of the world, but not in the United States.

Democracy Now! has joined an investigation begun by The Guardian and BBC Television targeting one New York vulture speculator who’s attacked the Democratic Republic of Congo, demanding $100 million. Is he collecting a legitimate debt from Congo, or is the vulture claims based on a stolen security, criminally transferred to an American financier known after the James Bond film as “Goldfinger”? Greg Palast reports from the Congo, Bosnia and New York.

I tracked down an elusive American speculator to his New York lair. He’s been awarded $100 million against one of Africa’s most poverty-ravished nations, for a debt he bought for just $3.3 million, under very mysterious circumstances.

PETER GROSSMAN: And I’m not beating up the Congo. I’m collecting on a legitimate claim.

While the rest of the world wrote off the debts of Congo and other poor nations to make poverty history, Peter Grossman and his fellow vulture financiers saw a chance to profiteer from the public’s generosity. Their scheme is to get rich quick by buying up worthless African debt, then suing for 10 or 100 times what they paid for it.

Do you think it’s fair that your vulture fund has sought $100 million from the Congo?

PETER GROSSMAN: Yeah, I do, actually.

GREG PALAST: You do?

PETER GROSSMAN: Can I ask—can I ask you—

GREG PALAST: For a debt that you paid only $3 million for?

GREG PALAST: Our investigation began in the Congo, suffering from an epidemic of cholera.

I’m heading out of the capital, Kinshasa. The cholera epidemic is sweeping the country. I’m driving to an encampment where the victims are cared for and quarantined. It’s still a struggle for the people here, in a nation just now recovering from years of civil war.

CHOLERA CENTER DOCTOR: This place is what we call a cholera treatment center. It’s set up in Kinshasa, part of the town called Kingabwa.

GREG PALAST: It’s simple: what’s needed here is clean water. The question is, why don’t they have it?

Here’s what’s happened. A financial speculator, known as a vulture, has blocked the Congo receiving $100 million, which the vulture wants for himself. In this village, the British government and UNICEF dug a well. At a cost of less than $2,000, they were able to provide clean water, cholera-free water, for 400 people. That still leaves 50 million Congolese without clean water. The vulture wants $100 million. I asked the director of the UNICEF project what $100 million could do here.

GREG PALAST: Would that make you happy?

GREG PALAST: The story began 30 years ago, when Yugoslavia built power lines for the Congo. They hadn’t finished paying for the lines when both Congo and Yugoslavia slipped into civil war. One hundred thousand died as Yugoslavia split into seven separate countries, and millions died in Congo. Somehow, in all this mayhem, vulture speculators obtained the right to collect that power line debt owed by the Congo. The vultures paid just $3 million, but they’ve demanded $100 million from the devastated African nation. American vultures claim Congo owes them $100 million, but is it a debt or a crime? Was the debt, in fact, stolen property, stolen 3,000 miles away, stolen from the file cabinets of an Eastern European nation? On a tip, we flew to Bosnia.

I’ve come here, to Sarajevo, the center of another bloody conflict, to find out how the vultures got their hands on this debt. I’ve obtained information that the two key players are these men: first, an American, Michael Sheehan, and second, Bosnia’s own former prime minister, Nedzad Brankovic. The pylons for Congo were made here at the state-owned company called Energoinvest. The company once was the powerhouse of the Bosnian economy. Now police are investigating how its assets were stripped, leaving the company in ruins and thousands unemployed. Ten years ago, the state-owned company was being run by Mr. Brankovic. He became prime minister but had to quit after he was indicted for corruption. Drew Sullivan and his team at the Center for Investigative Reporting in Sarajevo are the ones that took down the prime minister.

DREW SULLIVAN: Well, this is the apartment that cost him his job as prime minister.

GREG PALAST: What happened? How did it cost him his job?

DREW SULLIVAN: Well, the government bought this apartment for $240,000 and then said it didn’t need it, and he bought it off the government for a very low price.

GREG PALAST: How much did he pay?

DREW SULLIVAN: Well, they indicted him for it.

GREG PALAST: Brankovic was indicted, but the case had to be dropped last year after all the paperwork mysteriously disappeared. But at the same time as Mr. Brankovic was buying state property on the cheap, he was also talking about the old Congo debt with a vulture. This is the man, Michael Sheehan. Familiar? He’s the first vulture we exposed back in 2007, the man who called himself, after a James Bond villain, “Goldfinger.”

Goldfinger had squeezed millions out of Zambia, and now he targeted the Congo debt. In 2001, he signed a deal with the Bosnian Brankovic’s people to see if he could get a cut. The transaction was more than suspect.

You know, time to see the cops. This is the office of the chief of the financial police.

We obtained a police report, never before made public. It says Brankovic secretly arranged to sell Goldfinger’s friends the debt for just $3 million and that this was a crime.

Was it illegal for Brankovic to sell the debt off to the vultures?

CHIEF OF FINANCIAL POLICE: [translated] Of course it is illegal. That’s why we filed a criminal complaint. This crime is abuse of power. We have identified the criminal intent, the elements of the crime, and who did it.

GREG PALAST: So, why would Brankovic do this? What’s his motive?

CHIEF OF FINANCIAL POLICE: [translated] We ask ourselves that, too.

GREG PALAST: Every crime has a motive. Did you find any evidence of a motive?

GREG PALAST: If Brankovic is convicted, can he go to jail for this crime?

CHIEF OF FINANCIAL POLICE: [translated] He must. He should go to jail.

GREG PALAST: I met with the whistleblower who tipped off the Bosnian investigators: Izet Spahic is a senior army veteran, a brigadier-general. The brigadier told us that Congo was prepared to do a deal over the debt. It would include new work for Bosnia’s’ Energoinvest, but the vulture scam killed it.

Did you speak to Mr. Brankovic about this?

BRIGADIER-GENERAL IZET SPAHIC: [translated] Yes, of course I confronted Mr. Brankovic. He created this whole situation. And he said it was all long gone, in the past. Never again should vulture funds be allowed to ruin the work of decent people on decent projects. They’re monsters. I just can’t understand why Bosnians would do deals with them.

GREG PALAST: Then night fell on the Congo. One week after Goldfinger got his hands on the debt, the president was assassinated. By that time, six other nations had invaded Congo, and millions were dead. So there was no real government of Congo and no one to argue Congo’s case when the vultures sued.

Then, the story switches from Congo to the real heart of darkness, New York City, home of FG Hemisphere.

FG attempted to grab the diplomatic buildings of the Congo, but a judge said no. They began to go after any company anywhere in the world that traded with Congo. The vultures demanded Congo’s money be handed over to them. They couldn’t sue anyone in British courts because of a new law that was brought in after we exposed their activities. But in America, courts still permit vulture claims. Congresswoman Maxine Waters has sponsored a new law to halt vulture collections, but her bill has been blocked by speculators, led by billionaire vulture Paul Singer. Singer is the number one New York donor to the Republican Party.

Singer bought some discounted debt from Congo-Brazzaville for only about $10 million. His company then sued Congo and turned the $10 million into $127 million. But that still wasn’t enough.

I’m right here, in fact, at 712 Fifth Avenue. OK. Is there any time or any place where I can meet with Mr. Singer?

We’ve tried to talk to the billionaire.

Absolutely no way ever?

If Congress doesn’t act, $100 million from the Congo will end up here at 300 DeKalb Avenue, Brooklyn, the offices of vulture fund FG Hemisphere. It appears to be a garage. I thought we should check.

Mr. Grossman, hi. Greg Palast, BBC and Guardian. Do you think it’s fair that your vulture fund has sought $100 million from the Congo?

PETER GROSSMAN: Yeah, I do, actually.

GREG PALAST: You do?

PETER GROSSMAN: Can I ask—can I ask you—

GREG PALAST: For a debt that you paid only $3 million for?

GREG PALAST: But do you know that the transfer of the debt to you was called a crime by the police? Are you familiar with that?

PETER GROSSMAN: No, I’m not.

GREG PALAST: You’re not familiar with that?

PETER GROSSMAN: And I’m not beating up the Congo. I’m collecting on a legitimate claim.

GREG PALAST: You’re collecting on a legitimate claim. So that—in other words, you hundred—the $100 million goes better to you than UNICEF, which says that it could use that $100 million to save 200,000 lives.

PETER GROSSMAN: But you don’t know the money was going to go there. Mr. Palast, let me ask you a favor.

PETER GROSSMAN: This kind of guerrilla journalism doesn’t work for me.

GREG PALAST: Back in the Congo, school kids are waiting for their school to get clean water, maybe even desks or chairs.

This is Greg Palast in the Congo for BBC and The Guardian and Democracy Now!

AMY GOODMAN: Greg Palast is an investigative reporter with the BBC. His new book is called Vultures’ Picnic: In Pursuit of Petroleum Pigs, Power Pirates, and High-Finance Carnivores. 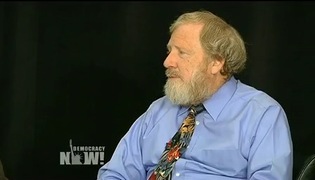