Photojournalist and filmmaker Tim Hetherington, director and producer of the documentary film “Restrepo,” and photojournalist Chris Hondros were killed in the Libyan city of Misurata on Wednesday when a group of four photojournalists were attacked.

Democracy Now! interviewed Hondros April 5, 2007, about the graphic photographs he took in the northwestern Iraqi city of Tal Afar in 2005 when U.S. troops opened fire on a family of eight approaching a checkpoint in a car. Both parents were killed while the six children in the backseat looked on. His photos were nominated for a Pulitzer Prize.

Click here to read the complete transcript of this interview. An excerpt is listed below.

AMY GOODMAN: Chris is a staff photographer for the international photo agency Getty Images. He’s just returned from his ninth stint in Iraq, which he chronicled at his blog, gettyimages.com, joining us in our firehouse studio.

Chris, you are well known for this remarkable series of photographs in Tal Afar. Can you explain what happened?

CHRIS HONDROS: Yes. It was a couple of years ago now. It was in January 2005, and I was embedded with US Army troops in Tal Afar in northern Iraq. I’d been sent there by the Army. I had wanted to go to Mosul, where there were some battles going on at the time, but I’d been sort of waylaid to go to Tal Afar, because you don’t always get the embeds that you want in Iraq. And I was with a group of soldiers on a routine evening patrol around dusk, about 6:00 or so, right around the time where the curfew was held in Tal Afar, and a car on the darkened streets sort of appeared in the distance and started coming down the boulevard toward the soldiers. As is well known, you know, the soldiers don’t like cars coming towards them. They fear suicide bombers and things. They weren’t sure what to do. They fired a few shots. The car kept coming, and so they shot up the car. And tragically, an Iraqi family was in the car, parents and six children, and the parents were killed instantly. And I documented that event.

AMY GOODMAN: And then the children that came out of this car. 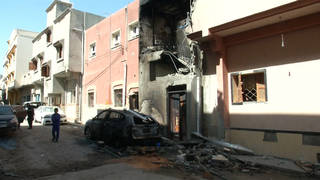