A new exposé on Haiti reveals how the United States led a vast international campaign to prevent former Haitian President Jean-Bertrand Aristide from returning to his country while he was exiled in South Africa. It’s part of a series of reports by The Nation magazine and the Haitian weekly Haïti Liberté that draw from almost 2,000 U.S. diplomatic cables on Haiti released by WikiLeaks. The cables show that high-level U.S. and U.N. officials coordinated a politically motivated prosecution of Aristide to prevent him from “gaining more traction with the Haitian population and returning to Haiti.” The United States and its allies allegedly poured tens of millions of dollars into unsuccessful efforts to slander Aristide as a drug trafficker, human rights violator, and heretical practitioner of voodoo. Another recent exposé based on the cables details how Haiti’s unelected de facto authorities worked alongside foreign officials to integrate at least 400 ex-army paramilitaries into the country’s police force throughout 2004 and 2005. The WikiLeaks cables reveal just how closely Washington and the United Nations oversaw the formation of Haiti’s new police force and signed off on the integration of paramilitaries who had previously targeted Haiti’s poor majority and democratically elected governments. We speak to Haïti Liberté editor Kim Ives, whose latest article for TheNation.com is “WikiLeaks Haiti: The Aristide Files.” [includes rush transcript]

AMY GOODMAN: A new exposé on Haiti reveals how the United States led a vast international campaign to prevent former Haitian President Jean-Bertrand Aristide from returning to Haiti while he was exiled in South Africa. It’s part of a series of reports that draw from almost 2,000 U.S. diplomatic cables on Haiti released by WikiLeaks. The series is a partnership between The Nation magazine and the Haitian weekly newspaper Haïti Liberté. The cables cover an almost seven-year period, from April 2003 to February 2010, just after the earthquake that devastated Haiti.

The cables show high-level U.S. and U.N. officials coordinated a politically motivated prosecution of Aristide to prevent him from, quote, “gaining more traction with the Haitian population and returning to Haiti.” They reveal how U.S. officials and their diplomatic counterparts from France, Canada, the U.N. and the Vatican tried to vilify and ostracize the popular Haitian political leader, president, voted in twice. These officials allegedly poured tens of millions of dollars into unsuccessful efforts to paint Aristide as a drug trafficker, a human rights violator, a heretical practitioner of voodoo.

Another recent exposé based on the cables details how Haiti’s unelected de facto authorities worked alongside foreign officials to integrate at least 400 ex-army paramilitaries into the country’s police force throughout 2004 and '05. According to the report, hundreds of police considered loyal to Aristide's deposed government were purged. Some were jailed. A few were killed. The WikiLeaks cables reveal just how closely Washington and the U.N. oversaw the formation of Haiti’s new police force and signed off on the integration of paramilitaries who had previously targeted Haiti’s working classes and democratically elected governments.

We’re joined now by one of the authors of the report, Haïti Liberté editor Kim Ives. His latest article for TheNation.com is called, “WikiLeaks Haiti: The Aristide Files”

Kim Ives, welcome to Democracy Now! What were you most shocked by? I mean, you have been covering Haiti now for decades. What was most revealed to you in these State Department diplomatic cables released by WikiLeaks?

KIM IVES: I could say it’s the detail, the micromanaging that Washington employs in dealing with this. They really go and psychoanalyze, go in and sit down. And this is on a worldwide scale. A lot of these documents in, for instance, the Aristide piece, we were drawing—myself and Ansel Herz, who did it, and I should say Dan Coughlin played a major role in putting together The Nation version—we found that they were doing this across the planet. You had the Dominican Republic, France, the Vatican. They were all looking at how to block Aristide, keep him out.

AMY GOODMAN: Give us specific examples that you found in the documents.

KIM IVES: Well, the Vatican, for instance. Here, they said they had no regrets about Aristide being removed. They said, “The priest had to go.” When he was out, and there was, after the earthquake, talk of bringing him back, they said, “This would be a disaster. It would be destabilizing.” It was very interesting, too, how they were seeing it as similar to Cuba. And they said, “Cuba is a much harder problem, because that’s a system there. In the case of Haiti, it’s just Aristide. It’s an individual. We can get him out easily.” So, they’re openly talking among themselves on this worldwide basis about how to block this guy.

AMY GOODMAN: What was revealed about the U.S.’s role?

KIM IVES: Well, the U.S. is, again, ringleader. This is really the—you can see, especially, for instance, in this week, Jeb Sprague did a piece on the paramilitaries that you mentioned. Here you see the U.S. really passing the commands down the chain to the prime minister, to the different ministers in the de facto government, telling them how they’re going to integrate it. They have to “hew to our redlines,” that was one of the quotes from James Foley, the ambassador at the time.

KIM IVES: Yeah, mm-hmm. They have to “hew to our redlines” in putting together the police force, integrating these coup-making ex-soldiers into the police force. I mean, here are people who carried out a coup, and you’re putting them in charge of the state.

AMY GOODMAN: In March, Democracy Now! covered ousted Haitian president Jean-Bertrand Aristide when he returned to Haiti from South Africa. He was exiled for seven-and-a-half years. When he landed in Port-au-Prince, he was greeted by thousands of supporters. He addressed the crowd in a number of languages. When he spoke English, he said, “Exclusion is the problem, inclusion is the solution,” not directly referencing his party, Fanmi Lavalas, which was excluded from the election. But when he addressed the Haitians in Creole, in their language, he was much more explicit.

AMY GOODMAN: This was President Aristide when he returned in March to Haiti after seven-and-a-half years, talking about the exclusion of the largest party in Haiti, of Fanmi Lavalas, from the elections.

KIM IVES: Mm-hmm, yes. We see them excluded. We see—essentially, Janet Sanderson came, in a 2008 cable, and she said—

KIM IVES: Janet Sanderson is the—was the ambassador of Haiti at the time. And she was pointing to the importance of keeping the occupation there, to keep Haiti locked down. She said, “The MINUSTAH is key to the core interests of the U.S.”

AMY GOODMAN: And the MINUSTAH is?

KIM IVES: The MINUSTAH is the U.N. mission to stabilize Haiti. This is what the now 13,000 troops that are deployed in Haiti, the only occupied nation in Latin America, which was the first independent nation of Latin America—you see they say this U.N. occupation is key to the core interests of the U.S. in Haiti, and that we have to keep it. It’s a way—if we removed it—and this is coming up. That’s why Haitians were out demonstrating this past week out in front of the U.N. If we removed it, it could make Haiti vulnerable to the anti-market forces that are on the ground in Haiti.

AMY GOODMAN: August 2nd, 2006, top U.S. and U.N. officials, “Aristide movement must be stopped.” Explain whose title is that?

KIM IVES: That’s James Foley at the time. He was Sanderson’s predecessor. And—

KIM IVES: Yeah, and he was talking with Edmond Mulet, who was a Guatemalan diplomat who headed the MINUSTAH at the time. And in fact, Mulet was saying to them, “We have to prosecute Aristide to keep him from getting traction with the people. We have to go after him.” And in fact, Haïti Liberté has learned that there is in fact a U.S. team working to try to put together some kind of prosecution against Aristide. They’ve been trying to pin something on him for years—drugs, corruption, human rights. They can’t do it. As his lawyer said, “They’ve come up with nothing, because there is nothing.”

AMY GOODMAN: U.S. Ambassador Hertell, November 16, 2006, “Aristide had led a violent gang involved in narcotics trafficking and had squandered any credibility he formerly may have had.”

KIM IVES: This was an extraordinary scene, where Fernández, the president of the Dominican Republic next door, had suggested at a meeting, a hemispheric meeting, that Aristide be brought into the process. He was admonished—admonished—by an ambassador, admonishing a president, in a pull-aside at the thing, where Hertell came with those words to Fernández, who said, “I haven’t heard anything about that.”

AMY GOODMAN: March 5th, 2004, U.S. Ambassador to the Vatican James Nicholson wrote a cable reporting that the Holy See’s Deputy Foreign Minister had “no regret at Aristide’s departure, noting [that] the former priest had been an active proponent of voodoo.”

KIM IVES: Of voodoo, yes. Well, we have to remember, the Vatican has a huge grudge against Aristide. He was one of their star priests. That’s how he rose to prominence as a Salesian priest, St. John Bosco in Port-au-Prince in the 1980s. He was talking about liberation theology, putting the hierarchy on the spot.

AMY GOODMAN: And very quickly—we have 10 seconds—Canadian diplomats, this is, “Even before these recent rumors, she said, Canada had a clear position in opposition to the return of Aristide.” Two Canadian diplomatic officials met with U.S. embassy personnel, saying, “We are on the same sheet” with regards to Aristide.

KIM IVES: Canada played a support role to the U.S., just as France did trying to block Aristide’s return through third countries, blocking commercial lines so he couldn’t get back. So they all played it. And we can see it. You can read it in Haïti —

AMY GOODMAN: But he’s back. 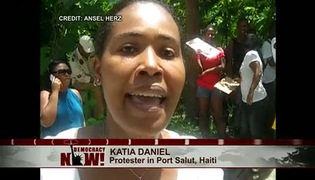