Web ExclusiveSep 29, 2011Cornel West on Occupy Wall Street: It’s the Makings of a U.S. Autumn Responding to the Arab Spring

AMY GOODMAN: Juan, before we move on with our first segment, you have an interesting column in the New York Daily News today about the Treasury Department approving huge paydays for execs from firms that actually received TARP bailout money.

JUAN GONZALEZ: Yeah, you know, I was shocked that this got very little attention earlier this week when the inspector general for the TARP program released his audit. The audit showed that as many as 49 executives at a handful of firms that received the biggest bailouts received from $5 million and up in compensation, approved by the special master that the Treasury Department appointed, Kenneth Feinberg, to review executive compensation. And we’re talking about the firms that got the largest payouts, including AIG, General Motors, the largest bailouts. And AIG was by far the worst. In fact, Feinberg told the auditors that that company represented 80 percent of his headaches over the past few years.

The most interesting part of the audit, though, I thought, was that Feinberg reported that the Treasury Department and officials at the Federal Reserve Bank of New York were regularly pressuring him to increase the pay of these bailed-out firms. Now, understand, AIG was 90 percent owned by the federal government, after receiving $180 billion in bailouts. It is still 70 percent owned by the taxpayers. And yet the CEO of AIG, Robert Benmosche, received $10.5 million in ’09, $10.5 million in ’10, and $10.5 million in 2011, including $3 million in cash every year, even though Congress and President Obama had said they were going to limit executive pay to $500,000 a year. And the one—

JUAN GONZALEZ: Yes, at one point, the CEO of Allied Financial complained that one of his executives was being reduced from a million to $500,000 a year, and he said that that executive would be made cash poor, because he had a couple of kids in private school, and he wouldn’t be able to meet his monthly bills on a salary of only $500,000 a year. And these are the kinds of abuses that have taxpayers furious. Here are people, millions of people, losing their homes, losing their jobs, and these executives, who have received federal money, bailouts, are demanding these enormous salaries—and getting them—despite the limits that were supposed to be placed by the Treasury Department on employee compensation.

AMY GOODMAN: Now, of course, Tim Geithner is Treasury Secretary, was head of the Federal Reserve in New York.

JUAN GONZALEZ: Right, and it was his assistants who were pressuring Feinberg to increase the pay, because they were warning that if these executives left the companies, that the government would not be able to get paid back its money. Of course, the audit found that 85 percent of the executives, the top executives at these companies, the top 25 at each of the companies, that was there in 2009 when the bailout started, was still there. In other words, very few of them actually left, despite the caps on pay. 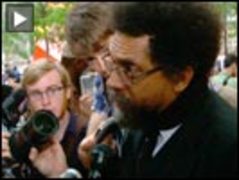