Spanish Judge Baltasar Garzón is known for ordering the arrest of Chilean dictator Augusto Pinochet and seeking to indict members of the Bush administration for their role in torturing prisoners. Now Garzón himself is facing a trial in Madrid, after right-wing groups objected to his investigation of atrocities committed by supporters of the dictator Francisco Franco. While prosecutors reportedly disagreed with the charges that Garzón had exceeded his authority, Spanish law allows civilians to lodge criminal charges. If convicted, Garzón could lose his right to sit as a judge in Spain. He appeared before Spain’s Supreme Court today. On Wednesday we will interview Reed Brody, a lawyer with Human Rights Watch who has been in the courtroom observing Garzón’s trial.

Speaking on Democracy Now! last year, Garzón said between 150,000 and 200,000 civilians disappeared during the Franco regime, which seized power during the Spanish Civil War in the 1930s.

Garzón has used the doctrine of universal jurisdiction to investigate war crimes and torture across national lines, famously indicting Osama bin Laden and other members of al-Qaeda in 2003 and attempting to indict members of the Bush administration for authorizing torture at Guantánamo Bay and overseas. In 1998, he ordered the arrest of Chilean dictator Augusto Pinochet, leading to Pinochet’s arrest in Britain. 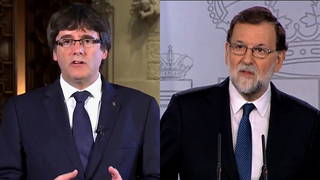