As New York City continues the recovery from Superstorm Sandy, we travel to the Brooklyn neighborhood of Red Hook, one of its hardest-hit areas. At least five feet of water flowed through most of Red Hook during the Sandy high-tide storm surge, flooding the commercial district and hundreds of apartments of people that live on the first floor or basement levels. On Wednesday, the day before the National Guard and FEMA arrived in the neighborhood, the Democracy Now! team interviewed a number of people who, hours after surviving the storm, began self-organizing relief efforts, including the Red Hook Initiative, a community organization that has teamed up with the Occupy Wall Street offshoot Occupy Sandy to provide food, water and other supplies to local residents, as well as coordinate clean-up efforts. We also speak to business owners and local residents, and visit the devastated local urban farm, Added Value. [Transcript to come. Check back soon.]

AMY GOODMAN: This is Democracy Now!, democracynow.org, The War and Peace Report. I’m Amy Goodman. We are broadcasting from St. Louis, Missouri, from Missouri Public Television, and from New York City. Over four million people have entered their fourth day without power across 12 states following the devastating Superstorm Sandy. Concern is growing for people who lack food, water and heat.

We begin today’s show in the Brooklyn neighborhood of Red Hook, one of the hardest-hit areas of the city. It’s also home to one of the largest public housing developments in the city. On Wednesday, the Democracy Now! team interviewed a number of people who survived the storm. We begin outside the Red Hook Initiative, a community organization that’s teamed up with an Occupy Wall Street offshoot called Occupy Sandy to provide food, water, batteries and other supplies to local residents.

RED HOOK RESIDENT 1: The hallways are dark. The building is dark. The whole project is dark. It’s like a war zone out here. And they have people in wheelchairs that they can’t get downstairs. Elevators are out, of course. We’re walking to the sixth floor. It’s bad out here.

RED HOOK RESIDENT 2: They just got started pumping today. But we don’t have ConEd out here. We don’t have none of that services out here. They’re not even coming.

SAMORA COLES: Well, my name is Samora Coles, and I am a former employee of the Red Hook Initiative, just recently, maybe a year-and-a-half ago. But this is still part of my home, and it’s part of my community, so I come back every now and so often to volunteer what needs to be done. So, unfortunately, due to the drastic devastation that happened a day or two ago, the people in the Red Hook community are out without food, water, lights and a lot of the basic needs. And so, what the Red Hook Initiative has done, they collaborated with a group of volunteers who are going well beyond their means to donate and to give food and clothing, fresh water.

LISA COWAN: I’m Lisa Cowan. I’m on the board of the Red Hook Initiative. I think Occupy Sandy people, who are alumni of Occupy Wall Street, sent out the word that we needed food. And so, this is sort of a combination of residents, volunteers. It’s one of the only places in the neighborhood that retained electricity during the storm, so we open our door, in part, because nobody could get any information. Nobody could plug in their phones. So we’re here for just—we opened up our plugs to the community. People started pouring in. And then volunteers showed up with food. People have been calling us, tweeting us, Facebooking us, to say what can they do. And so, what we’re trying to do is get people to drop off non-perishables, candles, flashlights, batteries. One of the biggest things we’re hearing from people who live in the houses is just how dark it is at night. And now it’s starting to get cold.

AMELIA: My name is Amelia, and I just responded to a call online through an Occupy website that they needed volunteers down here today. This is the Red Hook Initiative, so this is always open, doing community involvement things. So they’ve just let us kind of come in and use their space and serve food and collect donations from the neighborhood. So, we’ve been here since around 10:00 a.m. today. We had breakfast. We’ve had hot lunch. We have snacks all day. And then we’re going to serve hot dinner at 6:00.

MONICA BYRNE: I’m Monica Byrne. I’m one of the owners of Home/Made in Red Hook catering. This is my kitchen. And what happened Monday? Well, we had a big storm. We—actually, most of Red Hookers were staying put. Most of us were all in communication. We had organized, you know, lists online, so everybody knew who was open and who was closed, who had what resources. And we were all, a bunch of us, sitting here playing cards, listening to music, when the water started coming up Pioneer Street, slowly, but slow-fast, kind of. It wasn’t like a tidal wave. It was just slowly crawling at a rapid speed. And in about 15 minutes, it went from the end the Pioneer and Imlay by the water to our front stoop and up about a foot.

SELWYN CRICHLOW: Selwyn Crichlow, and my address is 99 Pioneer Street, Brooklyn, New York, the Red Hook area. What we experienced on Monday was the worst part of a storm. We had water that completely filled the basement. The cars were almost submerged in water. There were just debris all over the place, things—it was just chaos in the place. It was just chaos in the place. As soon as the electricity went, you see, and it was like all man to himself, you see? It’s just like man against Mother Nature. And Mother Nature won. I would not wish a storm like this on my worst enemy. It would not wish a storm like this. It just shuts life down. It just shuts life down. And it make man—actually make man realize who he really is. See? It give you time to actually think on yourself and see who you really are, you see, what purpose you really have, you see? So there’s a lot of self-searching that goes on. Even an enemy becomes friend at time like this.

CORBIN LAEDLEIN: My name is Corbin Laedlein. I’m the youth empowerment program coordinator here at Added Value, and we operate the Red Hook Community Farm, which is where we’re at now. Basically, the farm was completely flooded. It seems like at some points, judging from the marks in the greenhouse, it was up to around four feet. And so, all the crops were covered with water from the harbor. So we won’t be able to sell any—any of that anymore. I grew up in Red Hook. There are people on my block who’ve lived in Red Hook for, you know, decades and decades and have never seen anything like this. And I think—hopefully now, this is the wake-up call. I heard that—you know, I don’t have electricity, so I haven’t been listening to the news and stuff, but I heard that Governor Cuomo mentioned climate change, and so that was like a drop in the—you know, something good. But, you know, the fact that it wasn’t mentioned at all during the presidential debates is just completely ridiculous, especially when things like this are happening. I have a feeling this is going to become the new normal in a world where temperatures are rising, sea-level temperature—sea-surface temperatures are rising. So, you know, it needs to be—it needs to be an issue we’re talking about and figuring out how to address it.

MIKE BURKE: How do local farms fit into the solution?

CORBIN LAEDLEIN: Well, actually, I think many people argue that local farms are the solution. You know, our industrial agriculture—agricultural system is based on using fossil fuels for pesticides, and natural gas. We ship food all across the country. And it just doesn’t make sense. We need to localize production to reduce our carbon footprint. And there’s a group, awesome group, Via Campesina, says that, you know, small-scale farming, peasant agriculture, will cool the climate. And I think many people are catching on to that.

AMY GOODMAN: Special thanks to Mike Burke, Sam Alcoff and Jessica Lee in Red Hook this week, one of the hardest-hit areas of the city. This is Democracy Now!, democracynow.org, The War and Peace Report. When we come back, “It’s Global Warming, Stupid.” That is the cover story of Bloomberg Businessweek. We’ll be joined by its editor and author of the piece, Paul Barrett. Stay with us. 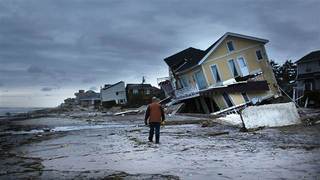