“NRA Killing Our Kids” — that was the message of CODEPINK activists as they interrupted the first public address by National Rifle Association chief Wayne LaPierre since the Sandy Hook massacre. LaPierre broke the NRA’s post-Newtown silence on Friday by calling for armed guards in every school. CODEPINK protesters disrupted him by holding up banners reading ”NRA Killing Our Kids” and ”NRA: Blood On Your Hands.” In the days leading up to its call for firearms in schools, the NRA had promised to unveil what it called “meaningful contributions” to the gun control debate. [includes rush transcript]

StoryDec 19, 2012“We Have to Do Something”: Rep. Carolyn McCarthy on the Growing Push for Gun Control After Newtown

NERMEEN SHAIKH: The National Rifle Association is coming under increasing criticism for refusing to back any form of new gun control following the mass shooting at the Sandy Hook Elementary School in Newtown, Connecticut. The NRA broke its silence on Friday when the group’s CEO, Wayne LaPierre, gave a speech in Washington calling for armed guards in every school. While repeatedly defending guns, LaPierre condemned Hollywood, video manufacturers and the nation’s media.

WAYNE LAPIERRE: And here’s another dirty little truth that the media try their best to conceal: There exists in this country, sadly, a callous, corrupt and corrupting shadow industry that sells and stows violence against its own people through vicious, violent video games with names like “Bulletstorm,” “Grand Theft Auto,” “Mortal Kombat” and “Splatterhouse.” And here’s one; it’s called “Kindergarten Killers.” It’s been online for 10 years. How come my research staff can find it, and all of yours couldn’t or didn’t want anyone to know you had found it? Add another hurricane, add another natural disaster—I mean, we have flood-soaked films out there like American Psycho, Natural Born Killers, that are aired like propaganda loops on splatter days and every single day. A thousand music videos—and you all know this—portray life as a joke, and they play murder—portray murder as a way of life. And then they all have the nerve to call it “entertainment.”

AMY GOODMAN: The speech by Wayne LaPierre, the head of the NRA, was twice interrupted by members of the protest group CODEPINK.

WAYNE LAPIERRE: And the monsters and the predators of the world know it and exploit it. That must change now. The truth is—

AMY GOODMAN: LaPierre is speaking. A sign is being held up over his face that says, ”NRA Killing Our Kids.”

AMY GOODMAN: [Wayne LaPierre] continued as the protester was taken out.

WAYNE LAPIERRE: The truth is that our society is populated by an unknown number of genuine monsters.

NERMEEN SHAIKH: Minutes later, another member of CODEPINK, Medea Benjamin, held up a banner reading: ”NRA: Blood Is on Your Hands.” 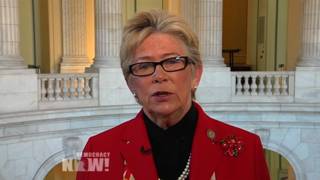 “We Have to Do Something”: Rep. Carolyn McCarthy on the Growing Push for Gun Control After Newtown