The U.S. State Department has taken steps to fire Peter Van Buren, a longtime employee who publicly criticized the Pentagon’s so-called “reconstruction efforts” in Iraq. In 2009 and 2010, he headed two Provincial Reconstruction Teams in rural Iraq. After returning from Iraq, he wrote a book, “We Meant Well: How I Helped Lose the Battle for the Hearts and Minds of the Iraqi People.” Van Buren has also exposed State Department waste and mismanagement on his blog, WeMeantWell.com. For at least six months, he has been under investigation for possible wrongdoings. After his 23-year career with the State Department, he now faces being fired after filing a whistleblower reprisal complaint with the Office of Special Counsel. [includes rush transcript]

JUAN GONZALEZ: We end today’s show with an update on a story we first covered in November. The State Department has taken steps to fire a longtime employee who publicly criticized the U.S. government’s so-called reconstruction efforts in Iraq. The employee, Peter Van Buren, has worked at the State Department for 23 years. In 2009 and ’10, he headed two Provincial Reconstruction Teams in rural Iraq.

AMY GOODMAN: After returning from Iraq, he wrote a book called We Meant Well: How I Helped Lose the Battle for the Hearts and Minds of the Iraqi People. Van Buren has also exposed State Department waste and mismanagement on his blog, wemeantwell.com. He has been facing a State Department investigation for over six months, but it appears the Department only moved to fire him once he filed a whistleblower reprisal complaint with the Office of Special Counsel.

Peter Van Buren is joining us now from Washington, D.C.

Explain what you are going through now. Big headline in the Washington Post yesterday that you’re about to be fired.

PETER VAN BUREN: The State Department sat on their so-called investigation of me, which was finished in December, for several months, and in fact only suggested now was the time to fire me, days before the Office of the Special Counsel was ready to begin their discovery request for documents. The State Department’s timing is curious at best, but in fact is retaliatory, in clear terms.

JUAN GONZALEZ: And the focus, obviously, has shifted more to what’s happened to you rather than the substance of what you were—you have been reporting in this book. Could you talk about some of that?

This is classic big bully government stuff. If they can’t rebut or won’t rebut—and the State Department has never addressed the substance of my book or my blog posts or any of the statements I’ve made—they attack the person. And the investigative report, that I’ve had a chance to see and I’ve obtained through my lawyers from the State Department, shows that it’s full of smears. Political speech about the Secretary of State criticizing some of her policy decisions put me on the Secret Service watch list as a possible threat. In justifying taking away my security clearance, the State Department, out of thin air, determined that I might sabotage their computer networks.

The Department has not stopped there. They’ve sent an investigator out to talk to my neighbors. They’ve gone on fishing expeditions through my emails back for the last three years. These are McCarthy tactics. These are attempts to smear me, to make me look bad, to turn me into the villain and to detract attention away from the fact that I wrote a book about the mismanagement of billions of dollars and the waste of human life, American life, Iraqi life, in the pretend reconstruction of Iraq. Let’s talk about the substance, State Department, not about me.

AMY GOODMAN: Peter Van Buren, talk about WikiLeaks and your post about it.

PETER VAN BUREN: One of the State Department’s major accusations against me, and formed the core of their taking away my security clearance, is that there was a link—not a leak, a link—on my website, my blog at wemeantwell.com, to WikiLeaks documents on another website. These documents talked about a fairly bland congressional visit to Libya in 2009, a government that doesn’t even exist anymore. The State Department has twisted words and twisted regulations to say that that link on my blog constitutes me mishandling classified information, as if, A, I was responsible for the veracity of all the information on the internet, and B, that a link made me responsible for the contents at the other end of the leak. Now I’ve checked the Democracy Now! website this morning. You have hundreds of links. You better be careful: some of those things might be prosecutable.

JUAN GONZALEZ: And Peter Van Buren, we’ve reported over the past couple of years on this enormous crackdown on whistleblowers under the Obama administration. How do you see your case fitting into this broader issue of the rights of whistleblowers?

PETER VAN BUREN: My case luckily exists on the more benign end of a very, very dangerous spectrum. Other people who have blown the whistle on government waste, fraud and mismanagement have lost their jobs, have been threatened or been sent to jail. In my case, the State Department really just wants my head on a stick in the lobby as a warning to its other employees. They want to take away my job, and that so far that has been the worst that they’ve tried to do.

But really, America needs to be very, very thoughtful about what’s going on. If I didn’t tell you about what I saw in Iraq, who would have told you? Who could have told you? Federal employees have an obligation to tell the people, the people we serve, what goes on inside the government that they pay for. Our oath of office is to the Constitution. It’s to the people, to you. It’s not to Hillary Clinton or President Obama or anyone else. I started my State Department career, Ronald Reagan was president. And I served under Republican and Democratic presidents without issue and with distinction. It’s only now that the State Department has become politicized, that has said that if I criticize the Secretary of State, it’s not an act of my First Amendment rights but in fact an act of insubordination. It’s time for America to understand that the Obama administration has prosecuted more people under the Espionage Act in three years than were ever prosecuted by the government for whistleblowing under the Espionage Act since 1917—double much. And that indicates, more than anything else, a very chilling atmosphere here in Washington, designed to keep you from understanding what we do.

AMY GOODMAN: Peter Van Buren, I want to thank you very much for being with us, longtime State Department employee facing dismissal. He is author of the book, We Meant Well: How I Helped Lose the Battle for the Hearts and Minds of the Iraqi People. 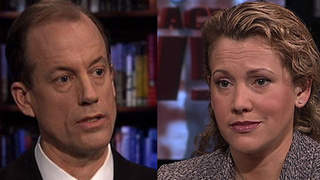