Ramarley Graham, 18, was shot dead on February 2 after New York police officers raided his home without a warrant and shot him dead. He was unarmed. Ramarley’s grandmother and his six-year-old brother were home at the time of the shooting. The police detained the grandmother for hours after the fatal shooting. In this web exclusive, we air more of our interview with Ramarley’s mother, Constance Malcolm; family attorney Royce Russell; and Carlton Berkley, a close friend of the Graham family and a former NYPD detective. This excerpt begins with Constance Malcolm describing how she learned her son had been killed and the police department’s questioning of her mother.

We welcome you all to Democracy Now! Constance Malcolm, our condolences to you and your family.

AMY GOODMAN: Can you tell us what happened to your son Ramarley on February 2nd?

CONSTANCE MALCOLM: All right. I wasn’t there. I was on my way from work, and I got a phone call. And the person said to me, am I home? And I said, “No, I’m on my way from work.” He says, “There’s a whole bunch of cops in the backyard.” I said, “OK, I’m on my way.” Later, like a couple of minutes, I’m calling back, I’m not getting the same person that called me. So after I finally got him now, he said, “Just hurry up and come.” I’m like, “OK.” At this time, my son was dead, but he didn’t want to tell me. So when I got there, the block was cordoned off. A whole bunch of cops was there. I went to them, and I told them who I was. I told them—I said, “I live here.” I gave them my ID. It was like about five different cops that came up to me. “Wait. Wait. Wait.” Finally, one came and said I had to go to the precinct with him. I said, “Fine,” because I didn’t know what was going on. I didn’t know the procedure. I said, “Fine, I’ll go with him.”

I got up to the precinct with them. They took me upstairs. It’s like where they do their investigation. There was a bench in the hallway. He said to me, the officer that took me to the precinct, “Can you sit right here and wait for me?” while he proceeded to go over to the—there’s a little half-a-counter type thing, to speak to somebody behind there, and he went to introduce himself to the police officer behind the half-a-counter. And he said—told me his name. I can’t remember his name. But then he said, “I’m coming from the homicide.” And that’s how I found out actually that my son was dead.

AMY GOODMAN: Did he tell you Ramarley is dead?

CONSTANCE MALCOLM: No, he was talking to another police officer. He told me to sit in the hallway and wait. And that’s how I found, when he said, “I’m just coming from the homicide.”

JUAN GONZÁLEZ: And did they, at any point during that day, tell you anything about what had happened?

CONSTANCE MALCOLM: No. They were so busy telling me I have to sit in the hallway, and finally here come my mom. They ushered her in. And she said to me, because my mom call me “Little Miss,” she said, “Little Miss, they killed Marley.” And at that time, it’s like I froze. I didn’t know what happened after that. So they ushered in at the back and said they had to talk to her. So then, Franks called me. That’s Ramarley’s dad. And he said, “Don’t let her speak to them, because she doesn’t have a lawyer present.” So I said to them, “You cannot speak to her, because she doesn’t have a lawyer.” And, oh, I just said, I said, “You cannot speak to her without a lawyer.” So they pushed her in the back in a room. So after I went back there, trying to find out where they had her, so I’m banging on all these doors I see back there. So, finally, one of the doors open, and I see my mom and the police standing there. And I’m like, “Come out.” And they wouldn’t let her out. So I started like tugging on her jacket. And the police officer pushed her back in the room, locked the door, and then one officer had me restrained with my arms behind me and telling me to be quiet. So then I proceeded to turn to him. I’m like, “What are you going to do? Kill me like you killed my son?”

So, after that, when I see I wasn’t getting anywhere with them—I didn’t know where the baby was, the six-year-old that was in the house. So I went back to the block and to try to find out what was going on. That’s when Chuck came. And I was telling Chuck that I don’t know where my son is. And after Chuck came and told them who he was, explained to them, they were still giving us the runaround.

AMY GOODMAN: Tell us what you found when you got to the house.

CARLTON BERKLEY: Well, when I got to the scene, like Constance said, she was crying, and she didn’t know what was going on, and she at least wanted her little boy. So when I said, “Well, where is he?” and she said, “Well, the police have him,” and I said, “Well, OK, you can get your little boy. How old is he?” “Six years old.” So then I went over to the police officer. It was an inspector there. I forgot his name. I showed him my ID, told him I was a retired New York City detective and that the mother here wants her son. So then he looked at me, and he says, “OK, well, she can get her son.” And I said, “Well, come on, Constance, you could get your son.” At that time, Constance told me, “Nobody was helping me. They told me I couldn’t.” I said, “Well, we’re going to get your son now.” So the inspector then spoke with some other detectives, and within about 10, 15 minutes, her son was driven to where we were in a car. And I believe the person that was with her son was one of the residents in the house, who said that, once the incident happened, they brought the little boy down to him, because he didn’t know anybody else, and that he had had him for several hours, and he was trying to get in touch with Constance, but he was told that the little boy had—he and the little boy had to stay in the custody of the police. Then I went and got the little boy and gave him to Constance.

JUAN GONZÁLEZ: And the reason they were holding or questioning your mother was because she had been there?

JUAN GONZÁLEZ: So they needed to debrief her to find out what she knew or what she had seen or—and they were doing that without any attorney present.

ROYCE RUSSELL: And I wouldn’t be so—

ROYCE RUSSELL: I wouldn’t be so—assume that the police were doing that in the line of their duty. I mean, they knew the facts. They knew what protocol was followed and what protocol wasn’t followed. And I wish I had enough faith in the New York City Police Department to think that they were doing what we call, quote-unquote, as you describe, a “debriefing” to really find out what was going on, as opposed to aligning themselves with a set of facts so they can alleviate themselves from any liability. When you hold someone for several hours, when they’re requesting an attorney, when an attorney is present—my firm was present there at the precinct—and we’re being told, “Hold on. Wait a minute. You can’t speak to her right now.” But for the fact that I am a former assistant district attorney, I knew the protocol. I knew to call the district attorney’s office, Robert Johnson, the felony assistant district attorney that was on duty, to say that “You’re holding my client in a police station. She has her attorney here. We’re here. Let her go.” And I don’t think that was done in the eyes of “we just want to understand what took place,” because they knew what took place. They were present. And the way they treated Constance was a sign of them trying to secure or trying to come up with a story that alleviated them from any liability.

JUAN GONZÁLEZ: Right. Well, in other words, they were trying to debrief her to make sure what she had seen or knew about that might contradict the story, the main line of story that the police officers were putting forth.

ROYCE RUSSELL: Right, wouldn’t hurt them, wouldn’t hurt them. Maybe they could talk to her long enough to get her to say something that wasn’t true. I mean, you’re talking about a very traumatic situation. You’re talking about someone that saw a loved one, their grandson, die before them, and you’re questioning them about his background. You know, “did he have anybody that wanted him? Was anybody after him?” You know no one was after him. You were after him. You chased him, as he walked into his apartment, not knowing that you were even following him. And then, he winds up dead, and you want to debrief the grandmother? I’m not going to assume that it was in the line of duty just to make sure that the story was right and that—you know, that there wasn’t any foul play.

StoryJan 31, 2014“We Will Not Break the Law to Enforce the Law”: NYC to Reform Stop & Frisk, End Racial Profiling 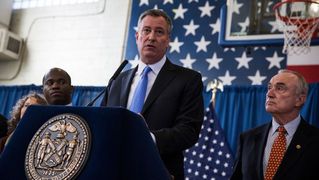 “We Will Not Break the Law to Enforce the Law”: NYC to Reform Stop & Frisk, End Racial Profiling