Six days after the U.S. bombed his village, Yemeni activist Farea al-Muslimi testified on Capitol Hill about the terror of the U.S. drone wars. Al-Muslimi spoke during the Senate’s first-ever public hearing on the Obama administration’s targeted killing program. His family’s village was hit by a U.S. drone strike last week. The White House refused to send an official to defend the program’s legality. “When they think of America, they think of the terror they feel from the drones that hover over their heads, ready to fire missiles at any time,” al-Muslimi says of his fellow Yemenis. “What the violent militants had previously failed to achieve, one drone strike accomplished in an instant.” Others to testify at the hearing included law scholars and members of the U.S. military.

NERMEEN SHAIKH: This is Democracy Now!, democracynow.org, The War and Peace Report. I’m Nermeen Shaikh, sitting in for Amy Goodman.

On Tuesday, the Senate held its first-ever public hearing on the U.S. secret drone program, 12 years after the United States launched its first deadly drone strike. By some estimates, more than 4,000 people have been killed in drone strikes since then. The Obama administration is facing criticism after it refused to send anyone to testify at the Senate Judiciary Subcommittee hearing, despite President Obama’s vow to be more forthcoming about the drone program.

Witnesses at the hearing included Georgetown University Law Professor Rosa Brooks, who served as the Pentagon’s special coordinator for rule of law and humanitarian policy during Obama’s first administration.

ROSA BROOKS: What it comes down to, Senator—Senator Durbin, Senator Cruz, is that right now we have the executive branch making a claim that it has the right to kill anyone anywhere on earth at any time for secret reasons based on secret evidence in a secret process undertaken by unidentified officials. That frightens me. I don’t doubt their good faith, but that’s not the rule of law as we know it.

GEN. JAMES CARTWRIGHT: I am concerned we may have ceded some of our moral high ground in this endeavor. While I continue to support the objectives of this campaign, I commend to the committee for its consideration the recommendations in my written and oral statements.

NERMEEN SHAIKH: The most moving testimony at the Senate hearing on drones came from Farea al-Muslimi, a youth activist from Yemen. His family’s village was hit by a U.S. drone strike last week.

FAREA AL-MUSLIMI: I am from Wessab, a remote village mountain in Yemen. Just six days ago, my village was struck by an American drone in an attack that terrified the region’s poor farmers. Wessab is my village, but America has helped me grow up and become what I am today. I come from a family that lives off the fruit, vegetables and livestock we raise in our farms. My father’s income rarely exceeded $200. He learned to read late in his life, and my mother never did.

My life, however, has been different. I am who I am today because the U.S. State Department supported my education. I spent a year living with an American family and attending an American high school. That was one of the best years of my life. I learned about American culture, managed the school basketball team and participated in trick-or-treat on Halloween.

But the most exceptional is an experience was coming—the most exceptional experience was coming to know someone who ended up being like a father to me. He was a member of the U.S. Air Force. Most of my years—most of my year was spent with him and his family. He came to the mosque with me, and I went to church with him. And he became my best friend in America. I went to the U.S. as an ambassador for Yemen, and I came back to Yemen as an ambassador of the U.S.

I could never have imagined that the same hand that changed my life and took it from miserable to promising one would also drone my village. My understanding is that a man named Hammed al-Radmi was the target of a drone strike. Many people in Wessab know al-Radmi, and the Yemeni government could easily have found and arrested him. Al-Radmi was well known to government officials, and even to local government—and even local government could have captured him if the U.S. had told them to do so.

In the best, what Wessab’s villagers knew of the U.S. was based on my stories about my wonderful experiences here. The friendships and values I experienced and described to the villagers helped them understand the America that I know and that I love. Now, however, when they think of America, they think of the terror they feel from the drones that hover over their heads, ready to fire missiles at any time. What the violent militants had previously failed to achieve, one drone strike accomplished in an instant. There is now an intense anger against America in Wessab.

This is not an isolated incident. The drone strikes are the face of America to many Yemenis. I have spoken to many victims of U.S. drone strikes, like a mother in Jaar who had to identify her innocent 18-year-old son’s body through a video in a stranger’s cellphone, or the father in Shaqra who held his four- and six-year-old children as they died in his arms. Recently in Aden, I spoke with one of the tribal leaders present in 2009 at the place where the U.S. cruise missiles targeted the village of al-Majalah in Lawdar, Abyan. More than 40 civilians were killed, including four pregnant women. The tribal leader and others tried to rescue the victims, but the bodies were so decimated that it was impossible to differentiate between those of children, women and their animals. Some of these innocent people were buried in the same grave as their animals. In my written testimony, I provided detail about the human cost of this and other drone strikes based on interviews I have conducted or have been part of.

I have a personal experience of fear—of the fear they cause. Late last year, I was in Abyan with an American journalist colleague. Suddenly, I heard the buzz. The local people we were interviewing told us that based on their past experiences, the thing hovering above us was an American drone. My heart sank. I felt helpless. It was the first time that I had truly feared for my life or for an American friend’s life in Yemen. I couldn’t help but think that the drone operator just might be my American friend with whom I had the warmest and deepest relationship here. I was torn between this great country that I love and the drone above my head that could not differentiate between me and some AQAP militants. It was one of the most divisive and difficult feeling I have ever encountered. I felt that way when my village was also droned.

Thank you for having this hearing. I believe in America, and I deeply believe that when Americans truly know about how much pain and suffering the U.S. air strikes have caused and how much they are harming efforts to win hearts, minds and grounds in Yemen and hearts and minds of the Yemeni people, they will reject this devastated—devastating targeted killing program. Thank you.

NERMEEN SHAIKH: That was Yemeni youth activist Farea al-Muslimi speaking yesterday at the Senate’s first-ever public hearing on the Obama administration’s drone and targeted killing program. His village was bombed six days ago by a U.S. drone. After a short break, we will turn to Jeremy Scahill, author of the new book, Dirty Wars: The World Is a Battlefield. 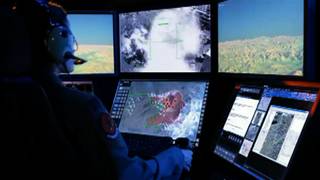