Allan Nairn: After Ríos Montt Verdict, Time for U.S. to Account for Its Role in Guatemalan Genocide

Following last week’s guilty verdict in Guatemala’s historic genocide trial, reporter Allan Nairn says the United States should follow Guatemala’s lead and indict the Reagan administration officials who supported the genocide under General Efraín Ríos Montt. “All of [these crimes] were crimes not just of General Ríos Montt, but also of the U.S. government,” Nairn says. Former President Ronald Reagan once called Ríos Montt “a man of great personal integrity.” After the verdict, Judge Yassmin Barrios ordered the attorney general to launch an immediate investigation of “all others” connected to the crimes.

AMY GOODMAN: As we wrap up, investigative journalist Allan Nairn, the compensation end of the trial, what you feel needs to be done now? You have covered this throughout these decades.

ALLAN NAIRN: Well, all of the crimes that Rigoberta Menchú just described were crimes not just of General Ríos Montt, but also of the U.S. government. The U.S. prosecutors in Washington should immediately convene a grand jury with two missions: first, coming to the aid of the Guatemalan attorney general, who has just been ordered by the court to investigate all others involved in Ríos Montt’s crimes, by releasing all classified U.S. documents about what happened during the slaughter, which U.S. personnel were involved, providing to the Guatemalan attorney general a list of all Guatemalan army officials and security force officials who were on the payroll of the American CIA, and then proceeding to issue indictments against U.S. officials who acted in the role of accessory or accomplice to the crimes for which Ríos Montt has already been convicted.

AMY GOODMAN: And those people, you believe, would include?

ALLAN NAIRN: The top officials of the Reagan administration who made the policy—President Reagan is deceased, but his top aides, including Elliott Abrams and many others, are still alive; the U.S. CIA personnel on the ground who worked within the G2, the military intelligence unit that coordinated the assassinations and disappearances; the U.S. military attachés who worked with the Guatemalan generals to develop this sweep-and-massacre strategy in the mountains. There would be hundreds of U.S. officials who were complicit in this and should be subpoenaed, called before a grand jury and subjected to indictment. And the U.S. should be ready to extradite them to Guatemala to face punishment, if the Guatemalan authorities are able to proceed with this. And General Pérez Molina is one who should be included. And Pérez Molina, himself, was among—

ALLAN NAIRN: Yes—is among those who was on the CIA payroll.

AMY GOODMAN: We will leave it there. Allan Nairn, investigative journalist, Rigoberta Menchú, Nobel Peace laureate, we thank you so much for being with us in Mexico City. 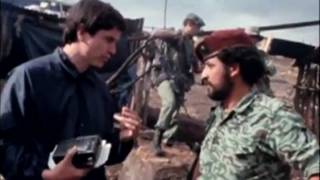