On May 28, around 100 Wal-Mart workers in Florida, Massachusetts and California walked off the job for an unprecedented series of “prolonged strikes” against worker retaliation. Organizers of OUR Walmart describe the action as the longest Wal-Mart strike to date. Many of the striking workers traveled to Wal-Mart’s annual shareholder meeting in Arkansas last week. In this web exclusive, we speak with Josh Eidelson of The Nation.

JOSH EIDELSON: Last year, after a series of failed efforts by unions, some using traditional National Labor Relations Board election tactics, some that were air wars involving all kinds of attempts to embarrass the company with very little involvement from workers, we saw something very different emerge in 2011: this group called OUR Walmart, organizing in concert with other groups organizing Wal-Mart warehouse workers, Wal-Mart workers who are involved abroad, and then, last year, these first-ever strikes. So, last year on Black Friday, 400-some Wal-Mart workers went on strike. We’ve now seen, over the past couple weeks, the longest strike in Wal-Mart’s U.S. history in the retail sector. This strike involved 100-some workers who went to Arkansas to crash Wal-Mart’s party there.

The question for these workers now is: What happens when they go back to work? Those workers have begun returning to work, and their challenge is going to be telling the story, amplifying the grievances, deepening their relationships with their co-workers in a way that engages more of those co-workers, that silent majority, to join them and to step up in the face of this well-founded fear of retaliation from Wal-Mart. And organizers have promised, in interviews that I’ve conducted over the past couple weeks, that by the end of the year they have pledged that we will see something larger than what happened on Black Friday last year.

JOSH EIDELSON: Larger than the strike—

JOSH EIDELSON: —that took place on Black Friday, when we had 400-some people walk off the job for one day.

AARON MATÉ: Josh, your sense of how workers, the rank-and-file workers, responded to OUR Walmart at this meeting in Arkansas last week? Were there—you mentioned one interaction during the show at a protest, but were there efforts to engage with Wal-Mart workers by these striking—by the striking colleagues?

JOSH EIDELSON: There were some efforts. But in my observation, in my interviews, my sense is that the workers who were flown in by Wal-Mart largely kept their distance. In general, they were chaperoned by Wal-Mart managers, both at the meeting and at various events. So, for example, the Wal-Mart strikers went to the Crystal Bridges Museum, which is largely funded by Wal-Mart. They brought a piece of art they had created and said, “Since you hang up all these paintings from the Waltons, hang up this piece of art we brought you.” And they ran into a number of these workers who were brought by Wal-Mart. Their efforts to engage with them didn’t get very far. When I talked to some of those workers brought by Wal-Mart, one said, “Oh, those are the people we were warned about,” and then walked away. One said, “Well, they’re going to do their thing. We’re going to do our thing.” Several declined to be interviewed or said they didn’t think they were allowed to be interviewed while they were there. And these are workers who, according to local media reports, had already at that point sat in a meeting where top executives told them, ”OUR Walmart is a group of paid agitators who think you’re too stupid to know how good your job is.”

AMY GOODMAN: Josh, Wal-Mart has a very comprehensive ad campaign that I see all the time on television, that has various Wal-Mart workers saying their name and saying how Wal-Mart offers them chances for career and advancement. Is this in response to OUR Walmart?

JOSH EIDELSON: There are—

JOSH EIDELSON: There are several signs that together appear to indicate that Wal-Mart is feeling a level of stress about this campaign that it has not felt about the, frankly, not very effective campaigns that unions have backed in the past. So Wal-Mart is doing this PR campaign. It was even playing these ads, showing part of this ad campaign in the Arkansas airport when I flew out. At the same time, Wal-Mart has seen departures of top executives and a few of the CEOs of other companies on its board. It’s made this announcement that it’s going to change its scheduling system to make it easier for people to be promoted. And then, meanwhile, it has this anti-organizing campaign that’s going on in the stores. So, yes, Wal-Mart is responding in a significant way, because you have not seen this kind of organizing in the belly of the beast of anti-unionism in the United States before.

AARON MATÉ: Can you talk about how Wal-Mart has responded in the past to efforts to unionize? I’m thinking of what happened in Canada, also the example of the meat-cutting department at a store here in the U.S.

JOSH EIDELSON: Yes, that’s right. So, Wal-Mart—in an anti-union environment across the board in the United States, Wal-Mart has still distinguished itself with its zeal and its creativity in finding ways to suppress organizing. So, in Canada, workers won union recognition in Canada, and the entire store was shut down. In the United States, a handful of workers at one store, who were meat cutters, won a union election, and Wal-Mart responded by eliminating the entire meat-cutting department nationwide, because it was a department that they presumably observed would be ripe for unionization. And so, Wal-Mart has made a name for itself even among the ranks of anti-union U.S. companies in its willingness to suppress organizing, both through legal actions and, based on credible allegations, through illegal actions.

AMY GOODMAN: And the other organizing that’s going on around the country right now among fast-food workers, can you make parallels? Are there connections?

JOSH EIDELSON: Oh, absolutely. So what we see now is this rise in the comprehensive campaign and the—using community, media, political, legal efforts, but, married to it, a rise in this different template of strikes, where we see strikes by workers who go out for a short period of time, who are not generally trying to shut down the workplace, but instead are trying to embarrass the company and engage the public, who specifically cite retaliation as the cause for the strike, because that gives them a bit more legal protection, and who represent a minority of the workforce—these minority strikes where, rather than getting everybody behind you first and taking them out, you have a courageous minority that thinks that their courage in their confrontation with the boss will lead the campaign to grow by engaging more co-workers. And in the case of the fast-food strikes in New York and elsewhere and in the case of the workers at Wal-Mart, there are at least some cities where that’s happened.

AMY GOODMAN: I wanted to ask you about—these are some old reports. One, “Ex-Wal-Mart Worker Admits to Spy Campaign.” This is from 2007. “A Wal-Mart employee, who was fired last month for intercepting a reporter’s calls, says he was part of a sophisticated surveillance operation.” Do you know anything about those? Now, this was years ago. This was, what, six years ago.

JOSH EIDELSON: So that’s a case—Nelson Lichtenstein wrote about it in his book, The Retail Revolution. It’s not clear whether that particular worker was talking about something that actually happened or being opportunistic and saying, “Well, the best explanation, if you get caught doing something at Wal-Mart, is that it’s about Wal-Mart’s anti-unionism, because everyone knows how extreme Wal-Mart’s anti-unionism is.” But what is very clear, as I’ve reported at The Nation, based on workers I’ve talked to, based on other reports that have come out, is that Wal-Mart has a consistent pattern of doing nearly whatever is possible to avert organizing. Wal-Mart denies retaliating, but there are credible allegations from around the country. And Wal-Mart does not deny that it holds mandatory meetings in which it tells workers why they should not be involved in trying to change their company. That’s not the behavior of a company that actually thinks these hundred workers don’t represent anyone else.

AMY GOODMAN: Josh Eidelson, I want to thank you very much for being with us, writer for The Nation. This is Democracy Now!, democracynow.org, The War and Peace Report. 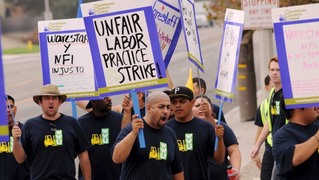