Andrew Bacevich on “Breach of Trust: How Americans Failed Their Soldiers and Their Country”

In his new book, “Breach of Trust: How Americans Failed Their Soldiers and Their Country,” Andrew Bacevich looks at the growing gulf between America’s soldiers and the society that sends them off to war. Bacevich served in the U.S. Army for 23 years and retired at the rank of colonel. He is now a professor of history and international relations at Boston University. His son, Andrew, died in the Iraq War. “Now that the war in Iraq has ended,” Bacevich writes, “Americans might ponder the question of what the loss of several thousand soldiers there signifies. I have grappled with that question myself, not altogether successfully.”

AMY GOODMAN: We continue our conversation with military historian, Vietnam veteran, Andrew Bacevich, professor of history and international relations at Boston University. He has written a number of books on U.S. military and foreign policy. Just out is Breach of Trust: How Americans Failed Their Soldiers and Their Country.

It’s very good to have you with us to talk about this. One of the things you talk about is why the world’s best military is not winning wars. Why?

AMY GOODMAN: That you were a part of.

ANDREW BACEVICH: Yes, at least served in. After the war, we abandoned that tradition. Richard Nixon ratified that abandonment by ending the draft and creating what we call the all-volunteer force, which is really a professional army. Now, the professional army offers many advantages. It’s well trained. It’s well disciplined. But the record says it really doesn’t win wars. In particular, it doesn’t—hasn’t won wars since 9/11. Our excellent, in many respects, military knows how to start wars; it doesn’t know how to end them. So, the story—the military history of the post-9/11 era is a story of protracted wars ending in unsatisfactory ways that cost enormous amounts of money and lives and end up probably reducing America’s standing in the world. So the argument of the book is: We need to jettison this system based on a professional military; we need to revive the military system based on the tradition of the citizen soldier.

ANDREW BACEVICH: Well, our—I mean, put simply, we’ve got too few warriors, too much war. When the George W. Bush administration launched the wars in Afghanistan and Iraq, expecting that they would be short wars, won quickly and easily, and miscalculated, we ended up with protracted wars and not enough soldiers to get the job done. And the Bush administration basically filled that gap by inviting in huge numbers of private contractors, which had the effect, of course—war has always been, to some degree, for some people, a profit-making enterprise. In our time, it has become to a far greater extent a profit-making enterprise, and an enterprise that invites corruption.

AMY GOODMAN: You lost your son in Iraq. He went to war, like you did. You went to Vietnam. Did that change your thinking?

ANDREW BACEVICH: Well, it’s long been a rule of mine not to want to talk about private matters, but I don’t think so. Well, I mean, of course it does. I mean, we are all affected by personal loss and personal tragedy. But my skepticism about this military system and its shortcomings certainly pre-existed my son’s death.

AMY GOODMAN: You talk about needing a national service in this country. What do you mean?

ANDREW BACEVICH: Well, I mean, if one would agree that reviving the citizen soldier tradition is a good idea, then you say, “Why?” And I always get, “Well, then you must be in favor of the draft.” And I say, “Well, I’m not necessarily in favor of a draft, if only because I don’t think a draft is politically feasible. But I do think it would be a good idea for us, as citizens, to have a conversation about implementing a program of national service.” Now, that differs from the draft in this sense. A program of national service is one that says all 18-year-olds—basically, kids as they come out of high school—all 18-year-olds owe a period of service to country or community, some of them serving in the military, others serving in a variety of other capacities, whether we’re talking Teach for America, Peace Corps, protecting the environment. There would be a myriad of opportunities.

AMY GOODMAN: There’s a lot to do in Colorado right now, I bet.

ANDREW BACEVICH: There’s a lot to do in Colorado. From my point of view, a program of national service would close the gap between the military and society, which I think opens the door to a misuse of our military, and simultaneously could enrich the reigning concept of citizenship, you know, suggesting that citizenship isn’t simply about prerogatives, it’s about obligations and responsibilities. And I think that, arguably, that would be good for the country as a whole.

ANDREW BACEVICH: Thank you very much.

AMY GOODMAN: This is Democracy Now! When we come back, Professor Angela Davis talks about her home town, Birmingham, Alabama, on this 50th anniversary of the bombing of the Birmingham church that killed four little girls. Stay with us.

“Terrorism is Part of Our History”: Angela Davis on ’63 Church Bombing, Growing up in “Bombingham”

NEXT“Terrorism is Part of Our History”: Angela Davis on ’63 Church Bombing, Growing up in “Bombingham” 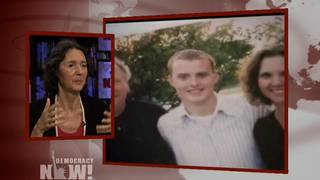