No Debate: Antiwar Voices Absent from Corporate TV News Ahead of U.S. Attacks on Iraq & Syria

A new analysis of corporate TV news has found there was almost no debate about whether the United States should go to war in Iraq and Syria. The group Fairness and Accuracy in Reporting found that of the more than 200 guests who appeared on network shows to discuss the issue, just six voiced opposition to military action. The report, titled “Debating How — Not Whether — to Launch a New War,” examines a two-week period in September when U.S. involvement in Iraq and Syria dominated the airwaves. The report also finds that on the high-profile Sunday talk shows, out of 89 guests, there was just one antiwar voice — Katrina vanden Heuvel, editor of The Nation. We speak to Peter Hart, activism director at FAIR.

StoryMay 25, 2017Scahill & Greenwald: What If All Victims of War Received the Media Attention of Manchester Victims?

AARON MATÉ: A new analysis of corporate TV news has found there was almost no debate about whether the U.S. should go to war in Iraq and Syria. The group Fairness and Accuracy in Reporting found that of more than 200 guests who appeared on network shows to discuss the topic, just six voiced opposition to military action. On the high-profile Sunday talk shows, out of 89 guests, there was just one antiwar voice: Katrina vanden Heuvel, editor of The Nation.

AMY GOODMAN: To talk more about the report, we’re joined by Peter Hart, activism director at FAIR, the author of the new report called “Debating How—Not Whether—to Launch a New War.” So, Peter, tell us what you found.

PETER HART: Like you said, the numbers sort of speak for themselves—205 guests, 125 were pro-war, six were against the war. This is the wars in Iraq and in Syria. The debate sometimes looked rather passionate; it had the appearances of a real debate. But what they were really debating was the mechanics of war, whether we should drop bombs just on Iraq or on Iraq and Syria, whether Obama was aggressive enough. There were critics of the White House, but they were critics that were pro-war, people like John McCain, who were adamant that whatever Obama was doing was not nearly enough and that the answer to this was to inflict more violence in Iraq and in Syria. That was the spectrum of debate, from Henry Kissinger to Samantha Power.

AMY GOODMAN: It’s also interesting that you found that, overwhelmingly, pro-war opinions voiced on television and also the majority Democrat.

PETER HART: Yeah. You know, you have the Democratic Party, in the person of Barack Obama, and then his affiliates inside the White House were on TV to make the case for war, but there was never a consideration to present antiwar opinions to oppose those ideas. As Chris Matthews said on MSNBC’s Hardball, everybody is for drone strikes, everybody is for airstrikes with this war. There is an acknowledgment that there’s no need to have a debate about whether the country should go to war. It’s a decision about what kind of war we should be waging.

AARON MATÉ: What’s amazing is we still see on corporate television this preponderance of voices who supported the Iraq War. Is there any effort to engage the networks on why they keep having these guests back?

PETER HART: Well, I think people ask this question all the time, because it’s just an obvious one. You had Phil Donahue sitting right here just a week ago saying—explaining what happened in the run-up to the war, 2002, 2003. And the question is—

AMY GOODMAN: When he was fired.

PETER HART: When he was fired from MSNBC and when he said dissent was basically eliminated from mainstream media. Has anything changed from 2002 to 2003 to right now? And the answer in the study is, absolutely not. If anything, the debate is more restricted now.

AMY GOODMAN: How did you do this study?

PETER HART: These are the guests that showed up for debate and discussion segments—so not sound bites—people who are invited to one-on-one interviews on the Sunday shows, on PBS NewsHour and on a couple of the high-profile cable shows—Wolf Blitzer, Special Report on Fox News Channel.

AMY GOODMAN: You’re activism director of FAIR. What are you recommending?

PETER HART: Well, you know, the most obvious thing to ask people to do is to contact these shows and say, “If we’re going to war”—and, you know, this week Congress is going to debate this war, the Authorization for Use of Military Force—”have people who oppose the war.” I know it sounds like a radical idea, but antiwar activists are more than happy to show up on television and debate this, if they’re given the chance.

AMY GOODMAN: And, of course, if you look back to 2002 and 2003, it was the antiwar activists, the few peace activists you saw on television, who ultimately were correct, that there weren’t weapons of mass destruction.

PETER HART: Absolutely. And, you know, there isn’t a question right now about WMDs. The question is: Is violence the answer to this political problem that we have? And you would think the lessons from Afghanistan, from Iraq and from Libya would be there’s a need to have this debate. But the big media says no.

AMY GOODMAN: Peter Hart, thanks so much for being with us, activism director of Fairness and Accuracy in Reporting. 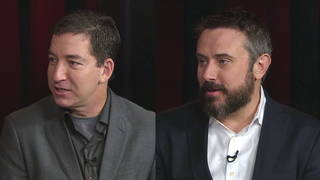