While each House seat is up for grabs in today’s midterms, only a few dozen races are competitive enough to be in play. It is control of the Senate that hangs in the balance, coming down to around 10 key races. Republicans need to gain six seats to recapture Senate control, with a slight edge over Democrats in the advance polls. A few races are so close that they could go to a runoff. That potentially means we end Tuesday night with the Senate still undecided. Senate control is crucial, with Republicans vowing an agenda that includes more cuts to public spending, and repealing environmental regulations, such as the U.S. Environmental Protection Agency’s limits on emissions from coal-fired power plants and control of committees addressing global warming. But no matter how the Senate goes, we can expect mixed results at the state level as incumbent governors from both main parties face a voter backlash. The midterms will also see votes on 147 ballot measures, covering a number of key issues. Four states will vote on raising the minimum wage — Alaska, Arkansas, Nebraska and South Dakota. Polls show the measures will likely pass despite them all coming in Republican states. We get a roundup of the key issues from John Nichols and Lee Fang, contributors to The Nation magazine.

AMY GOODMAN: Our guests are Lee Fang of The Nation and Republic Report and John Nichols, whose latest book is Dollarocracy: How the Money and Media Election Complex Is Destroying America. Why don’t you weigh in from Madison, Wisconsin, John? Talk about the significance of the race there, which is very tight, the gubernatorial race, which has great significance not only talking about these midterm elections, but what is going to happen in 2016, as well, with the presidential elections.

JOHN NICHOLS: Without a doubt. The important thing to remember about the 2010 elections, four years ago, is that they swept in a wave of Republican governors, who were very different than previous Republican governors. These governors were committed to an austerity agenda, as regards public education and public services. They were also committed to a very aggressive anti-labor agenda.

And Wisconsin highlighted that. Governor Scott Walker, just weeks after becoming the governor of Wisconsin, implemented a series of assaults on labor unions that led to one of the largest mobilizations of workers and their supporters that we’ve seen in modern American history, back in 2011. There was an attempt to recall Walker. It did not succeed. Now he’s on the ballot again, and it’s an intense race. He’s being challenged by a woman named Mary Burke.

And Walker’s re-election race is really one of the key tests, because if he wins, there is simply no question that he will not stop and just say, “Hey, thanks for re-electing me.” His victory tonight will be a transition into a 2016 presidential race. And everybody in Wisconsin is very conscious of that. So, this has been an incredibly intense race.

AMY GOODMAN: And talk—talk about his opponent, John—

JOHN NICHOLS: But I do want to step back for one second and just—

AMY GOODMAN: —for a minute, if you could talk about Mary Burke—

JOHN NICHOLS: Absolutely. Mary Burke is an interesting figure. She’s a Madison School Board member, a wealthy woman. She is a member of the family that started the Trek bicycle company. She has not actually been closely identified with a lot of politics in the past, a philanthropist more, but she got into this race, and she has run a very fascinating campaign against Walker. She’s essentially argued he’s just no good at economics. His austerity agenda has stalled out the economy in Wisconsin. Wisconsin trails neighboring states. And she’s made a very practical argument for getting rid of him.

But underpinning her run is all of the passion that has existed in this state in the past. And so, it’s been a very intense, actually quite ugly race. At the close of it, there was a pretty brutal attempt to smear Mary Burke, suggesting that she had troubles in her business past. It was so ham-handed and so over-the-top that the largest newspaper in the state, the Milwaukee Journal Sentinel, said it said more about the people trying to smear Burke than it did about her. And yet, it gives you a sense of how this race has played out. Scott Walker is absolutely desperate to get re-elected. He wants to hold onto this office, not to govern Wisconsin, but to launch a presidential campaign. Mary Burke, in contrast, has said she really wants to be the governor of Wisconsin. She’s made a very plain-spoken, very straightforward argument.

And polling has suggested that really since the summer this has been a close race. Right now, the RealClearPolitics poll of polls, where they analyze them all, suggested it’s a toss-up, one of 14 toss-up races for governor this year. And that’s an important thing to remember, because we’re focused so much on the Senate races, we sometimes lose sight of the fact that the biggest signal that comes out of tonight’s voting may well be the results of these governor races, especially in the states where Republican governors, who have implemented forms of austerity, are being challenged by folks who say this just doesn’t work.

AARON MATÉ: Well, John, talk about the Senate. The Republicans need just six seats to take control. What are the key races that you’re watching?

JOHN NICHOLS: I’m watching a lot of races. There are eight races that are generally rated as toss-ups. And they are all—that means they’re all very, very close. I think we have to keep an eye on the Kentucky race that you’ve talked about. Certainly the Georgia race that’s been discussed, that may well go to a runoff. It’s also possible the Louisiana race will go to a runoff. That could keep all of this competition in play into December, perhaps even into January.

But there are a bunch of other races that are very, very important. And what is notable is that two states, I think, should be watched especially closely. That’s Iowa, where Bruce Braley is running against Joni Ernst—Braley is the Democrat, relatively populist guy; Joni Ernst very, very right-wing candidate—and Colorado, where Mark Udall is seeking re-election against Cory Gardner. Both of these are close, intense races. If the Democrats lose these seats, which the party currently holds, it’s hard to imagine how they maintain their control of the Senate.

But there’s more than just the partisan balances there. I think people should be very conscious. Mark Udall in Colorado has been among the one or two, maybe three, senators who has really stood up to the NSA. He is one of the boldest senators as regards privacy rights and a host of concerns that cross party boundaries. And so, in these Senate elections, while we talk a lot about the fight for control of the Senate, we should also be conscious that some of these senators are unique figures. And if Udall gets beat in Colorado, you will lose one of your loudest voices on NSA issues.

AMY GOODMAN: And what about the significance of the surge of Cory Gardner? How is that happening, John?

JOHN NICHOLS: I am not connected.

AMY GOODMAN: John, we hear you. John, can you hear us? John, if you could talk about the surge of Cory Gardner in Colorado? Let me ask that question to Lee Fang.

LEE FANG: Well, Colorado, Amy, has been a swing state for many years. In fact, President Obama and national Democrats can trace their current fortunes back to 2006 when, in the wake of the 2004 presidential election, a group of Democratic donors poured resources into Colorado to flip that state to the Democratic column. And since then, we’ve seen that state trending blue for the last eight years. Now, Republicans have become obsessed with reversing that trend, and they have, in turn, poured their own resources, not only into grooming candidates, but into think tanks, into local media outlets and into data survey efforts, to increase Republican turnout. And in this political arms race, you see candidates like Cory Gardner, who are very close to the Republican donor network that created this Republican resurgence, where Republicans might not only take the Colorado Senate seat, they could also take the governor’s office, as well. So, Cory Gardner is very close to energy interests. He attended the secret Koch gathering last June, over the summer. And he’s benefited from a lot of that dark money and outside coordination that we were discussing earlier.

AMY GOODMAN: We’re going to have to leave it there, but I thank you both for being with us. And of course we’re going to continue to follow this tonight. We’ll be doing a live broadcast on the midterm elections beginning at 7:00 Eastern Standard Time. From the studios of Democracy Now! in New York, we’ll be covering the country. Lee Fang’s recent investigation for The Nation is “Mitch McConnell’s Freighted Ties to a Shadowy Shipping Company.” We’ll link to it. He’s also blogged about how if the GOP takes the Senate, climate-change deniers will control key committees—reporting fellow at The Investigative Fund, blogs about money in politics at the Republic Report. And thanks so much to John Nichols, political writer for The Nation, latest book, Dollarocracy.

That does it for our show. I’ll be speaking in Washington, D.C. on Thursday. Check our website. 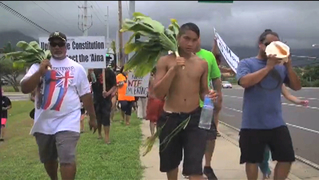