Residents who live near areas of oil and natural gas fracking have long complained that the industry has poisoned their water with toxic chemicals. Now a new investigation is shedding light on another concern: air quality. The new report, “Fracking the Eagle Ford Shale: Big Oil & Bad Air on the Texas Prairie,” is the result of an eight-month investigation by InsideClimate News, the Center for Public Integrity and The Weather Channel. We speak to David Hasemyer and Lisa Song, two of the reporters who worked on the investigation.

JUAN GONZÁLEZ: We end the show by looking at a major new report titled “Fracking the Eagle Ford Shale: Big Oil & Bad Air on the Texas Prairie.” It’s the result of an eight-month investigation by InsideClimate News, the Center for Public Integrity and The Weather Channel. Now, a new investigation shedding light on—I’m sorry—

AMY GOODMAN: On really all of this.

JUAN GONZÁLEZ: On all of this, and we’re going to have a guest talk about it now.

AMY GOODMAN: That’s right. We’re joined in San Diego by David Hasemyer, and in Boston, Lisa Song. Lisa Song [and David Hasemyer were] also part of the team that won the Pulitzer Prize for National Reporting for the InsideClimate News series, “The Dilbit Disaster: The Biggest Oil Spill You’ve Never Heard Of.” We turn right now to Lisa Song.

Can you talk about what you found in this major new report you did on fracking the Eagle Ford Shale?

LISA SONG: Sure. This report that we did was done in collaboration with the Center for Public Integrity and The Weather Channel. And we decided to focus on air quality and air pollution issues from natural gas development, instead of water, because the issues with water have been looked at before.

And what we found in the Eagle Ford is that—the Eagle Ford is a huge, 20,000-square-mile area in South Texas. And there is right now one of the biggest oil and gas booms in the nation. But it hasn’t gotten the national attention that places like the Marcellus Shale in Pennsylvania have. And what you have there in South Texas is this boom. And looking through air permits and looking at the regulatory regime, we found that there all of these facilities, that the wells and compressor stations and all the infrastructure that comes with the boom, that are emitting industrial-sized air pollutants into the air. And you’re talking about things like hydrogen sulfide, which can be deadly, volatile organic compounds like benzene that can cause cancer in the long term. And you have that alongside many, many hundreds of residential complaints about things that are related to the industry. So you have residents complaining to regulators about headaches and foul odors and trouble breathing and all kinds of respiratory problems.

And at the same time, you have a regulatory system that knows very little about the air quality in the area, because they have only five permanent air monitors in the entire Eagle Ford. And none of these monitors are in places with a lot of drilling. Also, you have regulatory agencies that are very business-friendly and very closely intertwined with the oil and gas industry. And that’s something that David can talk about, because he looked into the politics.

JUAN GONZÁLEZ: Yeah, and, David, what about that, in the state of Texas, and its basically laissez-faire attitude toward this kind of pollution?

DAVID HASEMYER: We went to Texas on a number of occasions with our colleagues from the Center for Public Integrity and The Weather Channel. And we spent a lot of time in the homes of people, walking the farms and the ranches of people who are affected by the emissions. These are folks who are longtime residents of this area, and it’s a very rural, very quiet area of the state of Texas. These are people who had expectations of being able to live quiet lives in retirement and to farm and ranch without the threat of development near them. In the last five years, the Eagle Ford has boomed. These folks, who once lived in a rural area, are now finding themselves with dozens of wells and processing plants surrounding them.

They have very few places to turn for help. They have two regulatory agencies in Texas. The primary agency is the Texas Commission on Environmental Quality, and this is an agency that has commissioners appointed by the governor of Texas, Rick Perry, who has made it publicly known that he’d like to dismantle the EPA. His attorney general has sued the EPA more than a dozen times. So the folks in Texas feel that they are somewhat disenfranchised and that they have very, very few people who are on their side who can champion their cause. These are truly the little people trying to fight government and trying to fight big business.

AMY GOODMAN: I mean, the kind of gassing off—the flaring off of the gas we see, I saw this in Nigeria in the Niger Delta. At the time, it wasn’t even allowed in the United States. And the people, in watching your video, complaining of feeling like an elephant is on their chest as they breathe in the soot from this flame. This is an area the size of Massachusetts, Lisa?

AMY GOODMAN: And so, what happens now? What happens next? Even if you will not allow fracking on your own property, everyone around you has this—is allowing it, and so you’re still deeply affected.

LISA SONG: Yeah. What we found was a clear story of people who have—there are some people who have benefited financially from this boom, and there are many others who have not. So, it’s clearly a case of the haves and the have-nots. And for the people who either can’t or won’t lease their land to the industry, they are often surrounded by neighbors who have done so. And so, to them, they see no benefit at all, and all they have are the odors and the flares and the lights and noise pollution, traffic. And they—all they end up seeing are the disadvantages of this boom. And so their lives have not gotten better, it’s gotten worse.

AMY GOODMAN: We’re going to have to leave it there, but we will certainly link to your report. Lisa Song and David Hasemyer, reporters with InsideClimate News, who worked on “Fracking the Eagle Ford Shale: Big Oil & Bad Air on the Texas Prairie,” an eight-month investigation done in collaboration with the Center for Public Integrity and The Weather Channel. 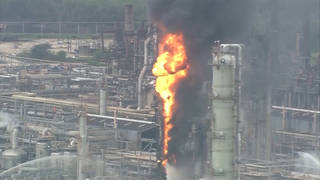