The cost of a college degree has grown by over 1,120 percent in the past three decades, far surpassing price hikes for food, medical care, housing, gasoline and other basics. Coupled with $1.2 trillion in student debt, the U.S. is facing a crisis that threatens not just the economy but the nation’s education system itself. The issue is explored in the riveting new documentary “Ivory Tower,” which argues the model for higher education in the U.S. has become unsustainable. The film contrasts the struggle for quality, affordable education with a growing corporate atmosphere on college campuses, where hundreds of millions of dollars go to football stadiums, lavish salaries and high-end perks. We are joined by “Ivory Tower” director and producer Andrew Rossi. The film opens this Friday in New York City and Los Angeles.

AMY GOODMAN: Let’s go to a clip or the trailer of your film. It’s called Ivory Tower, arguing the model for higher education in the United States is unsustainable. The film contrasts the struggle for quality, affordable education with a growing corporate atmosphere on college campuses where hundreds of millions of dollars go to football stadiums, lavish salaries, high-end perks. The film, Ivory Tower.

ANDREW DELBANCO: The very concept of the institution of higher learning is about to be broken.

ANYA KAMENETZ: College tuition has increased more than any other good or service in the entire U.S. economy.

PETER THIEL: It’s like a subprime mortgage broker that ripped you off.

DAPHNE KOLLER: If I do ever have kids, my private loans will be directly passed to them, even if I die. It’s a nightmare.

SEN. ELIZABETH WARREN: The government will make $184 billion off our kids trying to get an education.

ANDREW DELBANCO: Colleges have turned into these large businesses. It’s a feeding frenzy to outbuild your rivals.

CLAYTON CHRISTENSEN: It created a race.

ANYA KAMENETZ: You’ve got to cater to out-of-state students who want to party.

ANDREW DELBANCO: Some of our leading presidents can be quite shameless in the size of their compensation.

ANYA KAMENETZ: The older generations that criticize the millennials grew up in a time when you could go to a state university and pay your way through with summer jobs.

ANDREW DELBANCO: There’s going to be a collapse. People just don’t want to pay for it anymore.

AMY GOODMAN: The trailer for the new documentary Ivory Tower, directed by our guest, Andrew Rossi. Is college worth it, Andrew?

ANDREW ROSSI: Well, we do see statistics that show that those who have a college degree make, in median lifetime earnings, a million dollars more than those who have only a high school diploma. But what that very powerful statistic leaves out are all those who don’t complete, who don’t finish their college experience, and those who have student loan debt that is so paralyzing when they graduate that they’re not able to pursue life choices.

AMY GOODMAN: There’s something very humorous here—I mean, incredibly sad—but if you had a college degree, you’d have to ask, “Should I go to college?” because in assessing the costs—though what about those who will say, and you’ve interviewed many of the elite university presidents, you know, “Liberal arts education is priceless”?

ANDREW ROSSI: Absolutely. And we celebrate the role of college as a sort of bridge between adolescence and adulthood, the idea that you should have an opportunity to find out what you are good at and what you care about. But that’s a sort of luxury for many people who are unable to pay for this education that is just spiraling out of control in terms of its cost.

AARON MATÉ: Well, you paint a picture in the film of sort of colleges gone wild. Can you talk about some of the lavish spending expenditures that are now a priority on campus for these schools?

ANDREW ROSSI: That’s right. We see how the financial model of higher education really encourages universities to grow bigger and to attract the student loan dollar with amenities that would be exciting for a 17- or 18-year-old who’s choosing between schools. And so we see, in some cases, laboratories, dormitories. And, in particular, Cooper Union, the school here in New York City, that has been free for over 150 years, and took out a $175 million loan to build a new building at a cost of $1,000 a square foot, which is akin to a luxury hotel. So there is a feeding frenzy, as Andy Delbanco says in the film, to constantly build and make the school more prestigious in terms of rankings. And it’s just a system that is structurally out of control.

AMY GOODMAN: I want to turn to another clip from Ivory Tower that looks at the rising cost of higher education.

CLAYTON CHRISTENSEN: Higher education in America has been very successful for centuries, but now things are changing because the scale and the cost is enormous. We have a product that is so expensive that a lot of people can’t pay for it, and they have to go into debt. And it just isn’t viable.

ANDY DELBANCO: The rise in student tuition is unsustainable. We cannot continue to charge significantly more, year after year after year, without running into some kind of a brick wall.

ANYA KAMENETZ: College tuition has increased more than any other good or service in the entire U.S. economy since 1978.

ANYA KAMENETZ: A lot of the older generations that criticize the millennials grew up in a time when you could go to a state university and pay your way through with summer jobs. These millennial children then got to college and realized, “Oh, the money is not there to pay for me. I’m not going to be able to graduate into a cushy job. And, in fact, everything that I was told about the way that the world works turns out not to be the case.”

AMY GOODMAN: Anya Kamenetz, who has been studying this. Andrew Rossi?

ANDREW ROSSI: Yes, Anya is somebody who really has a lot of insight to provide, along with the other commentators. And I think she also supports the notion that some students maybe should not be going to school and that there’s a stigma associated with not going to college.

AMY GOODMAN: You have a story of the PayPal chief who’s paying people not to go to college?

ANDREW ROSSI: Well, Peter Thiel is the founder of PayPal. He’s somebody who has been a sort of maverick entrepreneur. And so, he has been giving people $100,000 to drop out of college and participate in the Thiel Fellowship, a 20 Under 20 program. And it’s part of a—it has actually spawned the UnCollege program in San Francisco, which is trying to unbundle or just aggregate the college experience into different elements.

AMY GOODMAN: And explain the MOOCs.

ANDREW ROSSI: And MOOCs are a part of that. They’re massive open online courses.

ANDREW ROSSI: MOOCs. And they are driven by a handful of companies, some of which are for-profit. including Coursera and Udacity. There was one experiment that was tried on the campus of San Jose State that Governor Brown supported to provide what are known as remedial classes for some students. But because the classes were delivered exclusively online with no human component, the pass rates were abysmal. And so, the enthusiasm about MOOCs as a potential solution for the future took a hit as a result.

AARON MATÉ: Pam Brown, as we draw to a close, your comments, and what solutions do you see?

PAMELA BROWN: Well, first of all, I think that we have to change the story that we tell. Obama’s announcement was couched in the story of the American dream, how he and Michelle made it by going to college. But in reality, we know just as a factual statement that it’s low-wage jobs that are expanding, the ones that don’t require college, and high-wage jobs that do require college are actually shrinking. So, fundamentally, I think that the idea that you’ll earn an extra million dollars over the course of your lifetime is probably broken and probably doesn’t hold true. So we have to actually create a public education system in this country that’s free. And we’re also going to have to address some of the inherent issues, the way in which this crosses racial lines and really is a very racialized system and is perpetuating and increasing all sorts of inequality.

AMY GOODMAN: We have to leave it there. Pam Brown, thanks for being with us, a Ph.D. student at the New School. And thank you so much to our guest Andrew Rossi. His film is Ivory Tower. 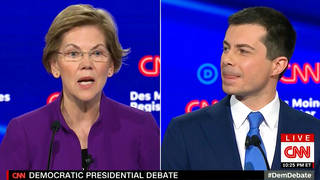