A new report finds many talking heads who have been fanning the flames of war in the news media have ties to Pentagon contractors. Reporting for The Nation, Lee Fang details how television analysts including retired generals Jack Keane and Anthony Zinni and former Department of Homeland Security official Frances Townsend have appeared on television recently, but their ties to military contractors were not disclosed. Fang writes many of these commentators “have skin in the game as paid directors and advisers to some of the largest military contractors in the world.” Keane, for example, is a special adviser to Academi, the contractor formerly known as Blackwater, and a board member to military manufacturer General Dynamics. He is also a “venture partner” to SCP Partners, an investment firm that works with defense contractors.

NERMEEN SHAIKH: We turn now to an investigative report that finds many talking heads who have been fanning the flames of war in the news media have ties to Pentagon contractors. In a piece headlined “Who’s Paying the Pro-War Pundits?” reporter Lee Fang says many of these commentators, quote, “have skin in the game as paid directors and advisers to some of the largest military contractors in the world.” Fang continues, “Ramping up America’s military presence in Iraq and directly entering the war in Syria, along with greater military spending more broadly, is a debatable solution to a complex political and sectarian conflict. But those goals do unquestionably benefit one player in this saga: America’s defense industry.”

AMY GOODMAN: The ties of pundits to Pentagon contractors who stand to profit off war are not disclosed by the media where they proffer their views. One of the worst offenders in this regard is retired General Jack Keane, who, according to the piece, has appeared on Fox News at least nine times over the last two months advocating military strikes against ISIS. Let’s go to a clip from Sunday.

JACK KEANE: I do believe that the air campaign that’s taking place in Iraq now will be expanded. But also we should expand immediately into Syria. He does not need congressional authorization for that. I’ll leave it to him whether he thinks he should get that or not, but the fact of the matter from a military perspective, we should be bombing Syria and Iraq simultaneously now.

AMY GOODMAN: That’s retired General Jack Keane, speaking on Fox News Sunday. He is introduced simply as a think tank leader and a former military official. Again, what’s not disclosed is the range of his affiliations with Pentagon contractors. Keane is a special adviser to Academi, the contractor formerly known as Blackwater, and a board member of the military contractor General Dynamics. He’s also a venture partner to SCP Partners, an investment firm that works with military contractors. Keane’s think tank has also provided data on ISIS used by The New York Times, the BBC and other major outlets.

To find out more, we go to San Francisco to speak with the author of the piece, Lee Fang. He is an investigative fellow with The Nation Institute, contributing writer at the magazine.

AMY GOODMAN: Talk about, first, General Keane and some of the other people that you have found, not—the issue is not so much who they work for, but that they are not identified as working for them when they’re brought on television.

LEE FANG: That’s right, Amy. We look at a number of prominent pundits, contributors to cable news networks, who have gone on television, appeared in the pages of different print outlets, submitted op-eds, and these individuals are only acknowledged or identified for their previous roles as officials at the State Department or former generals. Their current roles as advisers or board members to defense contractors have not been disclosed. Many of these individuals have called for an escalation in the region, arming different militant groups, calling for an increased air campaign for entering the conflict in Syria—many different military solutions to a very complex problem. But again, as you mentioned, these individuals have not—their ties to military contractors, that could benefit from these policies, have not been disclosed.

You talked a little bit about former General Jack Keane. Well, Jack Keane is the Fox News military analyst. He appears regularly on the Sunday programs and on prime-time television. And remember, Fox News is the largest cable network. They bring in over four million, sometimes 4.5 million, viewers in their prime-time news coverage. And in many cases, Keane is the only military voice, the analyst brought in to provide the military point of view, so many Americans are only getting his opinion without knowing that he works for many different defense contractors.

NERMEEN SHAIKH: Well, I want to turn to comments made by someone else whom you cite in the piece, CNN commentator Frances Townsend, who has also been calling for a tougher stance on ISIS. She previously worked in the Bush administration. Let’s go to two clips of Townsend on CNN.

FRANCES TOWNSEND: Bombing ISIS targets in Iraq is not going to be enough, because all you’re going to do is push them back into the safe haven that Syria has become. And so, we need a strategic plan to absolutely wipe out ISIS completely.

I would say this can’t just be an Iraqi operation, because if you do that, then you push ISIS into Syria, where they enjoy safe haven. So you’ve got to have a broader strategy that includes the safe have in Syria.

NERMEEN SHAIKH: That was CNN commentator Frances Townsend. Lee, can you talk about who she is and why it’s complicated that she’s saying what she is?

LEE FANG: Right, Townsend is a former Bush administration official. She’s also a contributor to CNN, meaning she’s a regular guest, appearing almost every other day in some weeks. But she’s also an adviser to several defense consulting firms. She also works at a holding company, MacAndrews & Forbes, which owns several defense contractors. One of the largest is AM General, which makes Humvees and other armored vehicles. So, obviously, this is a company—AM General, in particular—that has benefited from the war in Iraq. They’ve sold many vehicles to the government there. So, when she goes on television and discusses military action in Iraq, and in many cases solely talks about the need to increase military involvement in that region, she’s not disclosing, again, how some of her current ties to military contractors could pose a conflict of interest.

AMY GOODMAN: I want to turn to comments made by former head of CENTCOM, retired four-star general, Anthony Zinni, who has been advocating for a large deployment of U.S. troops to the region. He recently spoke to Fox News Radio following the release of the video showing U.S. journalist Steven Sotloff being beheaded.

ANTHONY ZINNI: I think, clearly, this is—this group has to be dealt with, and dealt with firmly. The atrocities they’ve committed, near genocide in some cases, the beheadings that are absolutely horrific. So I think we need to do what we are capable of to destroy especially their conventional capability they’ve taken from the Iraqis and from others in Syria and Iraq. So, I mean, I support the airstrikes. I think eventually we’re going to have to have a security assistance program in place for the Kurds and the Iraqis to make sure that they can prevent the possibility of ISIS coming back.

AMY GOODMAN: That’s General Anthony Zinni, again, advocating for more war in the Middle East. Did you call the networks, Lee Fang, to get their response to why they’re not identifying these pundits or former generals as contractors for the contractors?

LEE FANG: We reached out to several of these pundits; they did not respond. If any of the networks or the pundits do respond, we’ll certainly update the piece. But, you know, the general you just played a clip from, Anthony Zinni, is a board member to BAE Systems, one of the largest defense contractors in the world, based in the United Kingdom. What’s interesting is that last—or, earlier this month, Bank of America released a research note explaining that BAE Systems, which is a stock that slumped throughout much of this year, they’re expected to rebound because of the conflict in Iraq and Syria and in the region. So, this entire military strategy, the military escalation, certainly benefits companies like Zinni’s firm, BAE Systems.

AMY GOODMAN: Do you see a correlation between the number of people advocating for war, or should I say the lack of a antiwar response in the media, with the polls that show overwhelmingly Americans are for striking Islamic State?

LEE FANG: Well, sure. Of course, military opinion is not monolithic, but on many of these networks, you hear from a limited set of opinions. Again, for Fox News, if you watch their prime-time coverage, which is absolutely dominating it—it receives more viewers than the two biggest competitors, MSNBC and CNN, combined—you only hear from a very small set of opinions. Again, folks like retired General Jack Keane, they’re the only military experts brought on for some of these prime-time programs. And so, of course, if Americans are only hearing from a very select point of view, they aren’t hearing from a diverse array of expert opinion, that’s going to influence public opinion. And again, no one’s saying that we shouldn’t have some of these former generals speaking in the media. I think what many experts, media ethics professors and others, have called for is simply more disclosure.

AMY GOODMAN: Lee Fang, we want to thank you for being with us. A new piece in The Nation, we’ll link to, “Who’s Paying the Pro-War Pundits?”

AMY GOODMAN: This is Democracy Now! When we come back, the crisis of Ebola. We’ll be joined by Pulitzer Prize-winning journalist Laurie Garrett. Stay with us. 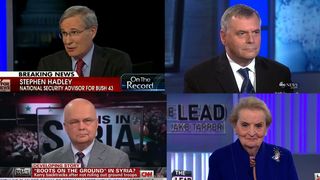