Chicago’s mayoral race is heading to a runoff election after incumbent Rahm Emanuel failed to win 50 percent of the vote. Emanuel raised roughly $16 million, more than four times his challengers combined. Could the second-place challenger, Jesús “Chuy” García, a county commissioner and former immigrant rights activist born in Mexico, defeat the man nicknamed “Mayor 1 Percent”? We are joined by Salim Muwakkil, senior editor of In These Times and host of “The Salim Muwakkil Show” on WVON in Chicago.

JUAN GONZÁLEZ: We turn to Chicago, where Mayor Rahm Emanuel failed to get more than 50 percent of the vote in Tuesday’s election and must now face off a runoff against second-place finisher Jesús “Chuy” García in April. Despite vastly outspending his four opponents and receiving an in-person endorsement from President Obama, Mayor Emanuel received only about 45 percent of the vote. Emanuel served as Obama’s first chief of staff.

AMY GOODMAN: Chuy García, who serves on the Cook County Board of Commissioners, received about 34 percent of the vote—far higher than expected. García jumped into the race last October after the teachers union president, Karen Lewis, dropped out after being diagnosed with brain cancer. García was born in Mexico. He’s a former immigrant rights activist. He addressed his supporters last night.

JESÚS ”CHUY” GARCÍA: Nobody thought we’d be here tonight. They wrote us off. They said we didn’t have a chance. They said we didn’t have any money, while they spent millions attacking us. Well, well, we’re still standing. We’re still running. And we’re going to win. We have something to say to all those big corporations and special interests who spent all those millions to install their own mayor: We want change!

MAYOR RAHM EMANUEL: Tomorrow morning, I’ll be seeing you at the L stops, as I have every morning, that skinny kid. Together as a city, we will get—

EMANUEL SUPPORTER: I’ll be there, Rahm!

MAYOR RAHM EMANUEL: I have a sinking feeling you’re right, you will be there. We will get back out there, talking to our friends and families and neighbors, as they make a critical choice about who has the strength, who has the leadership, who has the ideas to move this great city forward, so we could secure the future of this great city for our children. Thank you, and God bless you.

AMY GOODMAN: To talk more about the Chicago mayoral race, we’re joined by Salim Muwakkil. He is senior editor of In These Times, host of The Salim Muwakkil Show on WVON in Chicago.

Welcome back to Democracy Now!, Salim. The significance of Rahm Emanuel, who President Obama came out to endorse, who raised, well, what, four times the amount of money of all the candidates against him combined, him not hitting the 50 percent mark so he has to go to a runoff?

SALIM MUWAKKIL: That’s right. I mean, he was widely disliked in Chicago, and especially in the African-American—in the African-American community, some parts of the Latino community, as well. But primarily, he was seen as a candidate of privilege, a candidate who was dedicated to the development of downtown Chicago while neglecting the less privileged precincts of the city. And he was seen as someone who would continue that process of privatizing the public sphere, or the commons, privatizing the commons to the highest bidder. And I think it was simply a reaction to that attitude, and especially with the activism and organizational prowess of the Chicago Teachers Union.

His initial clash with them, I think, is what started his downward spiral in certain communities, because he had that kind of arrogant attitude, an attitude that was pro-charter schools, a sort of dismissive attitude toward the public in Chicago. And the teachers union championed that alternative and championed a lot of candidates in this contest, a lot of aldermanic candidates. They provided Chuy García with some of his seed money in order to get started. And so, I think it was, you know, a number of factors that contributed to Emanuel’s lack of—you know, of fulfilling what a lot of the media took to be kind of conventional wisdom, that he would triumph. Well, the grassroots organizing of the Chicago Teachers Union and other organized labors and community groups that got involved with Chuy’s campaign, they simply outnumbered the money. And that will happen if the passion is there.

JUAN GONZÁLEZ: Salim, I wanted to ask you, because one of the things that’s struck me, which happens repeatedly in many of these local races, is that the polls were way off on the supposed support for Chuy García. They were talking about he only had about 20 percent support. And I’m wondering, one, your sense of what happened there. And also, Karen Lewis, who was originally the head of the teachers union, was originally supposed to run, but, of course, when she got ill, she had to drop out. I’m wondering, if she had run, she might have—she might have actually beaten Emanuel in the first round.

SALIM MUWAKKIL: I mean, there’s a great possibility of that, yes. But, you know, Karen Lewis was a polarizing figure also, so she would have inspired a lot of passion, but she may have inspired just as much opposition. I think Chuy García is kind of that compromised figure who was a moderate, you know, spot between her passion, her great passion, and a sort of organizational prowess and knowledge that Chuy García possesses. And so, yes. But, you know, I think—Karen Lewis drafted Chuy García, according to his own accounts. She was the one who convinced him to get into the race. And so, she is a large part of—you know, she’s his ideological backbone, I guess you could say, or his great supporter. And he gives—you know, he certainly gives credit to her support.

And Chuy, you know, was also a very—he was a very essential part of the Harold Washington coalition back in the day. And that’s stood him in good stead, let us say, among many of the progressives, who still rally to his side. Many of the leading progressives in Chicago, black progressives, were in his camp. And I think also the candidacy of Willie Wilson and Dock Walls siphoned away some of that discontent from the black community that may have gone—may have gone to Rahm Emanuel, because there is some residual—or, you know, there’s a little bit of animosity in the African-American community toward the Latino community, primarily because of economic threats, the threat of employment replacement, that kind of thing. So there’s a little bit of that in the black community, and perhaps the candidacies of Willie Wilson and Dock Walls siphoned that out to allow, you know, a clearer kind of expression of discontent for the mayor to consolidate on Chuy García.

JUAN GONZÁLEZ: And the significance of Luis Gutiérrez, maybe the most prominent Latino leader in Chicago, not backing Chuy García, but going with Rahm Emanuel?

SALIM MUWAKKIL: Yeah, that’s another thing. You know, Chuy comes out of the progressive wing of the Latino political power in this city. And Gutiérrez represents the opposite wing, let us say. And so, there was always that tension between the two. And, you know, this is an indication that Gutiérrez really doesn’t have the support of the community behind him. He has long ago ceded his credentials, his movement credentials, to support for these kind of mainstream candidates, and he continues that dynamic. And I think he was repudiated in this election. But I’m sure he won’t get the message.

AMY GOODMAN: Salim, we want to thank you for being with us. When is the rerun? When is the runoff, I should say, in April? And what was the voter turnout? And do you think that will change?

SALIM MUWAKKIL: The voter turnout was extremely low. Estimates are that it was—and, in fact, it may have been—it may have hit a record for lack of interest. And that is something also that defies conventional wisdom. You know, the pundits said that if the turnout is low, it’s likely that Emanuel would win without the need of a runoff. But that, too, was—you know, was contradicted by the result of this election. So, we look forward to the general election, and Chuy’s chances look very good, very good.

AMY GOODMAN: Salim Muwakkil is senior editor of In These Times, host of The Salim Muwakkil Show on WVON in Chicago. This is Democracy Now!, democracynow.org, The War and Peace Report. When we come back, we’ll look at President Obama’s veto of the Keystone XL pipeline, and we’ll speak to Kumi Naidoo, the head of Greenpeace International in South Africa. Why was he being spied on? Stay with us. 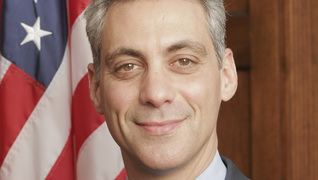