Newly released video has revealed the dying moments of an African-American active-duty soldier who checked himself into the El Paso, Texas, county jail and died while in custody nearly three years ago.

Sgt. James Brown reported to jail for a two-day sentence for driving while intoxicated. His family said Brown informed the jail he had a history of post-traumatic stress disorder after two combat tours in Iraq.

Local news station KFOX14 said they fought all the way to the Texas attorney general to obtain video of the 2012 incident. The video shows something happened which caused Brown to bleed in his cell. When he refuses to speak with guards, a team in riot gear storms in and swarms on top of him, while he repeatedly says he can’t breathe and appears not to resist. His condition deteriorates, as he is carried to an infirmary, and has a mask placed over his face.

Toward the end of the video, after Brown has said he can’t breathe at least 20 times, he is left naked in a cell, not blinking or responding, his breathing shallow. Attorneys say an ambulance was never called. Brown was eventually brought to a hospital, where he was pronounced dead. Authorities claim he died from natural causes after an autopsy report cited a “sickle cell crisis,” but his family says he died as a result of his treatment in jail. Their attorney, B.J. Crow, spoke to KFOX.

B.J. Crow: “When a 26-year-old active military person checks into jail for a court-imposed sentence on a Friday, and he leaves Sunday, you know, in a casket, something went horribly wrong there. … He was bleeding out the ears, the nose, the mouth. His kidneys shut down. His blood pressure dropped to a very dangerous level. And his liver shut down.” 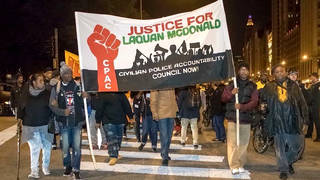