In a Democracy Now! special, we spend the hour with Noam Chomsky, the world-renowned political dissident, linguist, author and institute professor emeritus at Massachusetts Institute of Technology, where he’s taught for more than half a century. Chomsky has written more than 100 books, including his latest, “Because We Say So,” a collection of his monthly columns. On Saturday, Chomsky spoke before a sold-out audience of nearly 1,000 people at The New School’s John L. Tishman Auditorium in New York City. In a speech titled “On Power and Ideology,” he discussed the persistence of U.S. exceptionalism, Republican efforts to torpedo the Iran nuclear deal, and the normalization of U.S.-Cuba relations.

This is part one of a three-part speech. Watch Part 2 || Watch Part 3

AMY GOODMAN: Today, in a Democracy Now! special, we spend the hour with Noam Chomsky, the world-renowned political dissident, linguist, author and institute professor emeritus at the Massachusetts Institute of Technology, where he’s taught for more than half a century. Noam Chomsky has penned more than a hundred books; his newest, Because We Say So, a collection of his columns.

On Saturday, Chomsky spoke before a sold-out audience of nearly 1,000 people at The New School’s Auditorium here in New York City. Chomsky discussed the persistence of U.S. exceptionalism, Republican efforts to torpedo the Iran nuclear deal and the normalization of U.S.-Cuba relations. Professor Chomsky also explained why he believes the U.S. and its closest allies, namely Saudi Arabia and Israel, are undermining prospects for peace in the Middle East. His speech was titled “On Power and Ideology.”

NOAM CHOMSKY: The role of concentrated power in shaping the ideological framework that dominates perception, interpretation, discussion, choice of action, all of that is too familiar to require much comment. Tonight I’d like to discuss a critically important example, but first a couple of words on one of the most perceptive analysts of this process, George Orwell.

Orwell is famous for his searching and sardonic critique of the way thought is controlled by force under totalitarian dystopia. But much less known is his discussion of how similar outcomes are achieved in free societies. He’s speaking, of course, of England. And he wrote that although the country is quite free, nevertheless unpopular ideas can be suppressed without the use of force. Gave a couple of examples, provided a few words of explanation, which were to the point. One particularly pertinent comment was his observation on a quality education in the best schools, where it is instilled into you that there are certain things that it simply wouldn’t do to say—or, we may add, even to think. One reason why not much attention is paid to this essay is that it wasn’t published. It was found decades later in his unpublished papers. It was intended as the introduction to his famous Animal Farm, bitter satire of Stalinist totalitarianism. Why it wasn’t published is apparently unknown, but I think perhaps you can speculate.

Orwell’s observations on thought control under freedom come to mind in considering the raging debate today about the Iran nuclear deal, which currently occupies center stage. I should say it’s a raging debate in the United States, virtually alone. In almost everywhere else, the deal has been greeted with relief and optimism and without even a parliamentary review. This is one of the many striking examples of the famous concept of American exceptionalism.

The fact that America is an exceptional nation is regularly intoned by virtually every political figure, and, I think more revealingly, the same is true of prominent academic and public intellectuals. Can select almost at random. Take, for example, the professor of the science of government at Harvard. He’s a distinguished liberal scholar, government adviser. He’s writing in Harvard’s prestigious journal, International Security, and there he explains that unlike other countries, the “national identity” of the United States is “defined by a set of universal political and economic values,” namely “liberty, democracy, equality, private property, and markets.” So the U.S. has a solemn duty to maintain its “international primacy” for the benefit of the world. And since this is a matter of definition, we can dispense with the tedious work of empirical verification, so I won’t spend any time on that.

Or let’s turn to the leading left-liberal intellectual journal, The New York Review. There, a couple of months ago, we read from the former chair of the Carnegie Endowment for International Peace that “American contributions to international security, global economic growth, freedom, and human well-being have been so self-evidently unique and have been so clearly directed to others’ benefit that Americans have long believed that the [United States] amounts to a different kind of country.” While others push their national interest, the United States “tries to advance universal principles.” No evidence is given because it’s again a matter of definition. And it’s very easy to continue.

It’s only fair to add that there’s nothing at all exceptional about this. American exceptionalism was standard for every great power, very familiar from other imperial states in their days in the sun—Britain, France, others. And this is true, interestingly, even from very honorable figures from whom one might have expected better—so, John Stuart Mill, for example, in England, to mention a significant case—which raises interesting questions about intellectual life and intellectual standards.

Well, in some respects, American exceptionalism is not in doubt. I just mentioned one example: the current Iran nuclear deal. Now, here the exceptionalism of the United States, its isolation, is dramatic and stark. There are actually many other cases, but this is the one I’d like to think about this evening. And in fact, U.S. isolation might soon increase. The Republican organization—I hesitate to say “party”—is dedicated to undermining the deal, in interesting ways, with the kind of unanimity that one doesn’t find in political parties, though it’s familiar in such former organizations as the old Communist Party—democratic centralism, everyone has to say the same thing. That’s one of many indications that the Republicans are no longer a political party in the normal sense, despite pretensions, commentary and so on.

AMY GOODMAN: Noam Chomsky, speaking Saturday at The New School in New York. When we come back, he addresses Iran, Cuba, Saudi Arabia, Israel and the U.S. presidential elections, in a moment. 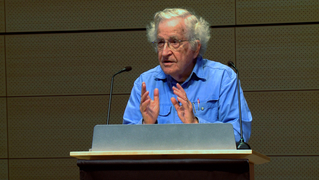