In our extended conversation with Barry Eisler, a former CIA agent turned writer, he discusses his political thrillers, most recently, “The God’s Eye View.” “There have been a lot of things I’ve written about that surprisingly turned out to be true,” Eisler says. “If you read the news … and you use your imagination, you can read between the lines in ways that will allow you to predict in somewhat depressing fashion what the government is really up to.”

Watch Part 1: Will FBI Take a Bite Out of Apple? Former CIA Agent on Showdown Between Apple & U.S. Government

AMY GOODMAN: This is Democracy Now!, democracynow.org, The War and Peace Report. I’m Amy Goodman, with Nermeen Shaikh, with Part 2 of our interview with the thriller writer, The New York Times best-selling author, Barry Eisler. His latest book is called The God’s Eye View. Now, while it is fiction, he had his own experiences within the CIA, in the covert wing of the Central Intelligence Agency, so there’s a lot here. Well, you call it, Barry, reality-based.

AMY GOODMAN: You have written a number of books, that have made it to all levels of The New York Times best-seller list. And while at the time they may have seemed speculative, so many of them have proven to be true. Talk about A Clean Kill in Tokyo, which you published, what? Like 13, 14 years ago?

AMY GOODMAN: Where you write about remotely hacking the pacemaker and so many other things. And go through A Lonely Resurrection and Fault Line and “London Twist,” how what, you deem them, might be a little futuristic actually panned out.

BARRY EISLER: Yeah, there have been a lot of things I’ve written about that, surprisingly and somewhat depressingly, have actually turned out to be true. The one about hacking a pacemaker, I did in my first book in 2002, turns out to be the case. I mentioned earlier Dick Cheney had his doctor turn the wireless accessibility feature in his pacemaker off. And there’s been a lot of—a lot of studies now about vulnerability of not just medical devices, but of cars and even airplanes, because everything is wired now.

Probably the closest I think I’ve ever come to something that turned out to be true was in my third book, which I was writing in 2004. There’s a CIA guy who’s explaining to my contract assassin, John Rain, that the government has this thing they call a list. It’s a list of terror targets, terrorist targets, that the government wants to take out. And the guy, my CIA guy, Kanozaki, says, “There’s—of course nobody calls this thing an assassination list. That would be gauche and would be hard to explain in front of some outraged congressional committee down the road. What we call it is a disposition list.” And then, a couple years ago, it turns out that the White House has Terror Tuesdays, and what they call their assassination list is the disposition matrix. I was like, “Damn! I’m even getting the—I’m almost getting the nomenclature right.” But yeah, that’s the government, right? They’re never going to call it a kill list. In fact, we don’t even do assassinations. We have “targeted killings.” There are so many words like that, that the government uses to obscure what’s really going on. You know, if we wind up making another war in Libya, it’s not going to be a war, it will just be an intervention. We never call these things what they really are. So that was another one that I was surprised to get right.

My second book, A Lonely Resurrection, published in 2003, I was talking about Tokyo Electric Power Company, TEPCO, and the kind of corruption and cover-ups they were using to conceal shoddy work on their nuclear reactors. And then, of course, there was the 2011 tsunami and meltdown at Fukushima nuclear reactor, and it turned out that, yeah, TEPCO was doing all this kind of stuff.

So, I tell people a lot of times that if you read the news, real news, closely, if you watch shows like Democracy Now! and some other good ones, and you use your imagination, you can read between the lines in ways that will allow you to predict, in somewhat depressing fashion, what the government is really up to.

AMY GOODMAN: Can you talk about facial recognition?

BARRY EISLER: Yeah. I’m no facial recognition expert, but there have been some great articles about it. Kashmir Hill in Fusion wrote about this about a year ago, and I used her article as part of my bibliography. This technology gets better and better. I mean, it’s—if you think about like speech recognition, 10 years ago, it was a little bit kludgy; now it’s really, really good. Facial recognition is the same. The biggest problem with facial recognition, as I understand it, is false positives. So it’s hard to weed those out. But the technology keeps getting more accurate.

And if you think about what will happen when facial recognition—as facial recognition technology grows increasingly robust and is paired with the government’s efforts to hack into closed-circuit television systems and all sorts of monitors, all sorts of cameras—for example, the ones on the laptops you guys have right here on your desk—you really might want to put stickies over those, over those cameras, right?—but when it gets to the point where the government has access to cameras deployed in public spaces all over the world and pairs that with facial recognition technology, we’re going to be living in a world that is reminiscent of Minority Report. And if we do wind up living in that world, as Edward Snowden was saying in a clip you played earlier, I personally don’t think that would be a good thing, but at the very least, we ought to be able to make an informed decision about that and vote on it as a democracy.

NERMEEN SHAIKH: You’ve also said that no one serves up great plots for thriller writers like the U.S. government.

NERMEEN SHAIKH: So, is the government the principal source of all of these different books that you’ve written?

BARRY EISLER: Yeah, yeah. As I say, it’s kind of depressing, again, as an American citizen, but I’m embarrassed also to admit that as a thriller writer, every time the government does some crazy thing, I’m like, “Oh, my god! My next book!” I mean, when Glenn Greenwald and Laura Poitras first started reporting on the Snowden revelations, I was like, “This is it! This is my book!” So, thank you, Edward Snowden. I mean, you helped me write a really great book.

I remember reading in 2002 when the CIA essentially took a public bow for blowing up some suspected terrorists—which the government never calls suspected terrorists, by the way; they’re always just terrorists—blowing up a car full of suspected terrorists in Yemen, including an American citizen. And that’s when I got the idea for this list. I thought, “Wow! The rules have really changed post-9/11. The government is now conducting assassinations”—sorry, targeted killings—”of people, including American citizens. No due process whatsoever, no judicial process. They must have some sort of list. Who would they want to kill? How would my guy, John Rain, get involved?” So, yeah, every time the government does a new crazy thing, it’s just like another plot for another one of my books.

AMY GOODMAN: Well, Barry Eisler, we thank you for being with us and for the latest book, The God’s Eye View, New York Times best-selling author and former CIA agent in the covert division of the CIA, Barry Eisler. This is Democracy Now! I’m Amy Goodman, with Nermeen Shaikh. 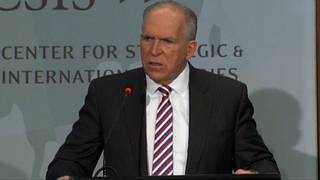