Good news or fake news? Acting Homeland Security Secretary Elaine Duke and the Trump administration defend their response to the unfolding humanitarian crisis in Puerto Rico, where many of the 3.5 million residents remain without electricity and are desperate for fresh water, food and other supplies. We speak with Laura Moscoso, a data journalist at the Puerto Rico-based Center for Investigative Journalism. She says the death toll is much higher than the government reports, noting, “Our phones have been ringing with many testimonies.”

AMY GOODMAN: We begin today’s show with the unfolding humanitarian crisis in Puerto Rico. Nine days after Hurricane Maria destroyed much of the island’s infrastructure, many of its three-and-a-half million residents remain without electricity, are desperate for fresh water, power, food and other supplies. At least 10,000 shipping containers that hold aid are stockpiled at the port, overwhelming the 4,400 U.S. military members who are scrambling to distribute to rural areas where much of the infrastructure is in shambles.

REP. NYDIA VELÁZQUEZ: Unfortunately, this administration’s response has been inexcusably slow and ineffective. … To the people who are collapsed in the airport, trying to get off the island; to those of you in houses without roofs, waiting for the power to come back, worried you are running out of drinking water; to those on the mainland who are worried about their loved ones on the island, let me say this: We’re going to keep fighting for you. Do not give up. We will not give up.

AMY GOODMAN: This comes as the Trump administration responded to pressure Thursday to waive a shipping law known as the Jones Act, that officials said was hindering disaster relief efforts for Puerto Rico. Also Thursday, acting Homeland Security Secretary Elaine Duke responded to questions from reporters about aid, about the administration’s response.

REPORTER: Are you satisfied so far with the federal response? Are you comfortable with what this government is doing?

ELAINE DUKE: I am very satisfied. I know it’s a hard storm to recover from, but the amount of progress that’s been made, and I really would appreciate any support that we get. I know it—it is really a good news story in terms of our ability to reach people and the limited number of deaths that have taken place in such a devastating hurricane.

For more, we go directly to San Juan, the capital of Puerto Rico. We’re on the phone with the government and media command center. Laura Moscoso is joining us. She’s a data journalist with the Center for Investigative Journalism, an award-winning independent media that is marking its 10th anniversary this year. They are reporting this week that the death toll is higher than the government reports.

Welcome to Democracy Now!, Laura. Talk about what you’re encountering now. And what about these figures that you believe the death toll is much higher than is being reported?

LAURA MOSCOSO: Hi, Amy. Thanks for having us in your program.

About the piece that we published yesterday about the figures and the numbers that the government is saying are the deaths caused by Maria, I can tell you that today there may be more. But the official number is 15 deaths caused by—directly caused by Maria. But since yesterday, since we published our article, our phones have been ringing with many testimonies of many people around the island, in very faraway places, telling us that in hospitals, even in their own houses, and in the emergency centers established around the island for people to get supplies, many people are dying, are still dying, and they’re not being accounted for. And we don’t—the government hasn’t been able to go down there and see that for themselves.

AMY GOODMAN: And can you talk about the stockpiling of aid at the port, what’s going on, Laura?

LAURA MOSCOSO: Yeah. I mean, me, myself, I haven’t been to the port, so I don’t have the actual image of these supplies locked on the port. But we do know that many people from outside Puerto Rico, they’ve been sending many, many, many resources and many, many, many supplies, and they haven’t reached the people that they’re supposed to. So there’s obviously a lack of distribution.

I know that there is a real and practical problem. We lost many of our roads. We lost many of our highways. And it is very difficult to carry the supplies from the ports and the airport into the rural areas of the country. Nevertheless, even in San Juan, we don’t see the movement, right? Even in the capital, where the ports are and where the airport is at, we don’t see the movement or the deployment of the federal agents that are supposed to be helping into the distribution.

AMY GOODMAN: Laura, can you talk about the state of emergency and the executive order now in place in Puerto Rico that includes—what is the curfew? From 7 p.m. to 5 a.m.? And the peace officers, who are they?

LAURA MOSCOSO: Yeah, exactly. So, 24 hours after the hurricane, we had a executive order with a curfew that went from 6:00 to 6:00, 6 p.m. to 6 a.m. Now it’s 7 p.m. to 5 [a.m.] And this executive order was—is supposed to be implemented and enforced by local police, local and municipal police. Since yesterday, that effort is now being—it has introduced the peace officers. We don’t really know the details about these peace officers. The only thing that we do know is that they are federal agents. They’re federal agents from the main island, from the U.S. And I do know that they need to have—oh, sorry, [inaudible] to do arrests, so they have to—they have to be law enforcement. But we don’t know anything else besides that, because in the executive order that the government distributed yesterday at the briefing, at the press briefing, that was the only line that talked about that new—that new executive order.

AMY GOODMAN: You have written about the isolation of mountain areas in Puerto Rico that haven’t even been gotten to. The president just appointed a three-star general to coordinate efforts right now. And President Trump is going there on Tuesday. As we wrap up, what is your response? And how are you personally doing? I know your own organization, the Center for Investigative Reporting—for Investigative Journalism, you were having trouble just reaching your other colleagues for over a week.

LAURA MOSCOSO: Yes. We are now all together, and now we are working as normally as we can. Each member has something and is struggling with something, but we are fine, comparing to the situation of other people and other municipalities in the island.

What I can tell you is this, right? For me, I’m very worried about the president’s visit to the island, because, for me, that can be a distraction from the important things that need to be happening here in Puerto Rico. As you said, we still have people that we don’t know where they are. We still have people that don’t have clean water. We still have very old people that lack tank oxygen, that lack the help in the hospital literally to survive and don’t—and that they don’t die. And now we’re going to have all these efforts for helping the people move into the security and the news coverage of President Trump, that I’m sure he’s not going to come here with water, and he’s not going to go into the rural areas to distribute water. He’s just going to be here for a few hours. But those few hours are very critical for us and for the government. And so, that’s like—that’s very controversial for me.

AMY GOODMAN: And finally, the lifting of the Jones Act, Laura Moscoso, the significance of ships being able to come in?

LAURA MOSCOSO: Well, I mean, since the beginning, and because we are very close by to Cuba, to República Dominicana and to other islands in the Caribbean and to other countries in South America, and we do have contact with them in educational efforts and in other situations—right?—not when we are in crisis, it is very normal that we reach each other and that we try to help. And because of the Jones Act and because of other restrictions, this has not happened. And now we have a 10-day waiver. I don’t think the 10-day waiver is enough, because it’s been 10 days since the hurricane, and we are still at the same space as if the hurricane was yesterday. So, I am grateful that this is happening, and I’m grateful that other people and other countries can come and help, including foreign journalists that can come here and narrate the situation from their perspective, but I think that a lot more has to be done.

AMY GOODMAN: Finally, this news coming in in the past few days: The Navy said it would deploy the USNS Comfort for Puerto Rico, a massive ship with a thousand hospital beds, operating rooms, desalinization plant—announcement coming more than a week after Hurricane Maria struck and only after more than 270,000 people petitioned for its deployment. We have 10 seconds, Laura.

LAURA MOSCOSO: Well, I mean, they’re saying a lot of things. And honestly, we are not seeing them in the island. And as I told you, for them, it’s going to be very difficult to get around the island, because they don’t know it. So, the help, even if it’s coming when it needs to come, I don’t know how good it’s going to be.

AMY GOODMAN: Well, Laura Moscoso, I want to thank you for being with us. Please be safe.

AMY GOODMAN: We want to be in touch with you next week, data journalist at the Puerto Rico-based Center for Investigative Journalism. She’s actually at the command center in San Juan right now.

This is Democracy Now! For the rest of the hour, we will be speaking with the Academy Award-winning filmmaker Michael Moore. Stay tuned.

AMY GOODMAN: “Rican Beach” by Alynda Segarra of Hurray for the Riff Raff, here on Democracy Now!, her family from, yes, the island of Puerto Rico.

Michael Moore on His Broadway Show, “The Terms of My Surrender,” Trump, Puerto Rico & the Media

NEXTMichael Moore on His Broadway Show, “The Terms of My Surrender,” Trump, Puerto Rico & the Media 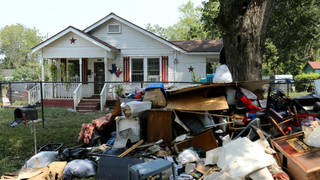