On Monday, indigenous activists from the Brazilian, Colombian and Ecuadorian Amazon rallied outside the COP25 venue to protest the targeting of indigenous forest protectors and the destruction of their lands, known as the “lungs of the Earth.” Their protest came just days after two indigenous chiefs, Firmino Prexede Guajajara and Raimundo Guajajara, were gunned down in a drive-by shooting Saturday in Brazil.

StoryDec 09, 2019Indigenous Leader Sônia Guajajara: The Amazon Is Burning & Its Defenders Are Being Assassinated

AMY GOODMAN: This is Democracy Now!, democracynow.org, The War and Peace Report. I’m Amy Goodman. We’re broadcasting from inside the U.N. Climate Change Conference, the U.N. climate summit, here in Madrid, Spain. I’m Amy Goodman. On Monday, indigenous activists from the Brazilian and Ecuadorian Amazon rallied outside this COP25 venue to protest the assassination of indigenous forest protectors and the destruction of their lands, known as the “lungs of the Earth.” Their protest came just two days after two indigenous chiefs, Firmino Prexede Guajajara and Raimundo Guajajara, were gunned down in a drive-by shooting Saturday in Brazil.

DAIARA TUKANO: I’m Daiara Tukano from the Tukano people from Brazil in the border between Brazil, Colombia and Venezuela. And we are here at the climate conference with a Extinction Rebellion group and many other climate justice movements, pleading for the survival and the support to indigenous peoples that are the guardians of the forest and are the first ones to be attacked in this moment of genocide and ecocide that we are living. Brazil is one of the countries that kills the most of nature protectors and climate activists in the world, and many of them are indigenous nations, because our territories are those that protect more than 80% of biodiversity in the world.

HELENA GUALINGA: My name is Helena Gualinga. I’m 17 years old, and I’m from the Ecuadorian Amazon. So, my community has been fighting oil since forever, as long as I can remember. And I grew up during this process of fight, and my people has been fighting this for such a long time. And that has made me part of this movement. And I think that it’s my responsibility as a young person and as an indigenous youth to make the people of the Amazon, their voices heard in spaces like this.

PROTESTERS: Tell me, can you hear us getting stronger by the hour? Power! People!

LEO CERDA: We just finished the press conference, and we’re going to take action now. We’re doing a civil disobedience with groups from the North and the South.

LAURA GOTTESDIENER: Here you can see there’s two lines of activists from Extinction Rebellion from the Global North. And they have said that they’re putting their bodies on the line, that they’re risking arrest in order to be in solidarity with indigenous people who put their bodies on the line every day. We spoke to many of these Extinction Rebellion activists earlier while they were blocking the road right next to the press conference of these Brazilian indigenous activists.

ELAINE: My name is Elaine. I’m from Extinction Rebellion Belgium. We are now in front of the COP25, where it is all happening, sitting down on the road, blocking the traffic. That’s what we are doing, especially to support the indigenous people in the Amazon that are suffering a lot from the way that we live, that we all live, and that needs to change.

ALBERTO: I’m Alberto. I’m from Nice. And we are fighting for life, literally, because we are seeing that biodiversity is being lost. We are losing more than 200 species of animals and plants every day. And the risk is that the next ones will be us.

ALEX: I’m Alex. I’m from California. We are here sacrificing our bodies, as the bodies of indigenous people have been sacrificed and abused for centuries. It’s our turn to take a sacrifice. It’s what everyone needs to do.

CARRIE: I am Carrie. I’m from the U.K. And we’re blocking this road to support the indigenous people. And I’m personally doing it for my children, because time — this is our last chance now. This is our last chance, and we need to stand up for these people and those people who died in the Amazon and for our children.

LAURA GOTTESDIENER: And how old are your children?

CARRIE: My children are 4 and 6 years old. And I want them to have a future on this planet, and I want it to be livable for them.

SÔNIA GUAJAJARA: [translated] I’m Sônia Guajajara. I am from the state of Maranhão in Brazil. I am the executive director of the Indigenous Peoples’ Articulation of Brazil. In Brazil at the moment, it’s very hard to live as an indigenous person. For the legal certification of logging and mining and agribusinesses that are destroying the Amazon, in 35 days there have been three killings. This is a direct result of Bolsonaro’s direct policies that are threatening the indigenous lives in Brazil.

LAURA GOTTESDIENER: Three of your family members have already been murdered. Are you afraid for your own life?

SÔNIA GUAJAJARA: [translated] Bolsonaro’s government is threatening all of the — all of our lives are at risk right now. But that doesn’t mean that we will stop fighting and fighting for the lives of our people.

AMY GOODMAN: And that was Sônia Guajajara, indigenous leader from Brazil, whose two relatives were assassinated on Saturday. 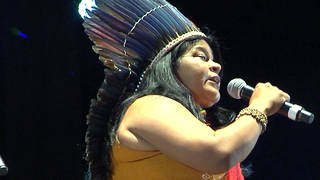 Indigenous Leader Sônia Guajajara: The Amazon Is Burning & Its Defenders Are Being Assassinated