As Yemen faces the world’s worst humanitarian crisis, a major new report has been released documenting the role that the U.S. and Europe have played in the deaths of hundreds of civilians in the Saudi- and UAE-led war on Yemen. A group of organizations, including a Yemen-based human rights organization, released the damning report on Wednesday, claiming that between April 2015 and April 2018, 27 coalition attacks killed at least 203 civilians and injured at least 749 people. The report found that 22 of the attacks likely involved weapons produced in the United States. The other five attacks were carried out either with weapons produced in the United Kingdom or with parts produced in both the U.S. and the UK. We speak with Ruhan Nagra, the executive director of the University Network for Human Rights, and Radhya Al-Mutawakel, chairperson of the Mwatana Organization for Human Rights. They are co-authors of “Day of Judgment: The Role of the US and Europe in Civilian Death, Destruction, and Trauma in Yemen.”

NERMEEN SHAIKH: As Yemen faces the world’s worst humanitarian crisis, we turn now to a major new report documenting the role that the U.S. and Europe have played in the deaths of hundreds of civilians in the U.S.-backed, Saudi- and UAE-led war on Yemen. A group of organizations, including a Yemen-based human rights group, released the damning report on Wednesday, claiming that between April 2015 and April 2018, 27 coalition attacks killed at least 203 civilians and injured at least 749 people. The report found that 22 of the attacks likely involved weapons produced in the United States. The other five attacks were carried out with weapons either produced in the United Kingdom or with parts produced in both the U.S. and the U.K. Radhya Al-Mutawakel, the chair of Mwatana for Human Rights, the Yemeni group that helped write the report, testified Wednesday before a House subcommittee on the report’s findings.

RADHYA AL-MUTAWAKEL: Mwatana has documented hundreds of attacks, killing and maiming thousands of civilians and destroying key infrastructure. We found U.S. bomb remnants at dozens of these airstrikes. Many are likely war crimes. Every single one destroyed innocent lives. The 2016 Saudi bombing of a Sana’a funeral hall, using U.S. munitions, killing and maiming hundreds, should have been a turning point. Congress should have stopped arms sales until unlawful attacks ended and war criminals were held accountable. And instead, the U.S. accepted Saudi and Emirati promises to end violations and investigate. Two years later, there has been no accountability, and airstrikes on Yemeni civilians continue.

AMY GOODMAN: The human rights group that Radhya Al-Mutawakel represents documented 128 apparently unlawful coalition airstrikes in 2018 that killed 418 civilians, including 181 children. During this time, they also observed armed Houthi rebels commit violations against Yemeni people, including laying landmines, shelling civilians, arbitrarily detaining scores of people. The report warns, “Despite ongoing Coalition abuses, the US continues to sell Saudi Arabia and the UAE weapons for use in Yemen, in violation of domestic and international law. The UK, too, continues arms sales in violation of its obligations under the Arms Trade Treaty and EU Common Position on military exports.”

Well, for more, we are joined by Radhya Al-Mutawakel, chairperson of Mwatana Organization for Human Rights, one of the groups that published the report. It’s titled “Day of Judgment: The Role of the US and Europe in Civilian Death, Destruction, and Trauma in Yemen.”

Welcome to Democracy Now! Can you start off, Radhya, by telling us the message you conveyed to Congress yesterday? What is most important for us to understand about your country, Yemen, where you live in the capital, Sana’a?

RADHYA AL-MUTAWAKEL: First, I wanted the Congress to know that they can change the fate of Yemenis. They can play a very positive role to end the war. But instead of this, they are supporting Saudis and Emiratis blindly, not only by selling weapons, but also by military and political support. So I wanted them just to try to shift this and to play a positive role to end the war in Yemen, which is very possible. It just needs a will from the Congress and the international community in general.

NERMEEN SHAIKH: Well, Radhya, can you say—talk about some of the questions that you were asked during the hearing? And also, you live in Yemen. Were you able to convey to them, the congressmembers who were present at the hearing, what conditions there are like?

RADHYA AL-MUTAWAKEL: Well, Yemenis, they are surrounded by death every day, not only by the Saudi and Emirati airstrikes—it’s one very important thing—but the death is much more than this, on Yemenis. And it is a very preventable war. So, Yemenis, they feel sad, because they feel that they are dying because of nothing, and this just can stop anytime. Millions of Yemenis now are not receiving their salaries. And in some areas, they are controlled by the armed groups, which is called Houthis, in a very difficult situation. But also in the areas that is controlled by Hadi government and the coalition, people are just living in a very bad situation and facing a lot of violations. And the war, it’s just empowering fanatic groups in Yemen, just with no view. There is no peace plan, no war plan, by parties to the conflict in Yemen.

RADHYA AL-MUTAWAKEL: So, Yemenis now, they know that U.S. are involved negatively in the war in Yemen. And in the cases we have documented, and we found U.S. remnants, weapons. Yemenis, many Yemenis, they have never been to America. But what is really sad, that America reached them through the weapons that destroys their lives and killed their families. America should reach Yemenis with education, with technology, positive one, not with weapons. But what’s happening, that they are receiving America like just weapons.

NERMEEN SHAIKH: Well, I’d like to bring Ruhan Nagra into the conversation to talk about one of the incidents that the report documents. In April 2018, a coalition airstrike tore through a wedding party, killing at least 21 people in the Bani Qais district in northern Yemen. The bride was also among those killed. Almost 60 children were injured. At the scene of the bombing, one man lashed out at Saudi Arabia.

UNIDENTIFIED: [translated] They always target weddings. They kill children and innocent people. But we can only complain to God, not to any human rights or any country in the world.

AMY GOODMAN: We are also joined now by Ruhan Nagra, executive director of the University Network for Human Rights and co-author of this new report, which found that the bomb used in this attack on the wedding party was U.S.-made. The mother of the groom is cited in the report as saying, quote, “The blood was everywhere. Fingers and intestines were in all directions. Body parts were on trees and rocks, and people tried to collect as many of them as possible, and the remaining body parts were eaten by dogs,” the report says. What kind of bomb, Ruhan, was used in this attack? It was a U.S. bomb. How common were these incidents? And how were you able to confirm the origins of the bomb?

And in this particular incident, there was a joyous wedding celebration happening. There were about 150 to 200 wedding guests gathered. There were dancers dancing. There were drummers drumming. And all of a sudden, this U.S.-made bomb explodes on the scene and wreaks utter devastation. The mother of the groom, who you cited, also said that after the attack she collected the garlands, made of jasmine flowers, that some of the guests had been wearing, and those garlands were mingled with human flesh and blood. Another guest described collecting body parts from the multiple people who were killed, and burying them and not knowing which body part belonged to whom.

So, this incident very much speaks to the pattern of U.S. involvement in unlawful coalition airstrikes that we’ve documented in this report. Of the 27 attacks documented, all but two of them involved likely U.S.-made weapons. There’s been a lot of talk in recent years, in the last couple of years, about the risk of U.S. weapons being used unlawfully in Yemen. This report presents the most comprehensive evidence to date that this is not a hypothetical risk, that U.S. weapons are actually being used in apparently unlawful collision airstrikes in Yemen.

RUHAN NAGRA: Yes. So, yes, that’s exactly right. In five of the 27 attacks we documented, U.S. cluster munitions were used. These are highly lethal weapons. There’s a growing international consensus around a ban on cluster munitions, as exemplified by the Convention on Cluster Munitions. Unfortunately, the U.S. is not a party to that convention; however, U.S. transfer of cluster munitions to Saudi Arabia and the UAE is still unlawful under U.S.—under U.S. domestic policies on cluster munition exports.

Cluster munitions are inherently indiscriminate weapons. It is extremely difficult, if not impossible, for cluster munitions to be used in compliance with international humanitarian law. That’s because they release submunitions which disperse widely and with indiscriminate effects. Some of them release submunitions over an area that spans about five football fields. So it’s virtually impossible to constrain the effects that these weapons have, especially when they’re used in populated areas.

And in the five attacks that we documented in this report where—in which cluster munitions were used, they were all used in populated areas, where high civilian casualties were an extremely likely outcome. Just to give you one example of the five, a U.S.-made cluster munition was dropped on a civilian household in one of the strikes we documented. Twenty-two people were killed. Twenty-two civilians were killed. Half of them were children. One of those—one of the children who was injured in the attack was a 10-year-old boy named Ahmad Mansour. He lost his mother and all of his siblings in that attack. So, if you can just imagine a 10-year old boy with no mother, with no brothers and sisters, all at the hands of a U.S.-made cluster weapon that should never have been manufactured in the first place, let alone then sold to a brutal, murderous regime with an horrendous human rights record.

AMY GOODMAN: We’re going to break and come back to this discussion, Ruhan Nagra with us, and Radhya Al-Mutawakel, who testified before Congress yesterday. Their report is “Day of Judgment: The Role of the US and Europe in Civilian Death, Destruction, and Trauma in Yemen.” Bill Hartung will also join us about his report on weapons being used to kill the people of Yemen. Stay with us.

NEXTU.S. Has Supplied UAE $27B in Arms Despite Nation’s Links to Torture, Mercenaries & Child Soldiers 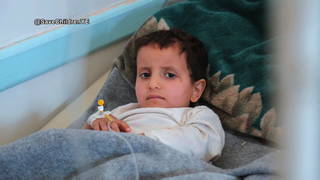