Dr. Martin Luther King, Jr and Singer Joan Baez in a Special On Civil Disobedience: Baez Recalls When King Visited Her in Prison, and We Play a Rare Recording of King’s Remarks

A secret appeals court yesterday granted the Bush administration broad new powers to conduct wiretaps and surveillance of Americans and others suspected of being spies or terrorists in the United States. It was a major victory for Attorney General John Aschroft, who immediately announced the government will greatly expand the use of the special intelligence court to obtain more wiretaps of people suspected of involvement with terrorists.

The New York Times reported on Sunday the Bush administration has begun to monitor thousands of Iraqi-Americans and Iraqi citizens in the US who are attending US universities or working at private corporations. In the event of a US invasion of Iraq, authorities will arrest and detain Iraqis or Iraq sympathizers if they are believed to be planning domestic terrorist operations.

Brooklyn immigrants rights activist Bobby Khan says Pakistani immigrants are being arrested and deported at a rate of three per day. This is in the New York City area alone.

“If the Homeland Security Act is not amended before passage, here is what will happen to you:

“Every purchase you make with a credit card, every magazine subscription you buy and medical prescription you fill, every Web site you visit and e-mail you send or receive, every academic grade you receive, every bank deposit you make, every trip you book and every event you attend — all these transactions and communications will go into what the Defense Department describes as “a virtual, centralized grand database.” To this computerized dossier on your private life from commercial sources, add every piece of information that government has about you — passport application, driver’s license and bridge toll records, judicial and divorce records, complaints from nosy neighbors to the F.B.I., your lifetime paper trail plus the latest hidden camera surveillance — and you have the supersnoop’s dream: a “Total Information Awareness” about every U.S. citizen.”

Well today we thought we’d go back in time. Never before has it been so crucial to remember voices of dissent.

We start with an impromptu speech and press conference he gave outside the Santa Rita Rehabilitation Center in California. He traveled there to visit the famous singer and activist Joan Baez. Baez had been imprisoned for blocking the entrance to the Armed Forces Induction Center in Oakland. After spending over an hour with Baez, King came outside and was met by a couple of hundred supporters. A Pacifica radio journalist recorded his remarks, and we’re going to hear them in a few minutes. But first, we thought we’d talk to Joan Baez herself. We spoke with her yesterday and asked her to describe the day she was visited by Martin Luther King Jr. in prison.

The original content of this program is licensed under a Creative Commons Attribution-Noncommercial-No Derivative Works 3.0 United States License. Please attribute legal copies of this work to democracynow.org. Some of the work(s) that this program incorporates, however, may be separately licensed. For further information or additional permissions, contact us.
NEXT“But If Not”: Dr. Martin Luther King Gives a Sermon On Civil Disobedience in a Rare Recording 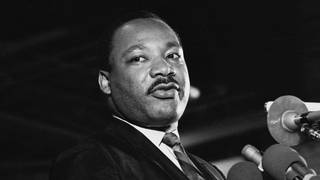