As “Black Hawk Down” Director Ridley Scott Is Nominated for An Oscar, An Actor in the Filmspeaks Out Against Its Pro-War Message

It was announced yesterday that Ridley Scott was nominated for “best director” in the Oscars. And the film is still in the top ten movies on the charts in the US and Europe. Mark Bowden’s book Black Hawk Down, which the film is based on, is number one on the New York Times paperback bestseller list this week. The book has been on the bestseller list for 26 weeks.

Originally intended to open in March, Black Hawk Down was rushed forward to January in the US and Europe, as threats of the US invading Somalia loomed on the horizon. The movie, set during the 1993 US invasion of Somalia, presents the mission as humanitarian< — >as did the Clinton administration. But when US forces dropped into a teeming market in Mogadishu on October 3, 1993, 18 US soldiers, and over a thousand Somalis, were killed. President Clinton called the massacre one of the darkest hours of his administration.

While the film’s producers say the release was timed to make the film eligible for the next Academy Awards, many say that the events of September 11 and the US military interest in Somalia had something to do with it. All actors had extensive prior training with the forces they were portraying, many who are now stationed in Afghanistan. For $3 million and script approval, the US Department of Defense gave director Ridley Scott its full support. “They saw this as a recruitment film,” says Scott.

But not everyone agrees with the film’s message, including one of the actors. We are joined today by Brendan Sexton, an actor from Black Hawk Down who gets killed by a missile early on in the film. He spoke an anti-war forum at Columbia University organized by the People for Peace Coalition last week.

StoryOct 10, 2022Remembering Indigenous Actress Sacheen Littlefeather, Who Was Mocked & Threatened at Oscars in 1973 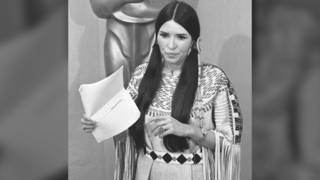 Remembering Indigenous Actress Sacheen Littlefeather, Who Was Mocked & Threatened at Oscars in 1973