On Saturday, Jane Fonda took part in her first antiwar protest since the Vietnam War. “I haven’t spoken at an antiwar rally for 34 years,” Fonda said. “But silence is no longer an option.” Meanwhile, actor Tim Robbins called for the impeachment of President Bush. [includes rush transcript]

JANE FONDA: I’m really here because I want to thank you all. I want to thank you from the bottom of my heart for being here today. So many of you, so many of today’s speakers, including my fellow actors up here, were here at the beginning, before we went into Iraq, because you knew and they knew what was in store. Thank you so much for the courage to stand up against this mean-spirited, vengeful administration. Your actions are proof that the most precious part of this country, its soul, is alive and well. So thank you. Your ongoing commitment to ending this war allows people in other parts of the world to remain hopeful that America has the stuff to become again a country that they can love and respect. Thank you. I especially want to thank and acknowledge the servicemen and women and the military families and Gold Star mothers that are here.

A lot of press people have been asking me today, “What’s the difference between now and during the Vietnam War?” And I’ll tell you one huge crucial difference: It took six years for Vietnam veterans, active-duty servicemen, Gold Star mothers and military families to come out against the war. It has happened now within three years of the war. Their presence here is critical, and we should acknowledge their courage.

I haven’t spoken at an antiwar rally in 34 years, because I’ve been afraid that because of the lies that have been and continue to be spread about me and that war, that they would be used to hurt this new antiwar movement, but silence is no longer an option. My daughter, who is here with me today — come here — she was a little girl when she would come with me to the anti-Vietnam War protests. She’s here today with her two little children, my grandchildren. I’m very proud that they’re here, but I’m so sad that we still have to do this; that we did not learn the lessons from the Vietnam War; that we’ve made the same mistakes, blindness to the realities on the ground, hubris and arrogance in dealing with a people and culture far older than we are; and that we understand so little, carelessness and thoughtlessness in our approach to rebuilding a country we’ve destroyed, allowing billions of dollars to be stolen, squandered at the hands of private contractors, just as this administration has done in our own gulf in the post-Katrina era.

So, thank you. Thank you for being here, and we’ll continue to be here for as long as necessary. God bless.

SUSAN SARANDON: “Imagine you are in constant danger from hidden roadside bombs and exposed to ambushes and sniper fire. Imagine that your home is constantly harassed with mortar explosions and rocket attacks while you try to sleep. Imagine you witness your closest friend being torn apart by enemy fire. Imagine you discover that the person you thought was an insurgent that you killed turns out to be an innocent child or someone who looks similar to your mother. Now imagine you lost a limb, you lost your eyesight, you lost a friend, you lost your sanity and you lost your innocence for an unappreciative society and an unconcerned elected government.” This is the testimony of Garrett Reppenhagen, who spoke earlier, cavalry scout and sniper in the U.S. Army First Division from 2004 to 2005.

He continues: “I didn’t expect to come home to find there’s no plan for addressing the needs of veterans like myself. I don’t understand how, despite being in the middle of not one but two wars, our government is actually scaling back on services that are critical for men and women trying to re-enter civilian society.”

Here are some staggering facts. One in three homeless Americans are military vets, and that is rising. One in four vets with PTSD sought medical care from the VA, where they experienced a two- to three-month wait to see a doctor. Over 53,000 are wounded. The ratio of doctors to patients is one doctor for every 500 patients. Veteran males aged 20 to 24 have twice the unemployment rate. Forty percent of troops currently being rotated are National Guard or reservists; 95 percent of them are experiencing problems getting their pay. Many are being sent back are on potent antidepressants, anti-anxiety drugs, with little or no counseling or supervision or screening. Over 200 have committed suicide. There’s a 70 percent divorce rate for returning soldiers. The GOP plan for 2007 drops $65 billion in benefits over the next five years.

There was not a mention of this crisis in the State of the Union address, as if the war only exists over there and not here. And there was not an ounce of criticism from any of our presidential hopefuls. I say to those who tell me that we are fighting this war over there so that it doesn’t come here: Listen to the sons and daughters who are returning and their families, and you will know that the war is being fought here in the hearts and minds and bodies of those that are returning and have already sacrificed so much. Shame on you! We are here today to say it is time to remove the burden of the political crisis of the Iraq War from our soldiers and commit to caring for a new generation of Americans who are grieving, severely wounded and mentally troubled. Thank you.

TIM ROBBINS: I don’t know if you heard the most recent news, just came over the wire: Karl Rove has been subpoenaed. Some have said recently that impeachment is off the table.

TIM ROBBINS: What was that?

TIM ROBBINS: On the train coming down here today, I talked to a young woman whose brother has just been deployed. Due to the recent Bush escalation, her brother is being rushed into action. Instead of the proper 12-week training period, this young 20-year-old serviceman will hit the ground in a hostile land with two weeks’ training. Is impeachment still off the table?

TIM ROBBINS: This past November, the American people sent a resounding message to Washington, D.C., and the world: We want change. We want this war to end. And how did Bush respond? Twenty-one thousand five hundred more will risk their lives for his misguided war. Is impeachment still off the table?

This god seems to be giving George a pass on stealing, stealing the resources of the Iraqi people, on squandering the hard-earned tax dollars of United States citizens for an unnecessary war! Money that could be used to intelligently fight against terrorism is squandered in a way and in a war that creates more terrorists. Money that could be helping the elderly, the poor, the infirm here at home is instead lining the pockets of war profiteers from Halliburton and private mercenary militias like Blackwater. But George’s god says, “That’s cool, George.” His god tells him to honor his father and mother, but when his father tells him not to occupy Iraq, George’s god counsels him to ignore his father. 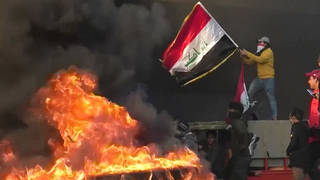