A Look at the Forces Behind the Anti-Immigrant Movement

We take a look at the forces behind the anti-immigrant movement with journalist Max Blumenthal of The Nation. Blumenthal says the ideas for the movement “did not come from a vacuum, and they’re not necessarily a rational response to a crisis. They come from the white nationalist movement, a movement that seeks to maintain what they consider the white character of the United States.” [includes rush transcript]

StoryAug 06, 2019“Fascism Will Not Go Away by Itself”: George Ciccariello-Maher on Confronting White Supremacy

AMY GOODMAN: We turn now to look at voices taking on the immigrants’ rights movement, from voices behind the immigrants’ rights movement to those against them. Our next guest has been closely following the activities of anti-immigrant rights groups in the United States. Max Blumenthal is a Puffin Foundation writing fellow at The Nation Institute — his work has appeared in The Nation and Salon, The American Prospect and The Washington Monthly — joining us in the firehouse studio.

How are people organizing against immigrants in this country?

MAX BLUMENTHAL: Well, there are several components of the anti-immigrant movement in this country, and they’re all working very closely together. They have a longstanding program to forcibly remove the 12 million undocumented immigrants in this country, and they’re specifically targeting brown-skinned immigrants, people who come from the Third World. That’s what their target is. So they’re actually not a xenophobic movement. They’re a nativist movement. I’ll get into that in a second.

At the top of this movement, you have politicians like Tom Tancredo, Republican representative from Colorado who’s running on the Republican ticket. He’s not going to get a lot of votes, but what he’s done is —

MAX BLUMENTHAL: Running for president. He’s effectively shaped the contours of the political debate. His campaign serves as a platform for the anti-immigrant movement, and he has several allies in Congress, like Dana Rohrabacher, the Republican congressman from California, who advanced the, you know, far-right rhetoric of the anti-immigrant fringe on the House floor. They’ve effectively mainstreamed stuff that was considered out of bounds a generation ago.

And they’ve also shaped the way the Democrats treat immigration. Joe Biden, the Democratic senator from Delaware who’s running for president, has endorsed the idea — to my knowledge, he’s endorsed the idea of a wall along the U.S.-Mexico border. This is an idea that the anti-immigrant movement came up with to keep out what they consider to be the barbarian hoards. It’s a patently un-American idea.

The ideas of the anti-immigrant movement come from a network of think tanks in Washington and across the country, which were founded and funded by a guy named John Tanton, who is an ophthalmologist from Michigan who came out of the Sierra Club. He believes the greatest danger to civilization is population growth, and he holds immigrants — specifically immigrants from Latin America and Africa — responsible for population growth. And this is a guy who’s a white nationalist. He’s founded organizations like the Federation for American Immigration Reform, which is the largest anti-immigrant think tank, Center for Immigration Studies. You know, you’ll see their facts cited in newspapers in the mainstream press.

And in the early ’90s when the anti-immigrant movement was trying to back Prop 187 in California, a ballot measure to restrict services to immigrants there, John Tanton took $1.3 million — the Federation for American Immigration Reform, FAIR, took $1.3 million from the Pioneer Fund, a group that advanced Nazi propaganda in the 1930s and which exists to fund the science of Hitlerian eugenics. This was a huge scandal, and John Tanton was sort of forced to retreat into the dark.

But, you know, so, right now what he’s doing is he’s deployed several activists to go on TV, to go on sympathetic shows like Lou Dobbs, while he kind of puppeteers the movement. He’s funding sympathetic candidates like Tom Tancredo, but also like left-wing darling and right-wing savior Ralph Nader, who’s taken thousands of dollars from John Tanton.

Then you have the media. You have people like Lou Dobbs, who works very closely with Tom Tancredo’s office, who works closely with these think tanks, and he advances extreme conspiracy theories, like the idea of a North American Union, which came from the far shores of the right, from groups like the John Birch Society. And Lou Dobbs and the Washington Times, another sympathetic outlet, have made an enormous impact, and they’ve managed to shape the debate, as well. You see these ideas advanced in the mainstream press, in newspapers like The Washington Post and The New York Times.

Now, a point I want to make about this movement is that their ideas did not come from a vacuum, and they’re not necessarily a rational response to a crisis. They come from the white nationalist movement, a movement that seeks to maintain what they consider the white character of the United States. You know, in 2005 I attended the largest white nationalist conference, the American Renaissance Conference. After passing through an FBI cordon, I met in the lobby with David Duke, the former Ku Klux Klan leader, who, you know, for all his flaws, is a master of PR. And we talked about his days in the late ’70s trying to, you know, refine the image of the Ku Klux Klan. And he said, “You know, people called me crazy then for what I said about immigration, but I sound like every Republican today, and a lot of Democrats, and no one gives me any credit for that. And not only that, I conducted the first civilian border patrol.” Indeed, in 1979 David Duke drove around in a car marked “Klan Border Watch” looking for undocumented immigrants on the border, and he was pursued by about 40 reporters.

This was an enormous PR coup for the Ku Klux Klan, and it’s been copied by grassroots pressure groups like the Minutemen, who — they’re adopting specifically a white nationalist strategy from the Ku Klux Klan, and they’re working closely with these think tanks which I just mentioned and the politicians who I just mentioned, and they have moved from the border to towns nearby, like Hempstead, and what they’re doing is carrying out protests and vigilante action against day laborers. And this movement is growing more extreme at the grassroots, at the same time more influential in the mainstream.

AMY GOODMAN: Max Blumenthal, I read in the headlines a story that’s gotten very little attention: in Alabama, federal authorities revealing they have broken up a militia plot to attack a group of Mexicans living in a small town north of Birmingham. Last week, six members of the Alabama Free Militia were arrested in a series of raids. The Birmingham News reported police uncovered truckloads of explosives and weapons, including 130 grenades, an improvised rocket launcher, 2,500 rounds of ammunition. The men appeared in court on Tuesday. But despite the violent plot, police did not accuse them of terrorism. Instead, police charged them with conspiracy to make a firearm, which carries a maximum penalty of five years in prison and a quarter-of-a-million-dollar fine. The Anti-Defamation League says the weapons seizure was the largest in the South in years. Do you know about this group?

MAX BLUMENTHAL: Well, I’m really glad you brought that up. You know, I don’t know about this group in specific, but I think what we can extrapolate from this story is that the extreme right, militia groups, neo-Nazi groups, groups who should be considered domestic terrorists, see the anti-immigrant movement as their vehicle.

And, you know, there was an interesting, you know, story I noticed in 2000. The Michigan Militia effectively disbanded. This had the largest amount of members during the 1990s, during the heyday of the so-called anti-government militia movement. You know, they organized against Bill Clinton. Waco was their fantasy of black helicopters descending into their communities taking their guns away. And all the sudden they just disappeared. Where did they go?

The head of the Michigan Militia was interviewed, and he said, “Well, a lot of our guys like what’s going on now with the Republicans in power, and, you know, we’re looking to get into government, and we’re looking to support, you know, more mainstream causes, because they’re becoming more influential.” So you see an enormous cross-pollination between the membership rolls of the anti-government, domestic terrorist militias of the '90s and groups like the Minutemen. So that's what’s going on here.

And I think what we need to look out for, as the likelihood of a Democratic majority in government is very reasonable, you’re going to see a more extreme posture from these groups. Just imagine the scenario if Hillary Clinton in power, the perfect boogeyman for the anti-government right, a Democratic Congress, you’re going to see them growing more and more extreme. And at the same time —

AMY GOODMAN: We’ve just passed the anniversary of the blowing up of the Oklahoma City building.

MAX BLUMENTHAL: Right. And at the same time, you’re going to see, you know, more vigilante action against immigrants. And, you know, it’s unfortunate that the government is not treating this as the threat that it is. They’re not treating it as domestic terrorism. Obviously, if these characters in Alabama were Arab Muslims, they would be on their way to some secret prison in Eastern Europe wearing diapers in a Learjet, ready to get waterboarded. But instead, you know, you’ve got a totally — they’re treated totally differently, and their ideas are advanced on shows like Lou Dobbs, which come on during dinner time.

AMY GOODMAN: I want to leave it there. Max Blumenthal, thanks for joining us, Puffin Foundation writing fellow at The Nation Institute. 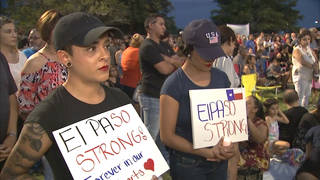 “Fascism Will Not Go Away by Itself”: George Ciccariello-Maher on Confronting White Supremacy