Voters in twenty-four states across the country took to the polls in a day that many had once predicted would determine the Democratic and Republican presidential nominees. While John McCain has proclaimed himself the Republican frontrunner, the Democratic race remains deadlocked. [includes rush transcript]

StoryDec 13, 2017No Moore! Doug Jones Rides GOP Storm to Senate in Victory That Could Add Momentum to #MeToo Movement

AMY GOODMAN: We turn now to Super Tuesday. Voters in twenty-four states across the country took to the polls in a day that many had once predicted would determine the Democratic and Republican presidential nominees. While John McCain has proclaimed himself the Republican frontrunner, the Democratic race remains deadlocked.

On Tuesday, Senator Hillary Clinton won the most coveted prize, the state of California, where exit polls show she won a commanding percentage of the Latino vote. She also took New York, New Jersey, Massachusetts, Arizona, Oklahoma, Tennessee and Arkansas.


Speaking before supporters in New York, Clinton vowed to take back the White House for the Democrats.


SEN. HILLARY CLINTON: I also want to congratulate Senator Obama for his victories tonight, and I look forward to continuing our campaign and our debates about how to leave this country better off for the next generation, because that is the work of my life. That is why I started my career fighting for abused and neglected children, children who had drawn the short straw in life, because this nation gave me every opportunity, and we can do the same for every child.

We must continue to be a nation that strives always to give each of our children a better future, a nation of optimists who believe our best days are yet to come, a nation of idealists holding fast to our deepest values, that we are all created equal, that we all deserve to fulfill our God-given potential, that we are destined for progress together.

It’s the ideal inscribed on the base of the Statute of Liberty in this great city that has overlooked our harbor through wars and depression and the dark days of September 11th, the words we all know that give voice to America’s embrace — “Give me your tired, your poor, your huddled masses, yearning to breathe free” — a constant reminder that here in America, we face our challenges and we embrace all of our people.

So today we say with one voice: give us the child who wants to learn, give us the people in need of work, give us the veterans who need our care. We say give us this economy to rebuild and this war to end. Give us this nation to heal, this world to lead, this moment to seize. I know we’re ready.

Thank you all, and God bless you.

AMY GOODMAN: Senator Hillary Clinton was speaking in her home city of New York. Senator Barack Obama was in his home city of Chicago.


SEN. BARACK OBAMA: It’s a choice between having a debate with the other party about who has the most experience in Washington or having one about who is most likely to change Washington, because that’s a debate that we can win. It’s a choice between a candidate who’s taken more money from Washington lobbyists than either Republican in this race and a campaign that has not taken a dime of their money, because we have been funded by you. You have funded this campaign.

And if I am your nominee, my opponent will not be able to say that I voted for the war in Iraq, because I didn’t, or that I gave George Bush the benefit of the doubt on Iran, because I haven’t, or that I support the Bush-Cheney doctrine of not talking to leaders we don’t like, because I profoundly disagree with that approach. And he will not be able to say that I wavered on something as fundamental as whether or not it’s OK for America to use torture, because it’s never OK. That is the choice in this election.

The Republicans running for president have already tied themselves to the past. They speak of a hundred-year war in Iraq. They talk about billions more in tax breaks for the wealthiest few, who don’t need them and didn’t even ask for them, tax breaks that mortgage our children’s future on a mountain of debt at a time when there are families who can’t pay their medical bills and students who can’t pay their tuition. Those Republicans are running on the politics of yesterday, and that is why our party must be the party of tomorrow, and that is the party that I intend to lead as president of the United States of America.


SEN. JOHN McCAIN: Tonight, my friends, we’ve won a number of important victories in the closest thing we’ve ever had to a national primary. We’ve won some of the biggest states in the country. We’ve won primaries in the West, the South, the Midwest and the Northeast. And although I’ve never minded the role of the underdog and have relished as much as anyone come-from-behind wins, tonight I think we must get used to the idea that we are the Republican Party frontrunner for the nomination for president of the United States. And I don’t really mind it one bit.

AMY GOODMAN: While John McCain won the most Republican delegates Tuesday, he only won nine of the twenty-one states voting, and he failed to win any states in the South. Former Arkansas governor Mike Huckabee swept Arkansas, Tennessee, Alabama and Georgia, as well as West Virginia. The victories were Mike Huckabee’s first since Iowa. On Tuesday, the former Baptist minister said the Republican race was now a two-man race between him and John McCain.


MIKE HUCKABEE: One of the reasons that we’re here tonight is because there’s no candidate who has been more consistent and clear about the fact that we should honor the words of our forefathers, who said all of us are created equal, and that means that every single person has intrinsic worth and value. And we should uphold the sanctity of human life, because it is a cornerstone of our culture of life.

AMY GOODMAN: Mitt Romney has vowed to stay in the race, despite losing in all the biggest states on Super Tuesday except Massachusetts, where he once served as governor.


MITT ROMNEY: We face extraordinary challenges. I’m convinced — and I mean this very sincerely — I’m convinced that if Washington continues on its same course, America will emerge not as the great nation of the twenty-first century by the end, but as a second-tier power. It will be passed by someone else. I can’t tell you who it will be, but it will be passed by someone else.

That will not happen. We’ll keep America strong, because we’ll hold onto the values that have always made us successful, values that Ronald Reagan and George Herbert Walker Bush and Teddy Roosevelt and other great presidents spoke about. They strengthened our military […] and they strengthened our economy. At the base of our ability to lead the world is a robust and powerful economy.

Right now, things are a little shaky. You hear people say, “Well, we’re hitting a rough spot.” It’s more than that. It’s more than just a rough spot. There’s a long-term slide that we’ve seen as we’re competing with people around the world — Asia, in particular — and as our pocketbooks are being emptied by the oil-producing states taking more and more money every single day from us. We can’t allow our economy to continue to be weakened by these other competitors. It’s time for us to lift America.

AMY GOODMAN: That was Mitt Romney speaking in Massachusetts, the state he won. 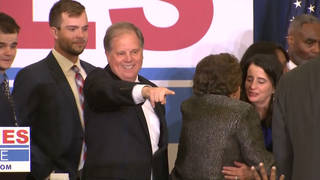 No Moore! Doug Jones Rides GOP Storm to Senate in Victory That Could Add Momentum to #MeToo Movement