Events are being held across the country today to demand a new trial for the Georgia death row prisoner Troy Anthony Davis. Davis, an African American, was convicted for the 1989 killing of a white police officer. Since the trial, seven of the nine non-police witnesses have recanted their testimony. There is also no direct physical evidence tying Davis to the crime scene. A thirty-day stay of execution expired on Saturday, following last month’s decision by a federal appeals court to reject a new trial for Davis. [includes rush transcript]

AMY GOODMAN: Events are being held around the country today to demand a new trial for the Georgia death row prisoner Troy Anthony Davis. Davis, African American, convicted for the 1989 killing of a white police officer. Since the trial, seven of the nine non-police witnesses have recanted their testimony. Three witnesses say another man later admitted to the killing. That man, Sylvester “Redd” Coles, was at the scene of the shooting and is one of the two witnesses who have not recanted their testimony against Davis. The other witness to stand by his testimony initially told police he could not identify the shooter except by his clothes. There is also no direct physical evidence tying Davis to the crime scene.


A thirty-day stay of execution expired Saturday, following last month’s decision by a federal appeals court to reject a new trial for Davis. Davis’s lawyers are filing last-ditch appeals today to the Supreme Court. The attorneys will ask that the case be sent back to a federal judge for an evidentiary hearing that would include witnesses whose testimony has never been heard in court.


Well, I’m joined now by two guests. Larry Cox is executive director of Amnesty International USA, which has vocally been championing Davis’s case. Larry Cox joins me here in the firehouse studio. Via video stream, we’re joined by Troy Davis’s older sister, Martina Correia. She has led the campaign to save her brother’s life.


Larry Cox, start off by laying out this case very quickly for people who aren’t familiar with it and why you’re so involved, why Amnesty is so involved.


LARRY COX: Because for those of us who have been working on this for a long time, and I’ve been doing it for more than three decades, I don’t know of another case that screams out injustice like this case. This is someone where seven of the nine witnesses, as you said, have recanted their testimony. There’s no physical evidence linking him to the crime. There’s such a strong presumption or such a reasonable doubt about his — that to put him to death would be really a crime upon a crime. So, we have — are deeply concerned about this case.


AMY GOODMAN: Yet, the federal appeals court had a two-to-one decision, although the dissenting judge in the case wrote, “To execute Davis in the face of a significant amount of proffered evidence that may establish his actual innocence is unconscionable and unconstitutional.”


LARRY COX: Yeah. What is most shameful about this is the way the courts have hid behind technicalities to not even look at the evidence. He has never had a chance to present this new evidence of innocence in a court of law. That’s all he’s asking. But they have hidden behind the technicalities, and that’s been easier to do because of the Antiterrorism and Effective Death Penalty Act, which makes it very, very difficult, even in cases where there’s strong evidence of innocence, to get it heard before a court.


AMY GOODMAN: Martina Correia, you have been fighting your own battle for life, as you fight breast cancer. You’re very well-known as a breast cancer survivor, fighter for people to get healthcare. You were honored along with Nancy Pelosi here in New York by the National Breast Cancer Coalition. President Jimmy Carter has issued an appeal on your brother’s behalf. Where does your hope lie right now, speaking to us from Savannah, Georgia?


MARTINA CORREIA: My hope lies with the people, because people are standing up all over the world in solidarity for Troy, in solidarity for justice. And that’s what it’s going to take. It’s going to take people to start demanding that these barbaric and archaic laws are repealed and never put on the books again. It’s going to take people fighting and saying that it should be an abomination that in the United States, one of the global powers of the world, that it’s not unconstitutional to execute an innocent person.


And so, we are standing, not only people from Amnesty International, but a coalition of organizations that have actually never come together, that are all saying we must stand against this, we must fight this injustice, and we need to end the death penalty, because we can’t afford to keep executing innocent people.


AMY GOODMAN: The case, with one person after another, the non-police witnesses, recanting their testimony, why did they give false testimony, to begin with? Let me put that to Martina.


MARTINA CORREIA: Well, you know, in the recantations, in the affidavits that these people put forth, you know, a lot of them had criminal background. Some of them were teenagers. Some of them were — they were interrogated for six and seven hours without lawyers, without parents, and they were, you know, threatened to be charged as accessory to murder of a police officer and to never come out of prison. And when you have those type of people that you can manipulate, and when you’re interrogating somebody for six and seven hours, like the witnesses said, they were so tired of being there that they just started repeating what the police wanted them to say. Some people — one person couldn’t even read and write the statement that he signed against my brother. He just wanted to leave. One witness had parole violations, and she was scared of losing her children and going back to prison. So these were people that were very easily manipulated.


They had really no case against Troy. They knew nothing about what was going on, until Sylvester “Redd” Coles, the only person that night that had a .38-caliber weapon, the same caliber weapon the police officer was killed with, that came forward with a lawyer and said, “Oh, Troy did it.” But he never told the police ’til some weeks later that he even was carrying a gun that night and that he got into an altercation.


So, the thing about it is that these people were easily manipulated. They built this case around Troy with no physical evidence, no DNA. And what they did is they ran on the excitement and the adrenaline that we have to get somebody for this police officer’s murder, we have to appease community. And, you know, it got to the point where they were attacking so many black men that it’s like any black man will do. And when Sylvester Coles came and pointed at Troy, everything dropped, and they just built a case around Troy.


AMY GOODMAN: Before we end this broadcast, I wanted to ask you, Larry Cox, about another case, about a man who is scheduled to die tomorrow.


AMY GOODMAN: His name is Dennis Skillicorn. Twelve current and former prison staffers at Potosi gave statements for his clemency petition. Their efforts were joined last week by the Missouri legislator Steven Tilley, the Majority Leader of the Missouri House, who has called for the commutation of Skillicorn’s sentence to life in prison. He doesn’t deny he’s been involved with crimes, though he wasn’t the shooter. Why are you pushing hard on this case? Why are these people all coming out?


LARRY COX: Well, there are two reasons. One is, it’s another example of the insanity of the system. Here’s another case where somebody made a statement that was never heard in the court, but if it had been heard, he probably would not have been given the death penalty. The man who did commit the murder said he had — Skillicorn had no idea that a murder was going to take place.


AMY GOODMAN: And that man is on death row, but he is not — he will not die before Skillicorn —-


LARRY COX: That’s correct, and one of the other people that was given life imprisonment. So it just shows the arbitrariness of it.


But the other reason is that Skillicorn himself has, by all accounts, become an extraordinary human being. And this illustrates one of the central truths about the death penalty, that the person you kill is often not the same person who committed the crime. He has become a model prisoner. He has reached out to the victims of crime, to restorative justice. He’s worked in a hospice. He has helped young offenders. And that’s the reason why you have this incredible assembly of people from the Corrections Department, you have Republicans, you have Democrats, you have people of faith, all speaking out, saying, “What purpose could possibly be served by killing this man, who has become, by all accounts, a very good man?”


AMY GOODMAN: In Dennis Skillicorn’s case, he said, “If I had three lifetimes, I know I can’t repay society for the things I’ve done, but I think we have a responsibility to build up what we once tore down with our criminal behavior.”


I want to thank you both for being with us. We just have ten seconds, but, Martina, what is Troy Davis saying today on this global day of action, your brother, on death row?


MARTINA CORREIA: Well, I actually just talked to Troy maybe like thirty minutes ago, and he said that he wants everybody to know that even though this is the hardest thing he’s had to face in his life, that he knows, with all of us, a change is coming and that that change is more powerful because people are standing up for human rights. And that’s what it’s all about. And he wants them know that continue to fight, that this is bigger than Troy Davis. This is about human rights for all.


AMY GOODMAN: I want to thank you for being with us, Martina Correia, from Savannah, Georgia. Her T-shirt, for our radio listeners, says, “I Am Troy Davis.” And Larry Cox, executive director of Amnesty International USA. You can go to our website at democracynow.org for all of our coverage of the Troy Davis case. 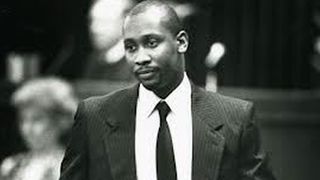