Renowned Indian physician and human rights activist Dr. Binayak Sen has been sentenced to life in prison. On Friday, Dr. Sen and two others were convicted in India on charges of sedition and conspiracy.

Described as Indian’s most famous political prisoner, Dr. Binayak Sen is known as the “physician of the poor.” He spent many years working as a doctor in the rural-tribal areas of Chhattisgarh in central India and reported on unlawful killings of indigenous people by the police and private militias.

The region is the site of intensifying conflict between India’s central government and the Maoist Naxalites.

In May of 2007, Dr. Sen was charged under the draconian Unlawful Activities Prevention Act and the Chhattisgarh Special Public Safety Act. The allegations against him ranged from helping the Maoist insurgency, being a member of a terrorist organization, to waging war against the Indian state.

In a statement released after his conviction, Amnesty International called Dr. Sen a “prisoner of conscience.” Asia-Pacific director Sam Zarifi said, “This sentence will seriously intimidate other human rights defenders who would provide a peaceful outlet for the people’s grievances…Amnesty International believes that the charges against Dr. Sen are baseless and politically motivated.”

Immediately after the sentencing on Friday, Dr. Sen was taken back into custody. He had been free on bail since May of 2009.

In May of this year, Democracy Now! producer Anjali Kamat had a chance to speak to Dr. Sen by telephone.

ANJALI KAMAT: Dr. Sen, you were the subject of an international campaign for your freedom. Would you say that you are free now?

DR. BINAYAK SEN: See, I was incarcerated for reasons that were not personal. And the reason there was an international campaign for my release is because there was — because I was incarcerated in a public cause. That was the general perception. And certainly no criminal acts have been even alleged against me, so far. Whatever acts I have been, you know, charged with are basically political in nature. So I take it as given that my incarceration had a political basis. And as a political case, I cannot have an individual freedom. And there is enormous amount of oppression, expropriation taking place across the country, with which we are still engaged, engaging. And also large numbers of people are in jail for reasons that we believe have very little to do with their acts, any acts that they might have performed. So, ’til such events continue and until such events are weighed in the — you know, granted the justice they deserve, I cannot count myself as being free.

ANJALI KAMAT: Do you believe the situation in India has gotten better or worse since your release, in terms of respecting people’s rights to struggle for more sustainable development?

DR. BINAYAK SEN: Without doubt, the situation has got worse since my release, and it is continuing to get — to worsen. One is that there has now been a fairly open campaign against human rights workers and civil society workers of every description. The military campaign in the areas — in some areas of the country has been stepped up, and the degree of violence has increased. And not only that, we also believe that the structural violence and the kind of poverty and dispossession that characterizes the poorest section of the population have — those phenomena have also got worse. So, all in all, a pretty bleak scenario.

ANJALI KAMAT: And can you comment on this law, the UAPA anti-terror law, that’s being used to intimidate journalists and intellectuals and to silence people who try and talk to Maoists?

DR. BINAYAK SEN: It’s not only people who try and talk to Maoists, but, as you said, civil society activists in general are being targeted by the UAPA, which basically has — it tries to establish guilt by association. And people arrested under the UAPA know — in general, one remarks that there is no cogent, credible evidence brought against them. So, we have — acts like the UAPA have been opposed in the past. Acts like the UAPA have been taken back in the past. We also note — we should also note that the acts like the UAPA are not only being deployed in India, because they are — this is a much more general worldwide phenomenon that is occurring under the guise of the war against terror. And we strongly oppose the deployment of such laws.

ANJALI KAMAT: Dr. Sen, earlier this year, there was a lot of fanfare about the fact that there’s, you know, so many billionaires in India who had made it to the Forbes list of billionaires. Can you talk about the other India, what poverty and hunger look like over 60 years after independence?

DR. BINAYAK SEN: Thirty-three percent of the adult population of India have a body-mass index below 18.5, which signifies chronic under-nutrition. Forty-five percent of children in India are malnourished by weight-for-age criteria. So, simply on the basis of anthropometric figures, we find that there is chronic hunger at work in the land.

And we are extremely apprehensive about the future of these sections of the population, who are also the ones who are being targeted in a massive drive for displacement and dispossession. These sections of the population are able to survive only because they are — they have access to common property resources, and when they are displaced and dispossessed from their access to common property resources, their situation worsens immediately. And we are very extremely apprehensive about the future health of these communities of malnourished people.

You started your question by talking about the Forbes billionaires. I think this is a mark of national shame, that there are people starving in this country and that the number of billionaires are going up. It’s nothing to be proud of. We are ashamed of it. Inequity is increasing all around.

ANJALI KAMAT: Dr. Sen. can you comment on the use of violence by both the Maoists and the state?

The second thing is that the state — the state has a dual role. We see it as having a dual role in the present situation. One is as the agency responsible for bringing about inequity and for providing certain services in this — across the country, but also as a guarantor of expropriation and of oppression in all kinds of situations. And which of these two aspects is to prevail is something that the people of every country have to decide for themselves through active engagement with these political issues.

And so — and we also feel that these issues, in any country, in any nation, these issues cannot be resolved within a particular framework. We need to have an international solidarity across the borderless nations. And we appeal to our brothers and sisters in the United States to engage with these issues, just as we are engaging with them here in India, and to [inaudible], so that we can build a peaceful and prosperous society together.

StoryOct 06, 2022Walking a Tightrope on Ukraine: How India Is Balancing Ties to Russia & United States 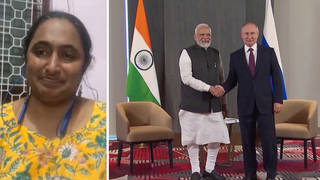 Walking a Tightrope on Ukraine: How India Is Balancing Ties to Russia & United States