COMING UP: Once-Banned Muslim Scholar Tariq Ramadan Returns to the US. Tune in Friday.

Scholar Tariq Ramadan was banned from the United States for six years. He’s just been allowed back in and arrived in New York on Wednesday night. Tune in to Democracy Now! Friday for an extended interview with Tariq Ramadan, Professor of Contemporary Islamic Studies at the University of Oxford in the UK.

He’s speaking at Cooper Union, New York Thursday night on Secularism, Islam, and Democracy: Muslims in Europe and the West

StoryNov 28, 2022From Xinjiang to Shanghai, Protests Grow in China over COVID Restrictions After Fatal Apartment Fire 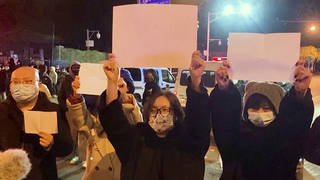 From Xinjiang to Shanghai, Protests Grow in China over COVID Restrictions After Fatal Apartment Fire