Mudslide Buries Scores of Homes in Indigenous Mexican Town, But Massive Toll Said to Be Averted

An indigenous town in the southern Mexican state of Oaxaca has been buried in mud and stones after incessant rain triggered a landslide early Tuesday morning. Access to the remote and impoverished town of Santa María Tlahuitoltepec has been restricted, with roads and bridges washed out by the rain or blocked by the landslide. Initial estimates suggested hundreds of people could be dead and up to a 1,000 people trapped in their homes, but Mexican authorities now say only eleven people have been confirmed missing. We go to Oaxaca to speak with filmmaker David Riker. [includes rush transcript]

AMY GOODMAN: An indigenous town in the southern Mexican state of Oaxaca has been buried in mud and stones after incessant rain triggered a landslide early Tuesday morning. Access to the remote and impoverished town of Tlahuitoltepec has been restricted, with roads and bridges washed out by the rain or blocked by the landslide. Initial estimates suggested hundreds of people could be dead, Tlahui, and up to 1,000 people trapped in their homes, but Mexican authorities now say eleven people have been confirmed missing.


This is the Oaxacan Governor Ulises Ruiz.


GOV. ULISES RUIZ: [translated] At this moment, there are no dead. There are eleven missing, supposedly eight children and three adults. We are going to wait, and the rescue teams that are working in the zone are going to continue advancing. I hope the information keeps changing and that the missing are alive. The information I have been getting since the morning keeps changing, fortunately, and the situation is not what I had thought it was.

AMY GOODMAN: The heavy rains and landslide are thought to be caused by Tropical Storm Matthew, which killed twelve people in Central America over the weekend. But the northern mountains of Oaxaca are also among the most deforested areas in the country. The town is home to some 9,000 indigenous people and is a mix of Mixe indigenous culture, well known for its musical traditions.


For more on the landslide, we go now to Oaxaca to Democracy Now! — by Democracy Now! video stream, to filmmaker Dave Riker. His films include La Ciudad — The City — and Sleep Dealer.


Well, we woke up this morning to the news that the environmental disaster in Tlahuitoltepec, known here mostly as Tlahui, was nothing like we had feared. Yesterday it was a terribly grim feeling in Oaxaca City, as many, many of the people here in Oaxaca City are from the Sierra Norte, and there was no communication with the village. But as you reported, it seems that the town escaped the tragic fate that had been suggested and that it may be as little as eleven or twelve people missing right now, and there are no confirmed deaths.


But just so that listeners understand, the rains here in Oaxaca and in much of southern Mexico have been unending. It’s rained for four — very, very heavily for the past four nights and four days. It’s felt — in the city of Oaxaca itself, it’s felt almost biblical. I have more than once been driving with the water almost coming in through the doors of the car and watching cars, you know, driving off into the gulch because the rain becomes so intense. Bridges all over the state have been broken or fractured. In Oaxaca City, the bridge to the airport has been fractured, which is causing a lot of problems. Three other bridges that are very important access roads to the city have been broken, where rivers have broken the banks.


And so, there is a sense of helplessness in the city and a sense that there’s no functioning authority to address any of the problems. Drivers, instead of — you know, they just start to drive on the sidewalks. And the only real hope for getting help to the people who have lost their homes in Oaxaca City — somewhere between five and twenty thousand people have been made homeless in the last eight days, since the first heavy rains a week ago Sunday — you know, our children are asked to bring canned goods to school, and neighborhood centers are being set up for people to bring donations, but there’s a sense that the state itself is not functioning and is invisible.


AMY GOODMAN: The issue of this community, can you describe it for us, its significance in Mexico?


DAVID RIKER: Yeah, Santa María Tlahuitolopec is in the Mixe region of the Sierra Norte of the northern mountains. The Mixe indigenous people are very proud to say that they’re the only people from Mexico who were never conquered by the Spanish. But its importance today is that it’s the most important center of traditional indigenous music in Mexico, of the Banda music, and it’s the center of a music school and training program that is one of its kind in the country. In fact, the students and teachers from Tlahui have now gone to Michoacán, where the P’urhépecha people, the P’urhépecha indigenous region is, and set up a very similar school. And that’s now the second most important musical center of its kind. So Tlahui has an importance beyond just the fact that it is one of many hundreds of small villages in the Sierra Norte, because it’s seen as a place that is preserving indigenous culture in a very, very vibrant way. And the thought that the whole village had been buried was overwhelming for all of us yesterday.


AMY GOODMAN: Dave Riker, the issue of global warming, of why this has happened, what caused this mudslide, of deforestation and other issues?


DAVID RIKER: Yeah, I think it’s important to remember that just a few months back, Oaxaca was suffering from a total lack of water. In neighborhoods all over Oaxaca City, people were going up to twenty days without any water. That means that the water that is sent in from the central system simply was not sent in. No water comes into the taps. The only option for bathing or washing is to buy water from water trucks, which is very expensive, far too expensive for most people. And these rains are going to end, and when January, February, March comes around next year, it will be the same thing. There will be battles and fights over lack of water. So we have these extremes.


In fact, if you look at the state-wide picture right now, not talking about the immediate problems of these floods, the real problem is a lack of water. And communities are struggling all over the state to be able to water their milpa, their — you know, their corn. In one of the more interesting contradictions of Oaxaca, in the southern central valley, about an hour from Oaxaca City, farmers have been told that they are not allowed to dig wells anymore. And they, the farmers, have said that the reason is that the water from their aquifer is being diverted entirely to one of the big mining projects going on in a town called San José del Progreso, which is being opened up by a Canadian mining firm. And there are a number of mining projects which are in need of this water. So you have a situation where there is no water making it into the urban center. Oaxaca City has a million people. Just so listeners know, Oaxaca has a population of about three million. One-third of the Oaxacan people are in the United States, a vast majority of them in California. Another third are now in Oaxaca City, which not long ago was a small, traditional, historic city. It’s now sort of a huge, enormous third world city. And so, people have not been able to support themselves in their villages. And the sort of the irony is that these are fruits of NAFTA fifteen years on, that there’s been an enormous migration to the United States and to Oaxaca City, but also that the basic commodities now are the main source of, you know, agrarian battles.


The deforestation, as you mentioned in the header, the Sierra Norte, the northern mountain range, has been heavily deforested. And what I guess I would just like to add is that the main feeling you get living here is that any hope comes from below, that the state and the institutions of the state are either completely nonexistent or nonfunctioning and not at all interested in dealing, in addressing any of these problems. But people at the local level, the neighborhood level, are. And so, for example, one of the most inspiring things I’ve seen since living here is the way in which villages themselves are reforesting their own mountains. We’ve been — as a family, we’ve been on these reforestation programs, where villages are literally planting up to ten million trees, and pine trees. And in the Mixteca region, one of the most extraordinary programs that’s underway, that’s been recognized by the Goldman Environmental Prize, is a group called CEDICAM, who are using ancient indigenous traditional farming techniques to restore water to the aquifer by digging canals, deep canals, that run along the contours of their mountains. And they’ve been doing it now for twenty years, and they’re seeing the results, where they’ve turned highly eroded, barren land into green agricultural havens. And they’re doing it with pickaxes and shovels.


So, you have a picture in Oaxaca of — there are weather extremes, no doubt. And I know that — you know, one of our friends told me yesterday that her daughter in school was encouraged to pray yesterday. The whole class was encouraged to pray, because of the rains. And many of the people that I’ve spoken to in the last few days from the Sierra Mixe and the Sierra Norte say something very similar, that all we can do is pray. But it’s clear that what really needs to be done is to organize and to begin addressing the human reasons for these, because the rains alone are not causing this devastation. The deforestation in the mountains, the lack of any investment in social infrastructure in the city, the sense of a total administrative chaos as a rule of thumb in Oaxaca means that none of these problems are being addressed. There’s no plan for addressing the future, and it’s going to get worse in Oaxaca and in all of southern Mexico.


AMY GOODMAN: Dave Riker, I want to thank you very much for being with us. Dave is an American filmmaker based in Oaxaca, Mexico. His films include La Ciudad and Sleep Dealer. Thanks, Dave.

“The Warmth of Other Suns: The Epic Story of America’s Great Migration”: Isabel Wilkerson Tracks Exodus of Blacks from US South

NEXT“The Warmth of Other Suns: The Epic Story of America’s Great Migration”: Isabel Wilkerson Tracks Exodus of Blacks from US South 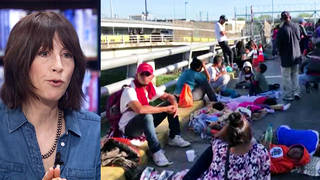