Organized labor will serve notice today on the bankers and the politicians that the young protesters of Occupy Wall Street speak for millions.

Tens of thousands of transit and city workers, teachers, and maintenance and hospital workers are expected to march to Zuccotti Park late today in a show of solidarity.

The labor rally will signal just how far unions have come since that infamous day 41 years ago, when bands of construction workers rampaged through the Financial District and City Hall. Back then, the hardhats brutally beat scores of youths protesting the Vietnam War.

Now the young people and the unions are on the same side.

“The whole order of things today is absolutely upside down,” said John Samuelsen, president of the Transport Workers Union Local 100. “Tax breaks for millionaires, working people suffer, and no jobs for these kids.”

Establishment critics of the Zuccotti Park events have no clue what is happening. By setting up camp near the scene of Wall Street’s still-unpunished crimes, and by persevering round the clock for nearly three weeks, these kids have created a boot camp for social change.

There was, for instance, the wide-eyed couple newly arrived yesterday from Catasauqua, Pa. Colin Muth and Taylor Anderson, both 20, were clutching backpacks and sleeping blankets under their arms.

“We came because we’ve got to do something to reduce the wealth gap,” Muth said.

“I had to drop out of community college because I can’t afford it,” Anderson said. “We’re here to learn how this is done so we can go back home and occupy Bethlehem.” 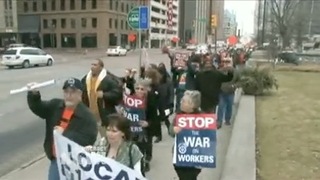