In 2010, then-Ambassador Pablo Solón headed Bolivia’s climate negotiating team for the U.N. Climate Change Conference in Cancún, Mexico. However, for this year’s climate summit he joined climate justice activists outside the official conference in the streets of Durban demanding the United States, and other historically large greenhouse gas emitters, agree to legally binding emissions cuts. “Developed countries, like the U.S., Europe, Japan, Russia, are just trying to avoid their responsibility when it comes to greenhouse emissions cuts,” says Solón. “So, that is the real outcome out of Durban, and that is why there is so much concern around the world, because, especially the developing countries, the poor nations, and the poor people around the world, even in the United States, are going to be those ones that are going to suffer the consequences of this. That is why we call it a climate apartheid.” [includes rush transcript]

AMY GOODMAN: In a moment, we’re going to hear excerpts of the speeches of this year’s Nobel Peace Prize winners, in just a moment. But first we’re going to Latin America, to Bolivia, La Paz, to speak with Pablo Solón. He is Bolivia’s former ambassador to the United Nations, also served as Bolivia’s chief negotiator on climate change until these latest talks. He served as the climate chief negotiator in Cancún and Copenhagen before that. And when we were in Bolivia covering the People’s Summit on Climate Change and the Rights of Mother Earth, Pachamama, he was there, as well.

Pablo Solón, we just have a few minutes, but you have just arrived back from Durban, South Africa, to your home in La Paz. Your reaction to the deal that was struck in Durban?

PABLO SOLÓN: We can call this the “climate apartheid,” in all senses. First, you know, when I was leaving the plane, leaving Durban, many chief negotiators were leaving with me, and the COP 17 didn’t conclude at that time. So, only few nations have decided for the rest of the world.

The second thing is that they have decided not to do deep cuts now, so we are going to see a very severe increase in the temperature in the coming years, and this will be known as the lost decade.

The other issue is that the only real outcome, because it’s not true that the second commitment period of the Kyoto Protocol has been adopted in Durban—that is not true, it has been postponed until COP 18—but what is true is that they have adopted and secured a carbon market mechanism, so that they can continue, even if there is no second commitment period of the Kyoto Protocol. And the Green Climate Fund has no funds. It hasn’t been approved, which source will guarantee that figure of $100 billion by the year 2020. So, in one way, it’s a very empty package when it comes to climate, but it’s a good package when it comes to business of carbon markets.

AMY GOODMAN: Can you explain how we got to this point? I mean, you occupy a very interesting position, because you were inside for a long time, both as Bolivia’s U.N. ambassador and the chief climate change—climate negotiator for Bolivia. Now, in Durban, you were outside. You were one of the activists who was there, among thousands around the world. Explain to people what happened, and for those in the United States who don’t follow climate change politics very much—it’s considered one of the lowest rungs of concerns of people here in the United States—what even the significance of the Kyoto Protocol is, what it means to have a second, or not have a second, commitment period, not to mention the Global Climate Fund, which most people know nothing about.

PABLO SOLÓN: Well, to put it in other words, we know that the temperature is increasing because there are greenhouse gases in the atmosphere. They have already reached a level that has increased the temperature in almost one degree Celsius. So, if this continues, we are going to see a dramatic situation all around the world. The U.S. has already suffered an impact with the Hurricane Katrina. And this can be multiplied by four, by six. So, the key issue was, are we going to reduce greenhouse gas emissions in Durban? Are we going to have any kind of agreement to do that now during this decade? And the result is, everybody is going to do whatever he wants to do. That is the real outcome.

If there would have been a second commitment period of the KP, and the U.S. would have said, “OK, we are going to reduce an amount of 20, 25 percent,” we could have said, “OK, we’re in a bad situation, but we are doing our best in order to get out of this.” But now we can say, “We are in a bad situation, and we are doing our best to be in a worse situation, because nobody wants to do nothing.” Developed countries, like the U.S., Europe, Japan, Russia, are just trying to avoid their responsibility when it comes to greenhouse emissions cuts. So, that is the real outcome out of Durban, and that is why there is so much concern around the world, because, especially the developing countries, the poor nations, and the poor people around the world, even in the United States, are going to be those ones that are going to suffer the consequences of this. That is why we call it a climate apartheid.

AMY GOODMAN: I want to thank you for being with us again, Pablo Solón, Bolivia’s former ambassador to the U.N., former chief climate negotiator at the Copenhagen and Cancún talks. Today, in these last two weeks, he was one of the activists on the outside of the Durban talks. This is Democracy Now!, democracynow.org, The War and Peace Report. To see our full coverage of the two-week negotiations that took place in Durban, South Africa—we just returned last night from South Africa—you can go to our website at democracynow.org. It’s Climate Countdown. This is Democracy Now! Back in a minute. 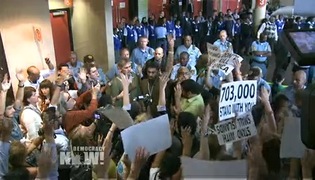