On Saturday, the 2011 Nobel Peace Prize was presented to three female activists and political leaders for “their non-violent struggle for the safety of women and for women’s rights.” The trio of laureates follow only a dozen other women among 85 men, as well as a number of organizations, to have won the peace prize over its 110-year history. We play excerpts from their acceptance speeches. “The Nobel Committee cannot license us, our three laureates, to speak for women, but it has provided us a platform from which to speak to women,” notes Liberian President Ellen Johnson Sirleaf, who was awarded the prize for her human rights work and the progress her country has made since she took office in 2006 as the first democratically elected female head of state on the African continent. “There is no time to rest, until our world achieves wholeness and balance, where men and women are considered equal and free,” notes Leymah Gbowee. Her “Women for Peace” movement is credited by some for bringing an end to the civil war in 2003. The movement started humbly in 2002 when Gbowee organized a group of women to sing and pray for an end to fighting in a fish market. “The Nobel Prize did not come only as a personal prize for Tawakkul Abdel-Salam Karman, but as a declaration in recognition of the whole world for the triumph of the peaceful revolution of Yemen and as an appreciation of the sacrifices of its great, peaceful people,” says Tawakkul Karman, the first Arab woman to win the Nobel Peace Prize and the youngest winner of the peace prize to date, slightly edging out the Irish activist Mairead Corrigan, who won in 1976. Both were 32. [includes rush transcript]

AMY GOODMAN: On Saturday, the 2011 Nobel Peace Prize was presented to three women activists, political leaders, for, quote, “their non-violent struggle for the safety of women and for women’s rights [to] full participation in peace-building work.” This is an excerpt of what all three women had to say.

TAWAKKUL KARMAN: [translated] We were very happy, because we realized at that time that the Nobel Prize did not come only as a personal prize for Tawakkul Abdel-Salam Karman, but as a declaration and recognition of the whole world for the triumph of the peaceful revolution of Yemen and as an appreciation of the sacrifices of its great, peaceful people.

LEYMAH GBOWEE: There is no time to rest, until our world achieves wholeness and balance, where men and women are considered equal and free.

PRESIDENT ELLEN JOHNSON SIRLEAF: The Nobel committee cannot license us, our three laureates, to speak for women, but it has provided us a platform from which to speak to women, women around the globe.

AMY GOODMAN: That was Liberian President Ellen Johnson Sirleaf; before that, Leymah Gbowee; and before that, the first Arab woman to win the Nobel Peace Prize, Tawakkul Karman. We’re going to spend the rest of the hour with the winners, playing excerpts from their addresses. First we’ll hear from Liberian activist Leymah Gbowee.

LEYMAH GBOWEE: Let this recognition serve as a renewed compact between women and world leaders that commitments made to women through various U.N. and other global institutions’ resolution will be pursued with greater commitment and vigilance. Let this be a renewed compact that the integrity of a woman’s body and the sanctity of women’s lives will not be subsumed under male-invented traditions.

To the women of Liberia and sisterhood across West Africa, who continue to band together to respond to crises in our sub-region, to women in Asia, the Middle East and the world, as we celebrate our achievement through this recognition, let us remind ourselves that victory is still afar. We must continue to unite in sisterhood to turn our tears into triumph, our despair into determination, and our fears into fortitude. There is no time to rest until our work achieves wholeness and balance, where men and women are considered equal and free.

And finally, Liberian women, thank you for making our country proud. Thank you for sitting in the rain and in the sun. This is your prize. This is our prize. The world used to remember Liberia for child soldiers, but they now remember our country for the white T-shirt women. Who would have ever thought that the Liberian women would have been among the faces of women’s global victory? But you did it. Thank you.

AMY GOODMAN: That was Liberian activist Leymah Gbowee. Liberian President Ellen Johnson Sirleaf was awarded the Nobel Peace Prize for her human rights work and the progress Liberia has made since she took office as president in 2006. In 2005, President Johnson Sirleaf won the elections in Liberia, making her the first democratically elected female head of state on the African continent. She was just re-elected. This is an excerpt of her Nobel Peace Prize acceptance address.

PRESIDENT ELLEN JOHNSON SIRLEAF: Your majesties, your royal highnesses, members of the Norwegian Nobel Prize Committee, fellow Nobel laureates, dear friends, compatriots, brothers and sisters, ladies and gentlemen, on behalf of all the women of Liberia, the women of Africa, and women everywhere in the world who have struggled for peace, justice and equality, I accept with humility the 2011 Nobel Peace Prize.

I am particularly honored to be a successor to the several sons and one daughter of Africa who have stood on this stage: Chief Albert John Luthuli, Archbishop Desmond Tutu, Nelson Mandela and F.W. de Klerk, Kofi Annan, Anwar al-Sadat, Wangari Maathai, Mohamed ElBaradei, as well as Barack Obama, Martin Luther King, Jr., and Ralph Bunche—Americans of African descent.

Your majesties, I begin with a message to you, and through you, to the people of Norway. Your country faced a tragedy earlier this year with the murder of 77 people. It was a deliberate assault on the very heart of your society. Yet, in the face of such adversity, a response at every level, public and private, of Norwegian life has been consistent with your historic adherence to the values of openness, integrity and justice. For this, the world admires you. And all the citizens of this great country, I offer you the deepest sympathy of the people of Liberia for the loss of life, and I extend to you our profound respect.

In its selection this year, the Nobel Committee has brought here three women, linked by their common commitment to change and in their effort to promote the rule of law and democracy in societies riven by conflict. The fact that we, two women from Liberia, are here today to share a stage with a sister from Yemen speaks to the universality of our struggle. The enduring spirit of the great women whose work transcended gender and geological boundaries is in this room with us today. From Baroness Bertha Felicie Sophie von Suttner of Austria, honored for promoting the Hague Peace Conference in 1899, to Jane Addams of Hull House fame, from American activist Emily Greene Balch to Betty Williams and Mairead Corrigan of Northern Ireland, from Mother Teresa to the heroic Aung San Suu Kyi, as well as Rigoberta Menchú, Jody Williams, Shirin Ebadi and Wangari Maathai, these are our forebears. Those women who are Nobel Peace laureates, they have challenged us to redouble our efforts in the relentless pursuit of peace.

I would like to take a moment to honor the memory of the late Wangari Maathai, the first African woman to receive this great honor. Her accomplishments will forever inspire us. Accepting the award in December 2004, Wangari said, and I quote, “Those of us who have been privileged to receive education, skills and experiences, and even power, must be role models for the next generation of leadership.” May we all resolve to fulfill that duty.

I also honor the memory of countless women whose efforts and sacrifice will never be recognized and who, in their private and silent struggles, helped to shape our world. As Leymah and Tawakkul knows, this award belongs to the people whose aspirations we have the privilege to represent and whose rights we have the obligation to defend. We are but their reflection. With such distinction comes great responsibility. History will judge us not by what we say at this moment in time, but what we do next to lift the lives of our countrymen and women. It will judge us by the legacy we leave behind for generations to come.

Tawakkul, you are an inspirational leader, an activist for peace and w omen’s rights. In your country, autocratic rule prevails, but where they had no voice, you found a way to be heard.

Leymah, you are a peacemaker. You had the courage to mobilize the women of Liberia to take back their country. You redefined the front line of a brutal civil conflict: women dressed in white, demonstrating in the streets—a barrier no warlord was brave enough to cross.

Mine has been a long journey, a lifetime journey to Oslo. It was shaped by the values of my parents and my two grandmothers—indigenous Liberian farmers and market traders—neither of whom could read or write. They taught me that only through service is one’s life truly blessed. My journey was supported by the many teachers and mentors who guided me to a world opened up by the enlightenment of higher education, which led to my conviction that access to quality education is the social justice issue of our times.

My life was forever transformed when I was given the privilege to serve the people of Liberia, taking on the awesome responsibility of rebuilding a nation nearly destroyed by war and plunder. There was no road map for post-conflict transformation. But we knew that we could not let our country slip back into the past. We understood that our greatest responsibility was to keep the peace.

AMY GOODMAN: The winner of the 2011 Nobel Peace Prize, Liberian President Ellen Johnson Sirleaf. Before that, Liberian activist Leymah Gbowee. Tomorrow on Democracy Now!, an excerpt of the speech of Tawakkul Karman of Yemen, the first Arab woman to win the Nobel Peace Prize. This trio of laureates follow only a dozen other women, among 85 men, as well as a number of organizations, to have won the Nobel Peace Prize over its 110-year history. Again, it was awarded on International Human Rights Day this past Saturday. To see our interviews with past Nobel Peace Prize winners, from the late Kenyan environmentalist Wangari Maathai to Shirin Ebadi, the Iranian human rights activist, to the former South African Archbishop Desmond Tutu and many others, you can go to our website at democracynow.org. 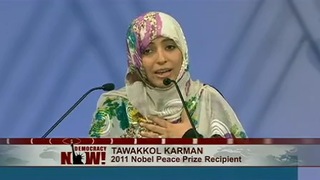