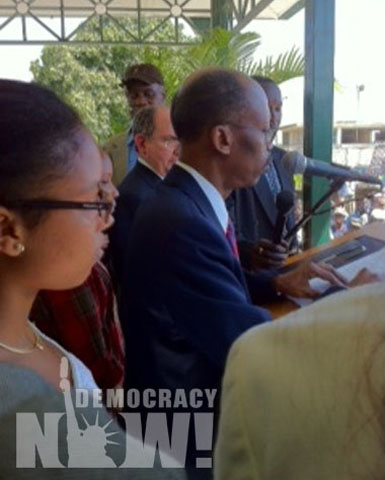 Listen to this report here

I’m Amy Goodman, we just landed in Port au Prince. The former president of Haiti, Jean-Bertrand Aristide has landed. We made it through a mad crush of over a thousand journalists, videographers, supporters, dignitaries at the airport. I am now standing on the veranda of the airport where Pres. Aristide is addressing the crowd. He is saying we will not forget the victims of the earthquake. He is addressing what it means for him to be here. This is an historic day, a president who was twice ousted by U.S. backed coups in 1991 and 2004. He has returned both times, the first time after three years in exile he returned as president of Haiti. This time, after being ousted in 2004, he has returned as a resident of Haiti rather than the president. He says his aspirations are to be an educator, or to do what the people of Haiti want him to do.

I interviewed him on the plane, as well as his wife, former first lady Mildred Aristide. They talked about their dreams becoming a reality. President Aristide says he doesn’t know what today will bring. If people want to meet to talk about reforming the medical school he is there to do that. He says now he responds to the will of the Haitian people.

This is Amy Goodman broadcasting from Port Au Prince, Haiti, just off the flight that the Aristide’s have taken from Johannesburg, South Africa to Port Au Prince, Haiti. The jet was provided by the South African government under serious protest by the United States. President Obama personally called South African President Zuma earlier this week to tell him not to do this. But the statement of the South African government was simply, “we will not bow to pressure.” They flew the Aristide’s home, which is where former President Aristide, his wife and his two daughters are today. Pres. Aristide addressing the crowd.

The security is very intense. I am inside the cordon so it is hard to know what is going on outside. It is is mainly journalists, videographers. The crush of the journalists was quite amazing. Aristide expressed concern that security would be used to keep people away, something he did not want. He said he left protocol to the Haitian government. It was Haitian president Preval in his last days in office who has given Aristide the diplomatic passport he needed to come back home.

I see people holding Haitian flags, people in military uniform, men in suits. He is now speaking in English. At the airport in Johannesburg he spoke only in African languages to say goodbye to the people of South Africa. Now he is speaking in English, after speaking in Creole and French. He is talking about languages, Africa’s connection to Haiti.

One of the things he said in the interview with me was that this trip only took only took us something like 16 to 18 hours. But you think of the Africans who were brought to this hemisphere who were enslaved, and he said the seven years he has been in exile do not compare to that. He is ready to work for the people of Haiti now, he says.

Speaking in English to reporters, he says in 1804 Haiti was born out of slavery. While he was in South Africa he got another doctorate, this one in African languages. He is a student of languages. He says, “Gracias.”

Danny Glover is smiling. Aristide is surrounded by his daughters and his wife. It is pretty clear that they’ve only let journalists in. That is the extent of people here.

Visit our live blog for ongoing updates and photos from Haiti.